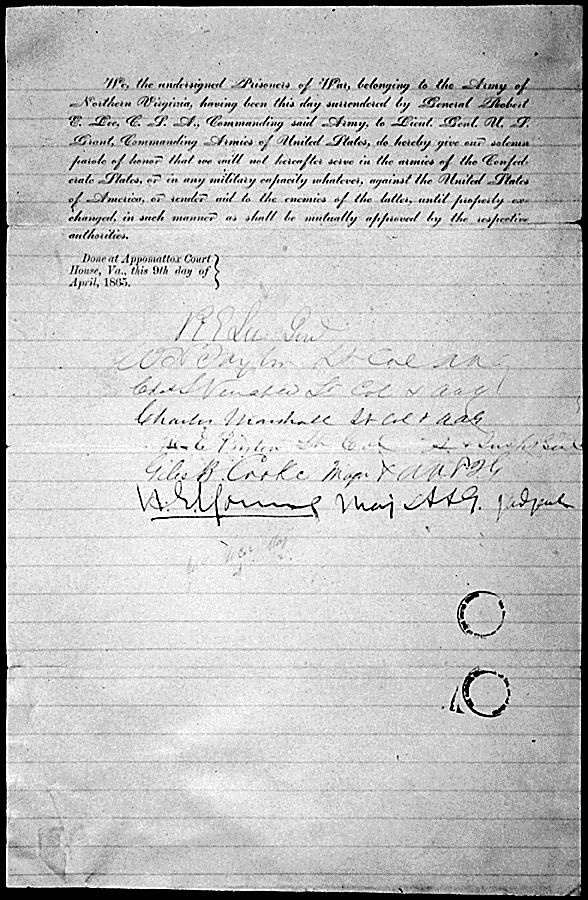 On a spring day 140 years ago, Union Gen. Ulysses S. Grant and Confederate Gen. Robert E. Lee met face to face in the parlor of Wilmer McLean's house in Appomattox Court House, Virginia. On that historic occasion, April 9, 1865, the two generals formalized the surrender of Lee's Army of Northern Virginia, thus bringing an end to four years of fighting between North and South.

After agreeing upon terms of the surrender, the generals each selected three officers to oversee the surrender and parole of Lee's army. Later that day, Lee and six of his staff signed a document granting their parole.

On May 29, 1865, President Andrew Johnson issued a Proclamation of Amnesty and Pardon to persons who had participated in the rebellion against the United States. There were fourteen excepted classes, though, and members of those classes had to make special application to the President.

Lee sent an application to Grant and wrote to President Johnson on June 13, 1865:

"Being excluded from the provisions of amnesty & pardon contained in the proclamation of the 29th Ulto; I hereby apply for the benefits, & full restoration of all rights & privileges extended to those included in its terms. I graduated at the Mil. Academy at West Point in June 1829. Resigned from the U.S. Army April '61. Was a General in the Confederate Army, & included in the surrender of the Army of N. Va. 9 April '65."

On October 2, 1865, the same day that Lee was inaugurated as president of Washington College in Lexington, Virginia, he signed his Amnesty Oath, thereby complying fully with the provision of Johnson's proclamation. But Lee was not pardoned, nor was his citizenship restored. And the fact that he had submitted an amnesty oath at all was soon lost to history.

More than a hundred years later, in 1970, an archivist at the National Archives discovered Lee's Amnesty Oath among State Department records (reported in Prologue, Winter 1970). Apparently Secretary of State William H. Seward had given Lee's application to a friend as a souvenir, and the State Department had pigeonholed the oath.

In 1975, Lee's full rights of citizenship were posthumously restored by a joint congressional resolution effective June 13, 1865.

At the August 5, 1975, signing ceremony, President Gerald R. Ford acknowledged the discovery of Lee's Oath of Allegiance in the National Archives and remarked: "General Lee's character has been an example to succeeding generations, making the restoration of his citizenship an event in which every American can take pride." 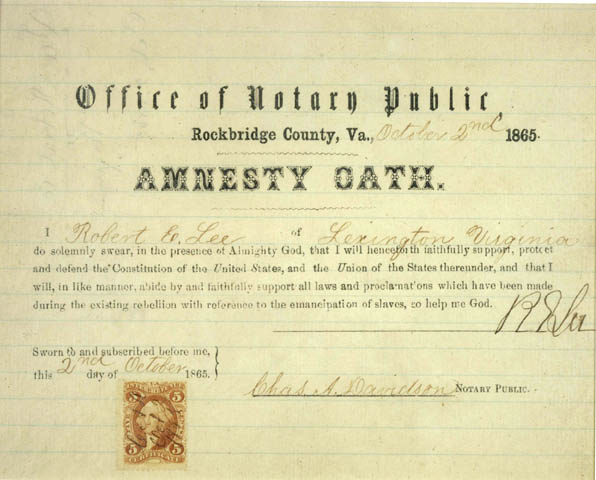 Lee signed his Amnesty Oath on October 2, 1865, but was not restored to full citizenship in his lifetime. (General Records of the Department of State, RG 59)