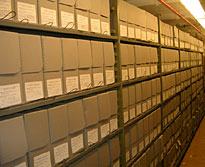 The records that created and have nurtured this country—billions of pages of paper, miles and miles of tape and film, and many terabytes of digital impulses—are essential to an open and transparent democracy such as ours.

With these records, Americans hold their government officials accountable, guarantee individual rights and entitlements, and preserve the nation's history for future generations. But these documents are of little use or benefit to citizens unless they have access to them.

Those concerned with maximizing timely access to public records government-wide, as we are at the National Archives and Records Administration (NARA), received encouragement this year as a result of some developments in policy and change of mood in Washington.

Congressional action on a range of measures involving access has sparked a significant public and media dialogue on issues related to administering presidential records, which strikes this observer as fundamentally healthy. This has been accompanied by wide-ranging expressions of general support (whatever the difficulties in implementation) for increased "bipartisanship" in government policy-making, which have come from the President and the new leaders in Congress. Although I am under no illusion that benign rhetoric will lead inexorably to policy agreement, often it is an essential precondition for such agreement.

In a speech this spring at the Freedom Forum First Amendment Center in observance of National Freedom of Information Day, I reviewed the initiatives we have under way at NARA to increase access to the records we preserve for the American people.

I was especially pleased to be invited to speak on the day that commemorated the Freedom of Information Act (FOIA) because I filed and won in 1975 the first FOIA lawsuit against the FBI for files of historical interest. However, neither I nor anyone else at the time could have predicted the vast and complex influence of FOIA on American economics, politics, and society and its pivotal role in maintaining a robust democracy.

In fiscal year 2006, NARA completed more than 80 percent of FOIA requests for executive branch agency records within 20 working days. The on-time rate of 83.89 percent, while under our target goal, was nonetheless six percentage points above the year-before rate of 77.41 percent. And nearly three-quarters of all FOIA requests were completed in 10 working days—half the time the law requires.

There are various reasons why some FOIA requests require more time to fulfill. The records may have been destroyed in the 1973 fire in St. Louis, they could be classified, or they may require a presidential review or a longer review because of their specific content. But we believe that, on the whole, NARA is making progress in expanding access to government records.

In the past year or two, a wide variety of records have been opened, both in response to FOIA and as a result of systematic reviews. They include the files of then-Supreme Court nominees John Roberts and Samuel Alito, the post-presidential papers of Dwight Eisenhower, the personal papers of Rose Kennedy, 60 additional hours of Lyndon Johnson's phone conversations, National Security Council files from the Ford administration, domestic policy papers from the Clinton White House, portions of files from independent counsels from the Iran/Contra and Whitewater investigations, and the official and confidential files of J. Edgar Hoover.

Despite the generosity of the President's 2008 budget request for this agency, fulfilling our mission will require additional resources. Still, NARA has made visible progress on a number of its strategic goals in the past two years—goals of greater access to our holdings:

All of these efforts are the work of a dedicated NARA staff who are the stewards of America's documentary heritage. Day in and day out, they work to bring more records to open shelves and help researchers find and understand the records they seek. It is a privilege to work with these individuals to remove the cloak of secrecy from as many of the records of our democracy as possible.