The Magna Carta Returns to the Archives

Serendipity can play an important role in our lives.

One of the more serendipitous occurrences in my own life occurred in December of 2007. On a return flight from overseas, I happened to see in my mail file an invitation to a pre-auction reception for a 1297 copy of the Magna Carta. The reception happened to be that night in New York City, and I happened to be landing in New York just in time to get to the reception. So I quickly decided to go, to see this most famous of all documents.

When I arrived at the reception, I met the curator in charge of shepherding the Magna Carta to a successful sale. She informed me that the copy being auctioned belonged to former presidential candidate Ross Perot, who was selling the document to enable his foundation to fund Iraqi war veterans' medical expenses. He had owned the document since 1984, when he purchased it from a British family who had owned it for more than 500 years; he had subsequently lent it to the National Archives, where it had been generally on display since the early 1980s.

I was also informed by the curator that Mr. Perot had not placed any constraints on the document's sale. It was thus widely believed—and feared—that a wealthy individual from another country would likely purchase the document and remove it from the United States. It turned out that, of the 17 copies of the historic document still in existence, this was the only one owned by a private citizen and the only one in the United States. Fifteen copies reside in British institutions, and the other one is displayed in the Australian parliament. None of these copies, I was told, is likely to ever be sold.

These facts struck me as particularly unfortunate, for the Magna Carta—while a product of the 13th century in England—actually had a significant impact on our government and on our basic rights. 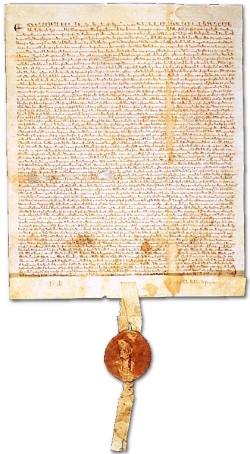 A Last-Minute Decision
To Attend an Auction

The Magna Carta's principles of due process, trial by jury, habeas corpus, and no representation without taxation, among others, were central to British common law. And that common law was the foundation of our own democracy. For that reason, each of the colonies embodied most of these principles in their governing structures, and the Founding Fathers also placed them in the heart of the Declaration of Independence and the Constitution (and, later, the Bill of Rights).

So I thought it would be appropriate to try to keep this copy of the Magna Carta in the country—to ensure that Americans could continue to see it, and to thereby be continuously reminded of its importance to our country. I resolved that evening to return to New York from Washington, D.C. (my home), the next night and to win the auction.

Having never been to a major auction in my life, I was not sure exactly how best to proceed. Imagine my surprise when, upon returning the night of the auction, the curator ushered me into a small unoccupied room and instructed me pick up a telephone to hear the auction and to communicate any bids to her. This was a far cry from the bustling auction floor so often depicted in movies and on television. But I gathered that many of the bidders on particularly valuable or newsworthy objects do not want to be seen bidding (or winning), and these private rooms are a solution.

The bidding soon commenced, and after several rounds of competitive bidding, I was delighted—and surprised—to hear that my final bid won the auction.

I was then told by the auction house's officials that I could slip out a side door and keep the new owner and the new whereabouts of the Magna Carta a secret (presumably forever).

I decided, though, that I wanted the public to know right then that I intended to place the document on long-term loan to the National Archives as a gift to the country and as modest repayment of my debt to this country for my good fortune in being an American. I said this in front of scores of reporters gathered at the auction and shortly thereafter called the Archivist of the United States to let him know of my plans. The Archivist at that time, Allen Weinstein, was quite pleased.

Despite the Magna Carta's historical significance, not many people are aware of the document's complicated history.

In brief, in the early 13th century, England and parts of France were essentially one country ruled by a monarch, King John. During this period, John orchestrated several wars in mainland Europe to recover land that he had inherited but which was no longer under his control.

To finance these wars, and to rebuild the official coffers, John demanded scutage (a fee paid in lieu of military service) from the barons who had refused to join the war effort. The barons in question began a series of protests, eventually capturing the city of London. It was at this point that King John agreed to meet with the barons to settle their grievances.

That occurred on June 15, 1215. John met with approximately 100 barons on the plains of Runnymede, not far from present-day Windsor Castle in London. They collectively agreed to a peace settlement under which the king would grant the barons certain rights. The original document—written in Latin—included 63 key provisions, among which were guarantees of the writ of habeas corpus, the right to a trial by a jury of peers, punishment proportionate to the crime, and no taxation without representation. These provisions satisfied the barons' demands, and peace was restored for a time, though, it turned out, only for a short time.

The problem with the agreed-upon Magna Carta was that it was soon refuted by Pope Innocent III, who reacted negatively to a provision that established a committee of 25 barons who could at any time meet and overrule the will of the king. Viewing this as an affront to the authority of the Crown and the Church (to which the Crown was essentially subordinate), the pope objected to the agreement (effectively forcing the king to annul it), sparking a civil war in England that would last until John's death in October 1216.

John's nine-year-old son Henry was then crowned Henry III. Henry's regent, William Marshall, reissued the Magna Carta in November 1216, minus the principal offending clause mentioned above. This version would stay in effect until 1225, when Henry III, upon official assumption of the throne at age 18, issued a shorter version of the Magna Carta.

When Henry III's son Edward I became king, he found himself in the same situation as his grandfather—in need of money to reclaim lands in France. To secure that money from his subjects, the new king was forced, while at war out of England, to issue a new version of the Magna Carta.

David M. Rubenstein is co-founder and managing director of The Carlyle Group, a global private equity firm, and chairman of the board of the John F. Kennedy Center for the Performing Arts.