The Fate of Mali Kaltman

The Value of Immigration Records and Genealogy 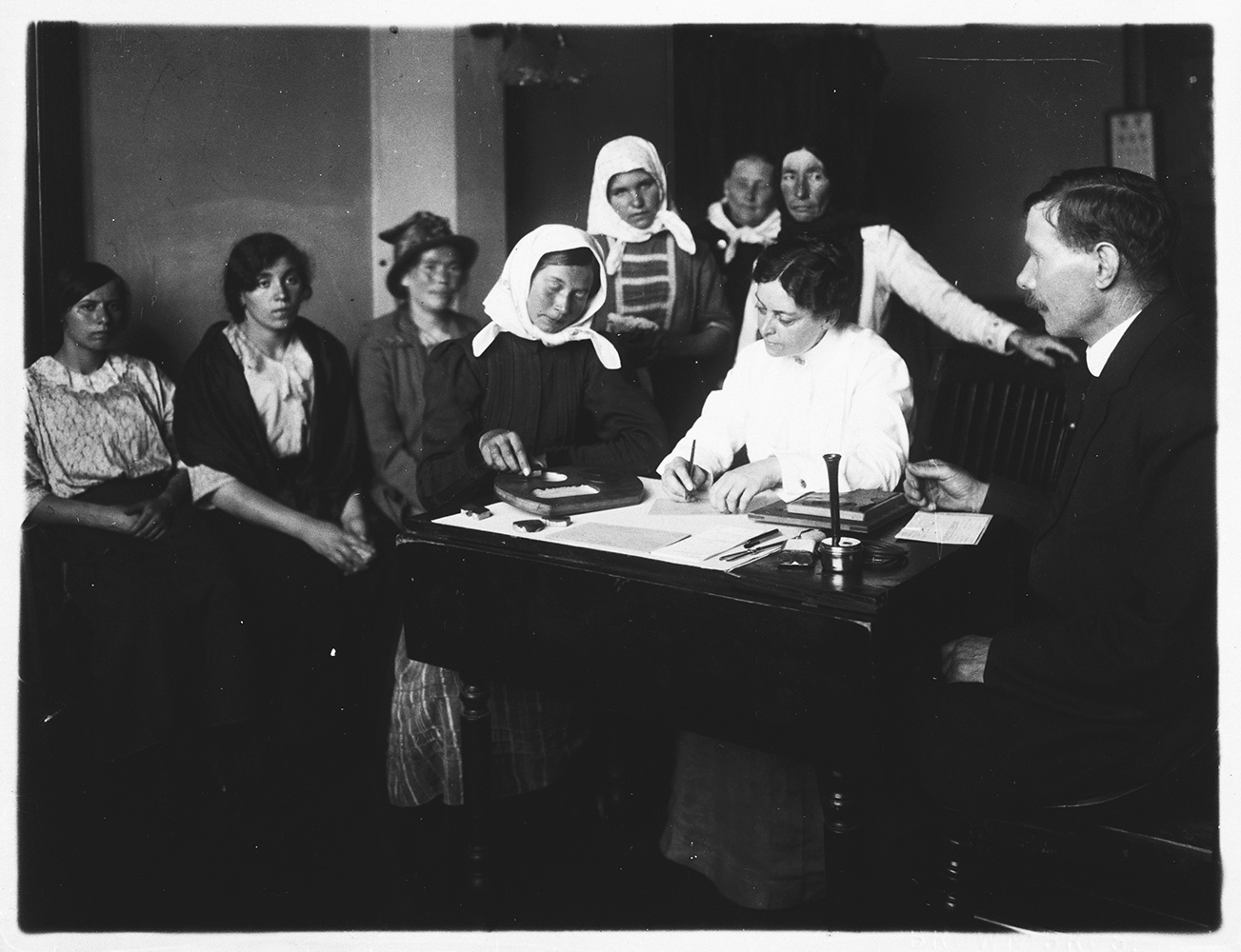 Mali Kaltman's life was about to dramatically change, presumably for the better, on September 15, 1909, when she boarded the SS Friesland en route to Philadelphia. Mali's entry in the ship's manifest was unremarkable in most respects—Mali Kaltman, Female, Dressmaker, 19 years old, Hebrew—except for the barely legible scribble "SI" that preceded her name.

Further examination of her entry reveals a stamp indicating that she and another passenger were "Passed by Board of Special Inquiry."

The story presented here can only be told upon examination of the Records of the Special Boards of Inquiry for District 4 (Philadelphia) of the Immigration and Naturalization Service. This unique series goes beyond the typical genealogical information of age, occupation, and residence to reveal intimate details regarding the status and treatment of immigrants during their first days in a new land. To the genealogist, these records tell a story, rather than merely revealing personal statistics.

If the Friesland had landed at the port of New York, then Mali's story would have ended right here. Because she landed at Philadelphia, her story continues in the Records of the Immigration and Naturalization Service (Record Group 85). Although proceedings for Boards of Special Inquiry at most ports were destroyed, the proceedings from the port of Philadelphia, along with a variety of correspondence, reports, and ledgers, were retained and became part of the holdings of the National Archives at Philadelphia.

Prior to landing in the United States, an immigrant went through a brief interrogation by an immigration official. This process was not too onerous; the questions reiterated much of the information already given on the passenger manifest. In addition, the passenger underwent a medical examination to determine if the immigrant had any contagious diseases or physical maladies that might affect his or her ability to be financially independent. Any passenger whom the inspector deemed unfit to enter was detained and ordered to appear before the Board of Special Inquiry.

The boards' authority stems from an act of May 6, 1882 (22 Stat. 58), which required officials at immigration stations to verify the identities of Chinese immigrants eligible for exclusion. An ensuing act in March 1891 (26 Stat. 1084) empowered officials to inspect all incoming passengers to identify convicts, lunatics, or persons they deemed unable to take care of themselves and likely to become a public charge. Later acts enlarged the list of excludable immigrants to include polygamists, anarchists, the feeble minded, unaccompanied children under 16 years of age, persons having tuberculosis, and persons suffering from physical or mental defects.

The boards were made up of three individuals appointed by the station’s commissioner of immigration and operated in a fashion similar to a trial court in which witnesses were called and evidence presented. A secretary acted as stenographer and recorded the proceedings verbatim. At the port of Philadelphia, decisions of the Board of Special Inquiry were retained for the years 1893–1909 and comprise 54 bound volumes, all of which have been microfilmed as National Archives Microfilm Publication M1500 and digitized by Ancestry.com. 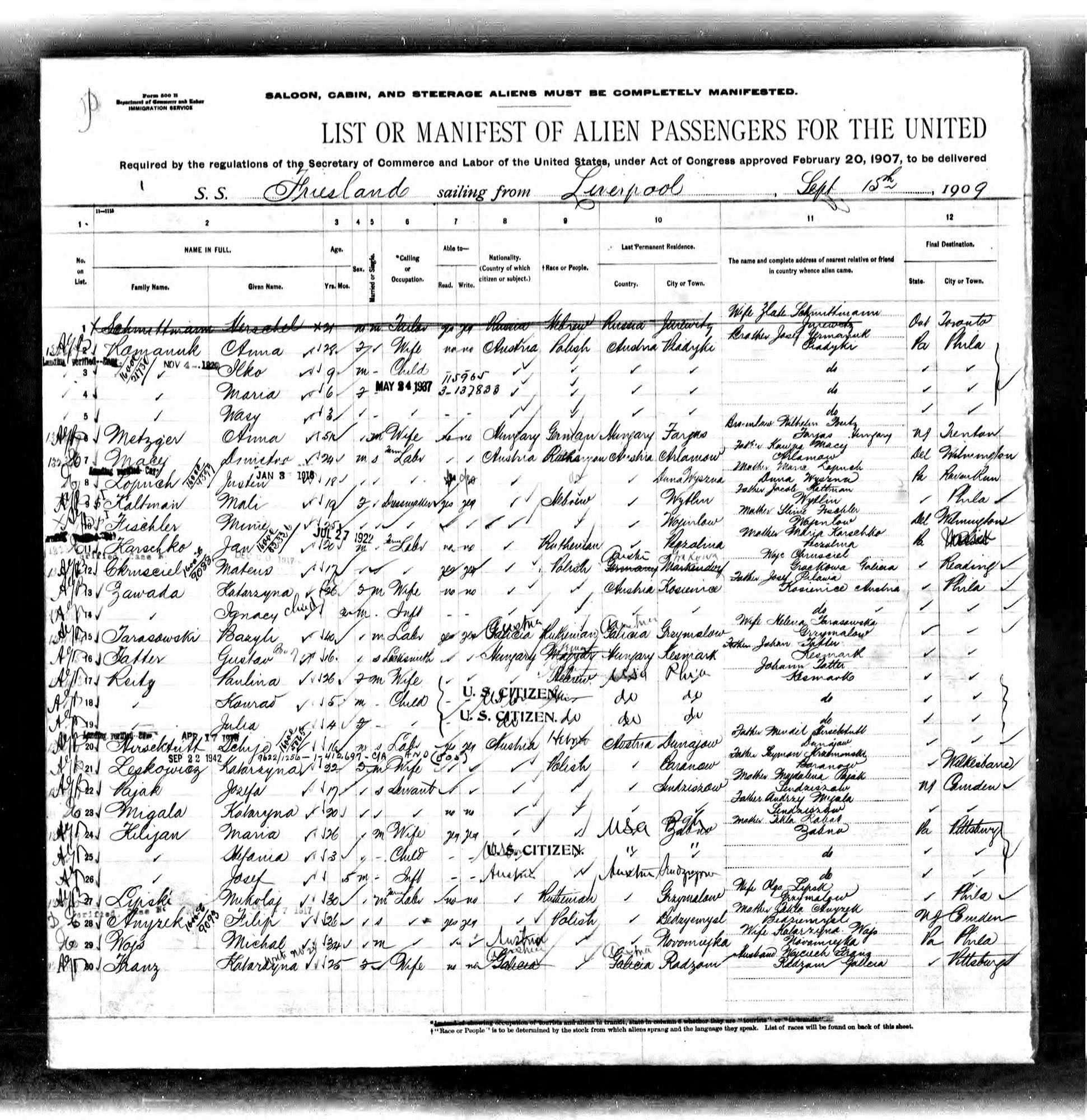 Mali Kaltman's name and information appear on line 9 of the SS Friesland's passenger arrival manifest. (Records of the Immigration and Naturalization Service, RG 85) 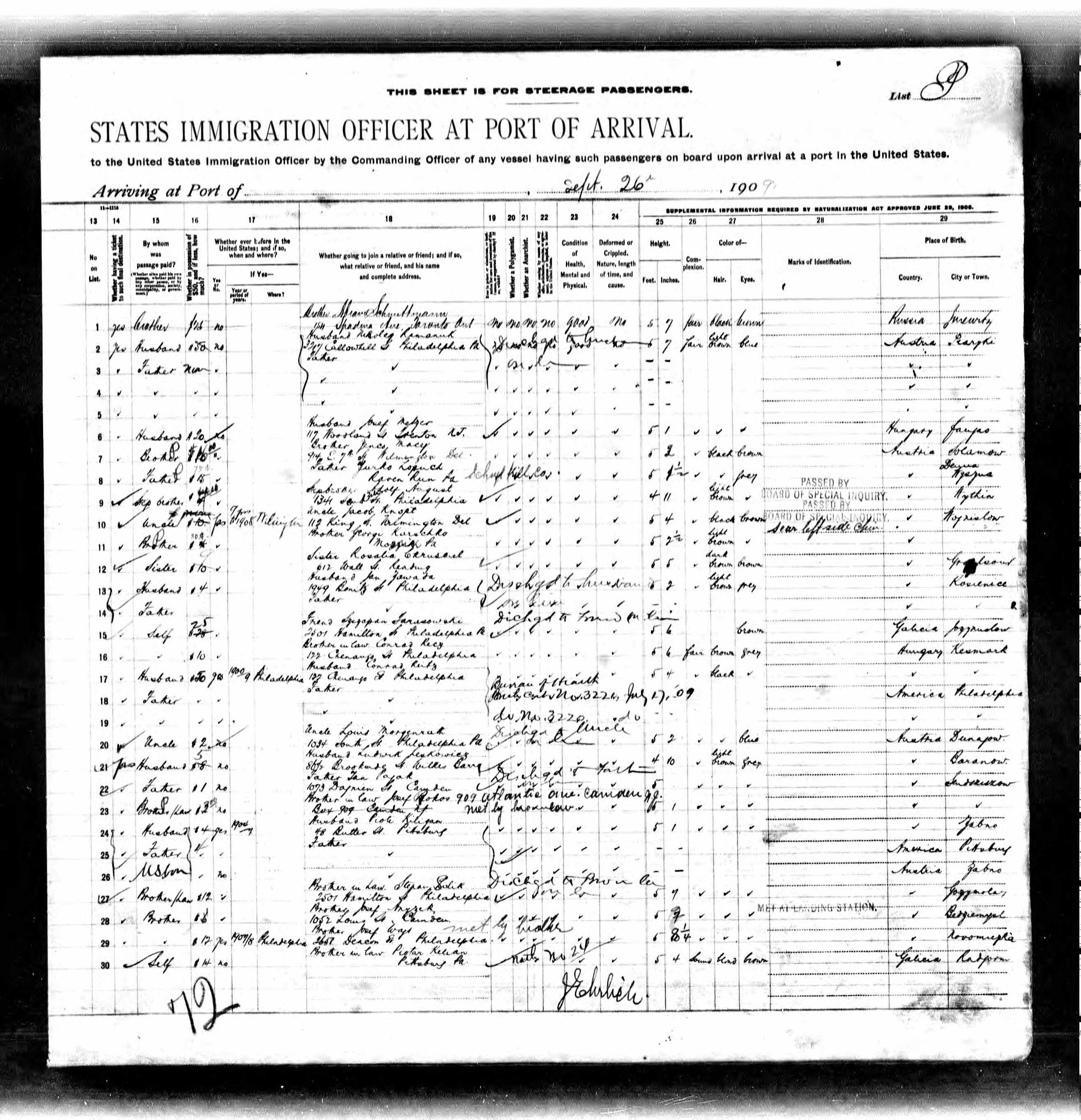 The notation passed by Board of Special Inquiry was stamped at the end of Kaltman's entry on the manifest. (Records of the Immigration and Naturalization Service, RG 85)

The early records merely contain a narrative report of the proceedings, while records dated after 1905 contain a verbatim description of each hearing. In some cases, you may find ancillary evidence such as telegrams, health certificates, and detention cards. The proceedings are arranged chronologically by the date of the hearing and have been indexed by volunteer staff at the National Archives at Philadelphia. The reports include the name of the ship, date of arrival, and a personal description of the detained immigrant. Some reports include statistical information showing the number of first-class or steerage detainees, the number of passengers being held in the hospital, a list of the nationalities of the individuals on board, and the names of interpreters used in the hearings. Some proceedings also include lists of individuals who were being detained until they could be met by a relative or received money to allow them to continue their journeys. A description of the individual who claimed the passenger would also be included.

Mali Kaltman met her inquisitors at a hearing on September 26, 1909. The record of the day does not indicate the reason for her detention, but one can presume that inspectors believed that an unaccompanied 19-year-old woman entering the country was cause for alarm.

Mali's proceeding commenced with the board members asking her name, age, whether she was married or single, and her occupation. This stage of the inquiry typically involved verifying the information given on the passenger manifest. But soon, the questioning changed gear to reveal other details of Mali's life:

Q (board). Have you any brothers besides this one?
A (Kaltman). Yes; three brothers and two sisters in Europe.
Q. What are the names of your brothers?
A. Shimi, Moses and Leib Kaltman.
Q. What are the sisters' names?
A. Lisa and Biele Kaltman.

Routine to be sure, but to the genealogist these are exceptional details about individuals who may not have ever traveled to the United States and otherwise could have remained unknown. As the proceeding continues, we learn that Mali's nearest relative or friend in the United States was her step-brother, Adolf August. Mali informs the board that August lives at 1341 South Street in Philadelphia and is married.

Because the board was responsible for verifying that the detained immigrant's story was indeed true, it rarely relied solely on the subject's testimony. The board therefore called Adolf August to testify. August informed the members of the board that he was a baker in another's employ and that he lived in the bakery. Interestingly enough, he informed the members that he was not married, despite the answer given previously by his step-sister.

At this point, the board became quite interested in the nature of the relationship between Kaltman and August. It was revealed that the two were not blood relatives, but their parents had married after being widowed. Out of nowhere, August was asked whether or not he planned on marrying the girl. He replied, "maybe; I don’t know for sure." The proceeding continued:

Q (board). Would you be willing to marry a girl you had never seen?
A (August). Why not? They wrote me from home she is a decent, respectable girl; why wouldn't I?
. . .
Q. Do you want to marry this girl now?
A. I can't say. I have nothing and she has nothing.

Kaltman's intentions were certainly more pronounced than those expressed by August. When asked whether she wished to be married, Mali said, "Yes; he is a very nice young man. He doesn't play cards, he is an awful nice young man, and for that reason I am willing to marry him. The first time he saw me on the street he fell in love with me, and then he went to my parents in a couple of days and they made an arrangement, an engagement, and then when he went away, as soon as he came here he sent for me right away." 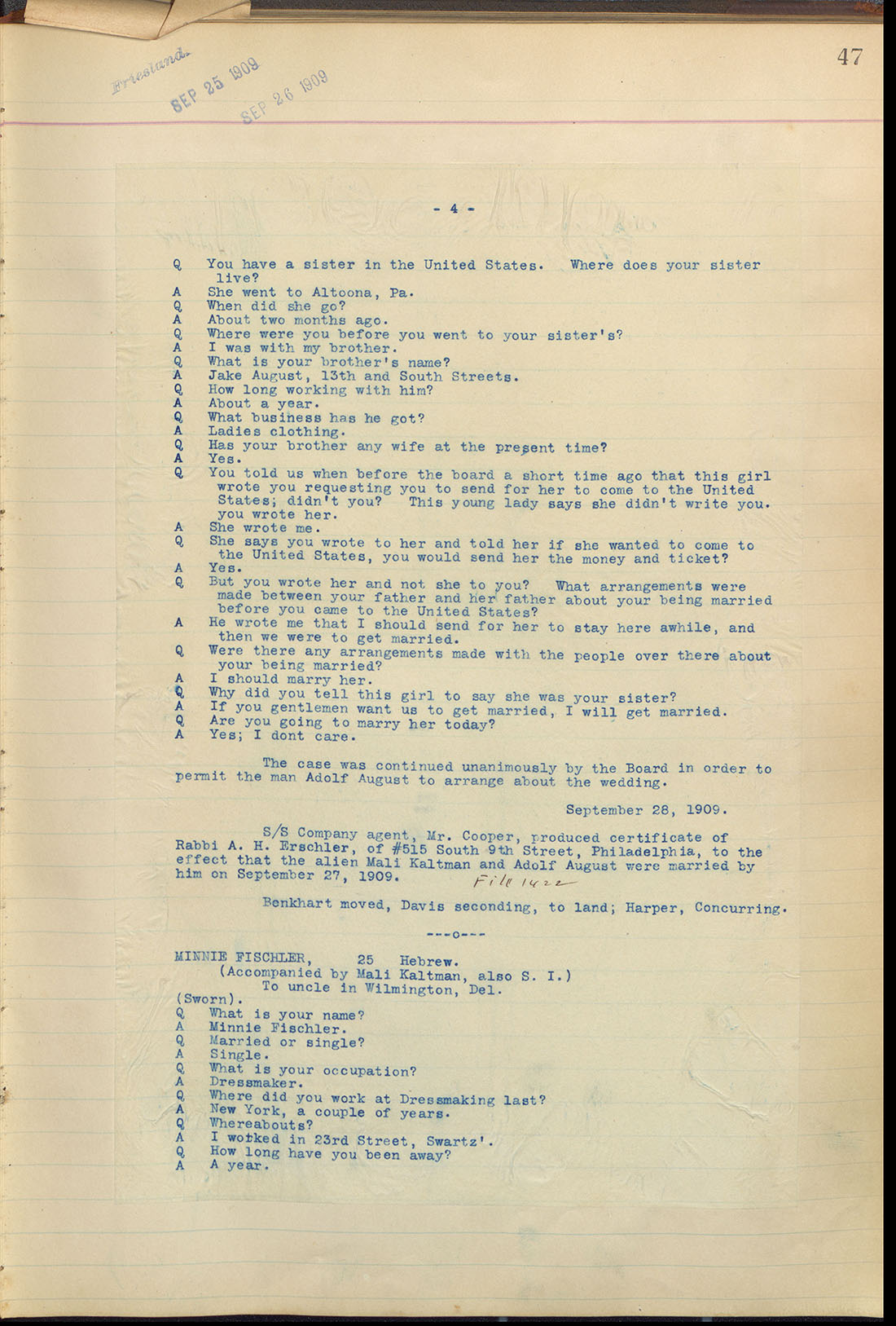 Enlarge
After Adolf August s perfunctory agreement to marry Kaltman, the board adjourned in order to allow time the the wedding, which took place a day later. (Records of the Immigration and Naturalization Service, RG 85)

The board now seemed to dwell on August's intentions, questioning both Mali and him about who initiated her travel to America. The proceedings read more like a soap opera than government inquiry, with August now questioning the board as to whether they wished for the two to be married and that if the board wanted this to happen, he didn't care.

Mali and Adolph Are Married, Then Disappear from Census

Under normal circumstances, the board would render its decision at the conclusion of a hearing. In the case of Mali Kaltman, the board deferred to "permit the man Adolf August to arrange about the wedding." Sure enough, the board reconvened on September 28 and received evidence provided by Rabbi A. H. Erschler that they had been married by him on the 27th. The board members voted unanimously to allow the immigrant to land.

Presumably, Mali and Adolph spent the ensuing years in each other's company; however, their trail goes cold as early as the taking of the 1910 decennial census. A search of that year's index reveals neither individual, despite the mountain of evidence that had been recorded merely months before. Could they have moved west? Perhaps they traveled abroad or were simply missed by the enumerator. Succeeding census results from 1920, 1930, and 1940, however, fail to show the couple together.

What became of Mali and Adolph?

Without any other clues, luck takes over. Volunteers at the National Archives at Philadelphia spent a good deal of time indexing records of the Immigration and Naturalization Service such as Letters and Telegrams Received Concerning the Status and Treatment of Aliens, Letters Sent to the Port of Philadelphia, and Letters and Telegrams Received Concerning Admission of Aliens. While indexing the series Outgoing Passenger Manifests, longtime National Archives volunteer Jean Korn came across a very familiar name—Mali August (alias Kaltman). 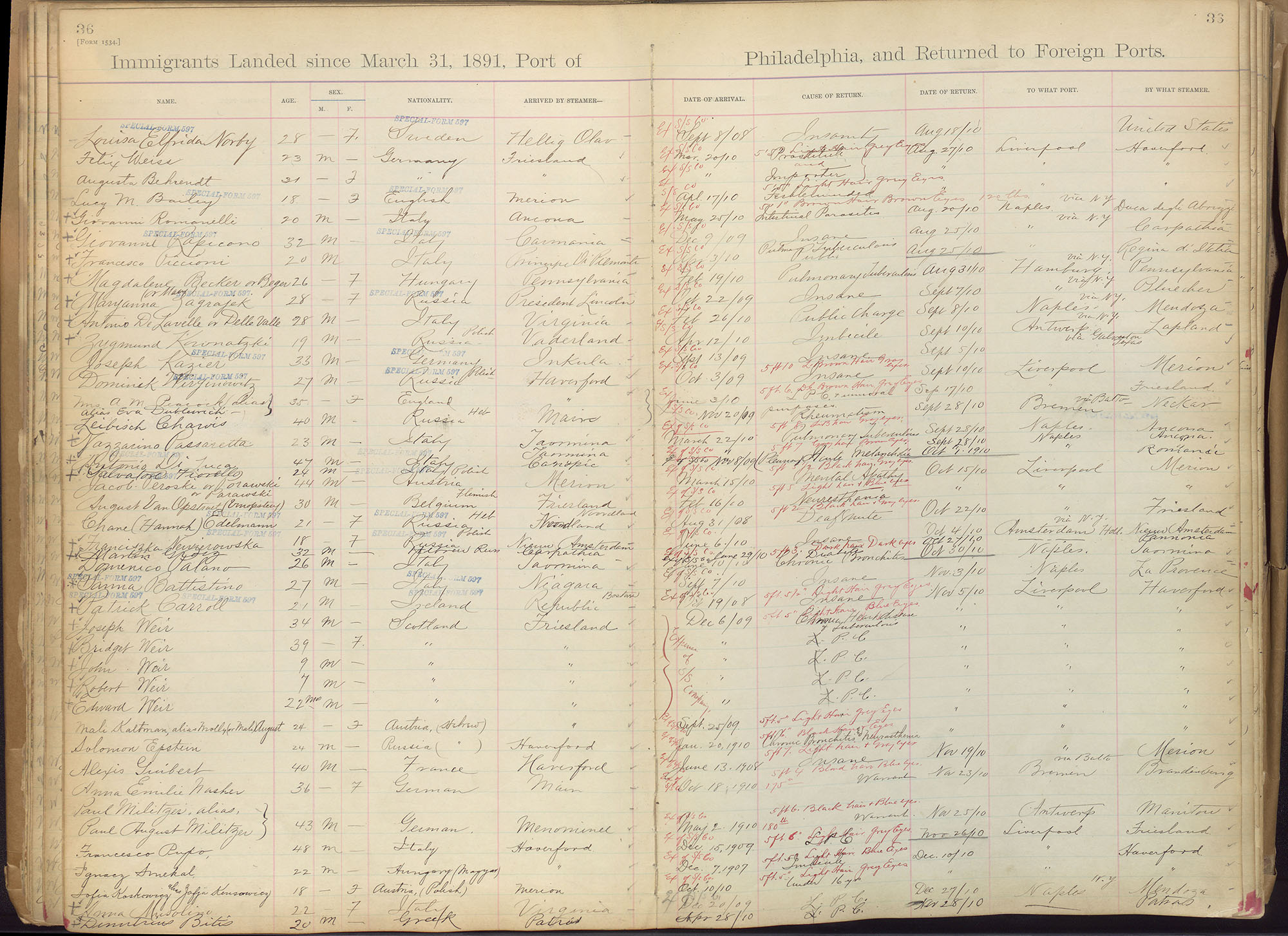 Enlarge
This register shows that Kaltman was not returning to Europe on her own accord but was being deported by immigration authorities on account of her being likely to become a public charge. (Records of the Immigration and Naturalization Service, RG 85)

Mali was listed as a passenger on board the SS Haverford bound from Philadelphia to Liverpool on November 5, 1910, just over a year after her original arrival in the United States. The manifest indicated that she was being deported by the U.S. Commissioner (of Immigration) but did not give the reason why. Section 11 of the 1891 Immigration Act provides:

Could Mali have become a public charge? Unfortunately, the manifest does not reveal any other information, nor do the several series of letters relating to aliens. However, the Registers of Immigrants Debarred and Returned to Foreign Ports, 1891–1917, does fill in the story. These registers are arranged by date of return and include a description of the alien, the date of his or her initial arrival into the United States, the name of the vessel on which he or she will be returning, the date of return, and the reason for deportation or debarment. Mali was found among passengers being returned on the Haverford. Her cause for deportation was listed as "L.P.C."—likely to become a public charge.

No other evidence of Mali's story was uncovered in INS records. The name of Adolph August, however, was conspicuously missing from the 1910 manifest and deportation list. The Board of Special Inquiry went to great pains to determine if the pair would be married and, more importantly, that Mali Kaldman would not be a drain on society. Whether through August's death or desertion, Mali was left to fend for herself against the ills from which immigration officials attempted to shield her.

The Records of the Special Boards of Inquiry should not be overlooked by genealogists wishing to place their ancestors within the historical context of the United States' immigration boom (1880–1920). While not all researchers will find their ancestors among these files, most will find value in the description of the milieu most immigrants encountered upon arrival. If you are one of the lucky ones, you should expect to find rich details about your ancestor's journey on the road to becoming American.