Milton Claiborne Nicholas and the Legacy of the First Black Voters

One cannot begin to imagine the trepidation with which Milton Claiborne Nicholas approached the polls for the very first time.

The illiterate rural farm laborer faced significant challenges as a first-time voter in the November 8, 1870, elections in Goochland County, Virginia.

The challenges were daunting: How would he be sure that he had voted for the actual candidates of his choice? After all, the votes were cast in writing and he could not read. He would undoubtedly need the assistance of someone he could trust in order to exercise his newfound right to vote—a vulnerability that left him, and many others like him, open to potential political exploitation. 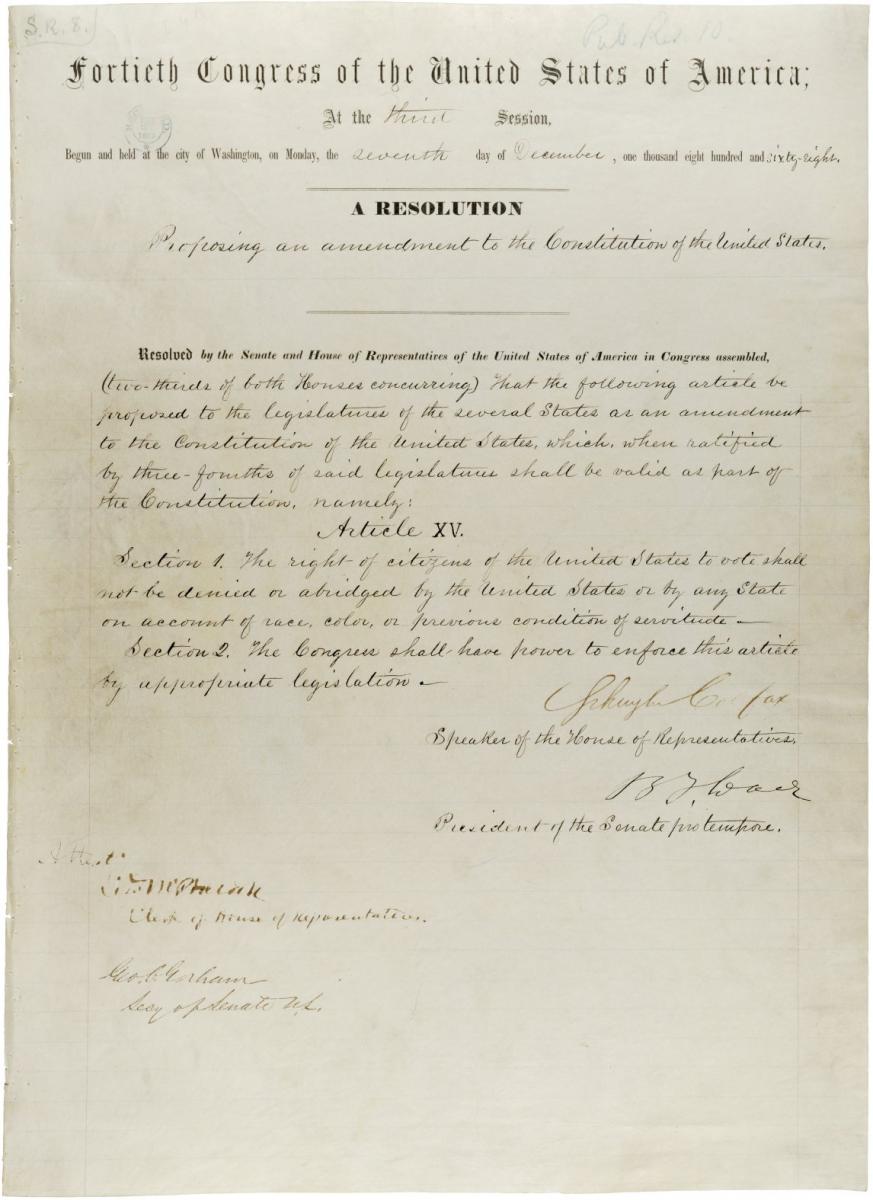 With this document, Congress sent the 15th Amendment to the states in December 1868 for ratification. (RG 11, General Records of the U.S. Government, National Archives Identifierr 299797)

The ratification of the 15th Amendment to the U.S. Constitution had just recently granted African American males, like Nicholas, the right to vote by declaring the “right of citizens of the United States to vote shall not be denied or abridged by the United States or by any state on account of race, color, or previous condition of servitude.”

Passed by the House of Representatives on February 25, 1869, then by the Senate the following day, the amendment was not actually ratified by the necessary three-fourths of the states until February 3, 1870.1 This was, without a doubt, a seminal step on the road toward universal suffrage, and yet the ultimate goal of this amendment would continue to face strong, organized opposition throughout the next century. Not until the Voting Rights Act of 1965 would racial minorities in the United States see an effective and functional piece of legislation in place aimed at protecting their voting rights with practical, enforceable standards.

Recently enfranchised courtesy of the 15th Amendment, Nicholas had no such practical legal recourse when he went to cast his vote for the first time. The ballot listed two parties: the Republican (or Radical) party, which presented those candidates most politically sympathetic to freedmen and the policies of the late President Abraham Lincoln, and the Conservative party, whose candidates were most philosophically opposed to Reconstruction efforts.

For Milton Nicholas, the practical hurdle of illiteracy was exploited by election officials in order to manipulate his vote to fill the local post of sheriff. We know this because Mr. Nicholas made the bold decision to bring his complaint officially before the Commissioners Court of the Eastern District of Virginia in Richmond, leaving behind a trail of records to tell his story.

In his own testimony drawn from the case file, Nicholas recounts the events of November 8:

When I went in at the door, Mr. Foster asked me to let him see my ticket. I let him take it in his hand—Foster told me I was ignorant [and] did not know what I was talking [sic] [H]e had been trying to persuade me how to vote[.] Foster then handed my ticket to the clerk and told the clerk to take off Mr. Parsons name and put on Mr. Vaughns name[.] Parsons was the Republican Candidate for sheriff[.] I said[, “] Mr. Foster please don’t alter the ticket I want to vote the full Radical ticket[;] let it go straight just as it is[.”] The clerk changed the ticket[.] I then reached for the ticket but he would not hand it to me—but gave it to Jno. Strong one of the Judges [and] told him to put it in the box—[and] the ticket was put in—I never had possession of any ticket after it was changed—I am 31 years old [and] I live in Gouchland [sic] county all my live [sic] [and] was registered in the precinct when I offered to vote[.] If I had gotten possession of the ticket after it was changed I would not have voted it[.]2

Testifying contrary to Milton Nicholas’s account was, among others, one Frank Breathed, shown in the 1870 census as the overseer of the farm where Milton Nicholas was most likely employed.3 Breathed’s testimony, on behalf of the defendants Foster and Strong, presents an interpretation of events that is almost diametrically opposed in intention to that of the complainant:

When he Nicholas came in he asked Foster who he should get to change the ticket[.] Foster replied that any of these gentleman [sic] would do [and] Nicholas handed the ticket to the clerk—Hogens changed the name of Parsons to Vaughn [and] handed it back to Nicholas [and] Nicholas handed it [to] Strong one of the Judges[.] In conversation with me Nicholas told me he would have voted the entire Conservative ticket if he had not been afraid.4

While weighing in on behalf of the defendants, and facing Nicholas in open court to refute his official statement, Breathed was also, de facto, representing Nicholas’s probable employer (and Frank’s father) John W. Breathed. This raised the personal stakes for Nicholas. However the case was decided, by putting himself in public opposition to his employer, he risked losing his livelihood in addition to facing negative social consequences in the community. 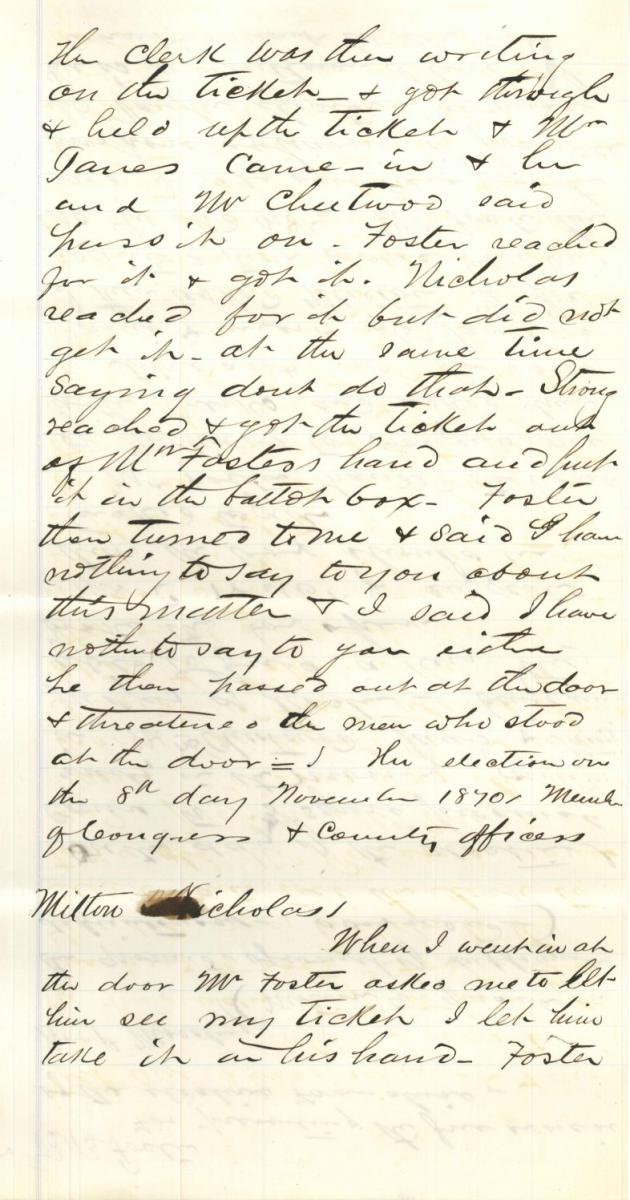 Testimony of Milton Nicholas from the lawsuit he brought charging election officials with intimidation. (RG 21, Records of District Courts of the United States, National Archives at Philadelphia) 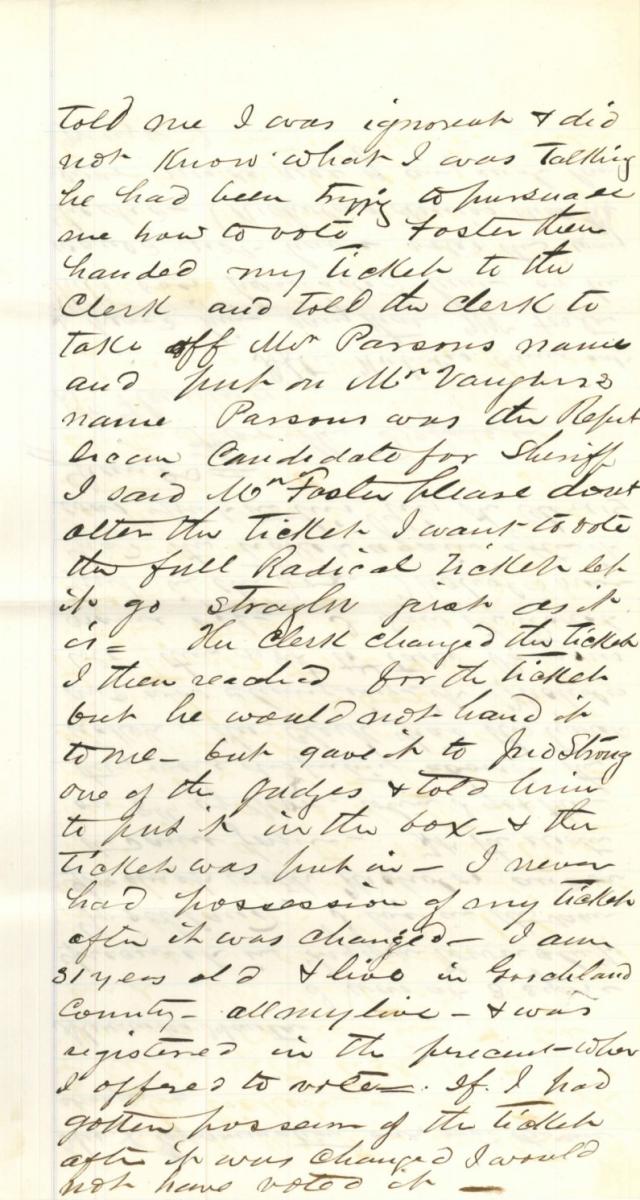 Newspapers Reach Out to the Court of Public Opinion

Just as today, the courtroom was not the only place where relevant social topics were deliberated, conclusions drawn, and opinions rendered. As with any contentious issue, public opinion would also have its say. The story was quickly picked up by the newspapers. The Alexandria Gazette of December 3, 1870, reported:

Another Persecution Case—For two days past Commissioner Jenkins has had another of those horrible persecution cases before him. It appears that Messrs. Strong and R. Foster, respected citizens of Goochland, were hauled up before the Commissioner upon a warrant obtained by W. B. Moseley [sic], the colored Senator, for intimidating a colored voter named Milton Nicholas. . . . Not one particle of evidence was elicited to prove that any force, violence, threats or even persuasion had been used . . . and the Commissioner, after a careful examination, decided to dismiss the case, and the parties thus persecuted by a dirty set of unprincipled vagabonds, were allowed to go their ways without further molestation.5

As dismissive and condescending as this report may be, it provides a valuable window into the social context of the lawsuit. The prevailing social disdain against black voters of Virginia is plainly evident in the choice of language. Interestingly, the reporter seems to lay responsibility for the charges not on Milton Nicholas but on a man named Mosely.

William P. Mosely, was born into slavery in Virginia around 1819. After obtaining his freedom, he sought an education and later became an active, elected political figure in the 1860s and 1870s.6

In the case against Strong and Foster, Mosely testified, on behalf of Nicholas, that he was engaged in registering black voters and distributing ballots in Goochland County when he witnessed the scene concerning the altered ballot.7 His education, political acumen, and social standing enabled him to withstand social pressure in ways that were simply not available to Nicholas and his family. 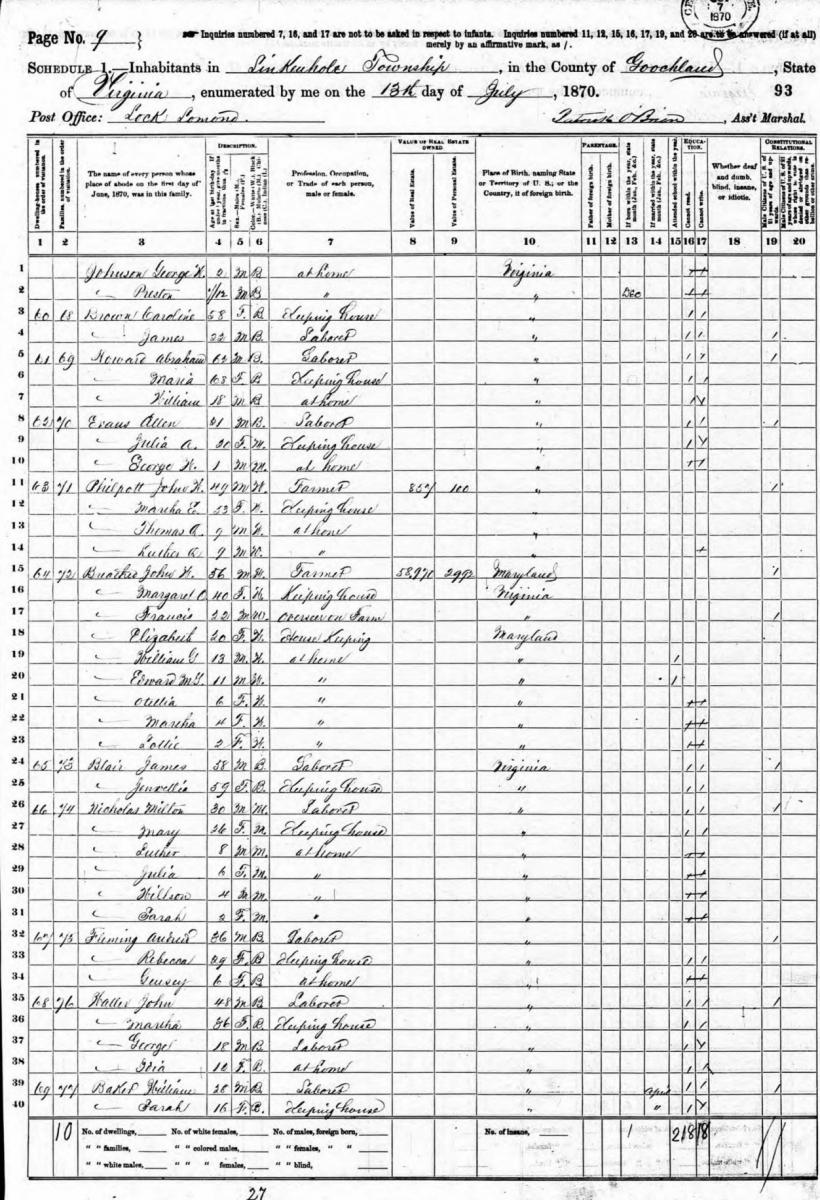 The 1870 census identifies Milton Nicholas as a laborer and lists his wife and four children. (RG 21, Records of the Bureau of the Census)

Freedmen’s Bureau records record the marriage of Milton Nicholas to Mary Fontaine (or Fountain) in Goochland County Virginia in 1866.8 The birth dates of their children suggest that the couple had been in a committed relationship for some time previously. In November 1870, when the 31-year-old Milton Nicholas cast his disputed ballot, the family consisted of 26-year-old Mary, 8-year-old Martin Luther, 6-year-old Mary Juliet, 4-year-old William James, and 2-year-old Sarah.

After his case was dismissed, Richmond city directories show that Nicholas took new employment in the city. Beginning in 1871, he spent his remaining years driving a hackney cab.9 According to Virginia deaths and burials index, Milton Nicholas died in Richmond on January 30, 1888.10

Working first as a clerk, Martin Luther Nicholas was practicing law as a full-fledged professional by 1898, according to the Philadelphia City Directory.13 By 1900, the surviving Nicholas siblings and their families had relocated to Philadelphia to join their mother and eldest brother. Census records for 1900 show that Mary Nicholas was now the matriarch of a family of 12 (plus one boarder) residing under a single roof at 1212 Christian Street, a historically black neighborhood of the city.14

The children of Milton and Mary Nicholas and their families continued to live in Philadelphia. Mary Nicholas’s last appearance in a census record came in 1930, at the age of 86, in the household of her grandson Martin Williams, the son of Mary Juliet and her husband Anthony.15 Her longest surviving child, William James Nicholas, died on June 1, 1960, at age 94, just five years before the passage of the Voting Rights Act of 1965 would reaffirm and strengthen the right his father first championed in 1870.16

Knowing the specific narrative that led to the family’s urbanization gives us both a deeper understanding of the early childhood experiences of the Nicholas siblings and some insight into what may have driven Martin Luther’s choice of career, schools, and ultimately, a new home for the entire family. However weighty the phrase “a century of progress” sounds, this is a story that played out in a span of just two generations. Milton Nicholas and his fellow pioneers who first tested America’s resolve to achieve racial equality at the ballot box could little imagine the political landscape their grandchildren would inhabit.

Moving beyond the federal census records can add richness and depth to your family history research. Several different records were instrumental in reconstructing the history of the Nicholas family. The Freedmen’s Bureau records can provide an early written source for recording African American marriages. City directories can provide a year-by-year indication of both residence and occupation. Knowing a neighborhood where an ancestor has resided at a specific time can offer additional possible clues. A neighborhood’s proximity to houses of worship could indicate a source for seeking baptismal records when aligned with a child’s birth date, or a potential burial place when aligned with a family member’s known death date.

In the case of Milton Nicholas, without the crucial court records to preserve the story of his public stand for suffrage, the migration of the Nicholas family might be interpreted through a more generic historical lens, and the powerful bravery of his choices remain obscured. Nor would the account of events in his own words be discoverable by his descendants more than 140 years after he spoke them. By using an array of records it is possible to build a richer, more complete picture of a family’s history together with each other, within their local community, and even as a voice on the national stage.

1. For more information, view the primary sources at these links: www.loc.gov/rr/program/bib/ourdocs/15thamendment.html and https://memory.loc.gov/cgi-bin/ampage?collId=llsl&fileName=015/llsl015.db&recNum=379 Last accessed 2/3/2016.