The travels of the Declaration of Independence and the Constitution have been chronicled frequently over the years—in fact, they are fascinating stories. However, the third “Charter of Freedom”—the Bill of Rights—has been largely overlooked.

As we celebrate the 225th anniversary of the document’s ratification, let’s explore its history. A parchment document with 12 proposed constitutional amendments was created in September 1789, and copies were sent to the states for ratification.

By December 15, 1791, enough states had ratified amendments 3 through 12 to make them law. These became what we now call the Bill of Rights. By 1992, the original second amendment, limiting congressional pay, garnered enough state ratifications to become the 27th Amendment. 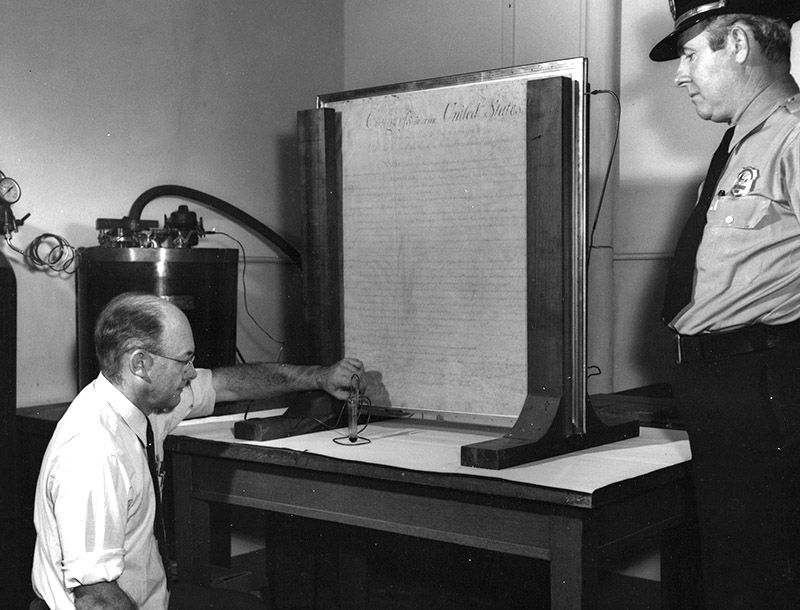 Before the National Archives was established, the Department of State safeguarded the federal government’s official records. Unlike the Declaration, which had been on display, the Bill of Rights remained in storage.

When the State Department moved with the rest of the government from New York to Philadelphia, the Bill of Rights went too. In 1800 it came to the new capital, Washington, D.C., and was removed to Leesburg, Virginia, only briefly in 1814 when the British burned the city.

Throughout the 19th century, the document was stored in various State Department offices and eventually made its way to the Old Executive Office Building. There, it was sewn into a large binder with other ratified amendments.

Conservators removed the document from its binder and put it on display in the Rotunda—you can still see the holes from the sewing.

In 1947—the first time in 133 years—the Bill of Rights left Washington as part of the Freedom Train exhibit that traveled across the country.

On November 22, 1952, the document was sealed in a helium-filled glass case and, on December 15 (Bill of Rights Day), put on permanent display with the Declaration and the Constitution, which had been transferred to the National Archives from the Library of Congress just two days before.