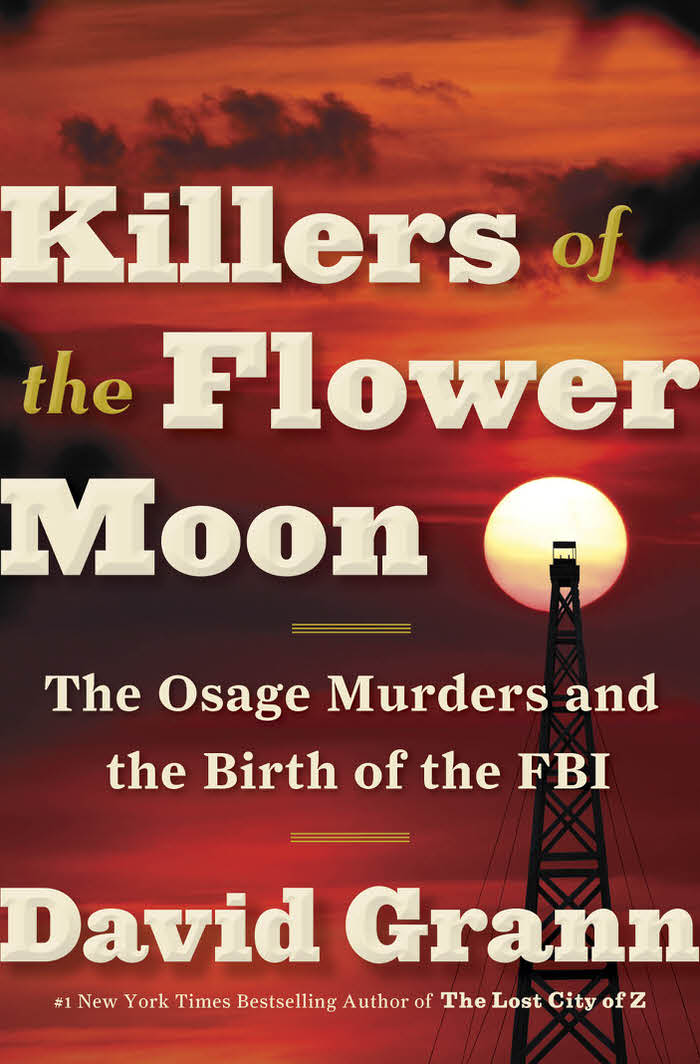 In his new book Killers of the Flower Moon: The Osage Murders and the Birth of the FBI, David Grann tells the riveting story of the murders of the world’s richest people per capita in the 1920s. Oil had been discovered in the Osage Indian nation in Oklahoma, but with that boon came a terrible series of deadly crimes. When the death toll reached two dozen, the relatively new Federal Bureau of Investigation was called in, and the mystery began to unravel. The conspiracy at its heart is quite simply one of the most monstrous crimes in American history.

David Grann is a staff writer at The New Yorker and the #1 New York Times bestselling author of The Lost City of Z. Translated into 25 languages and named a best book of 2009, it has been adapted into a major motion picture. His book The Devil and Sherlock Holmes contains many of his New Yorker stories. A graduate of Connecticut College, he holds several degrees and was a senior editor at The New Republic and executive editor at The Hill. He lives in New York with his wife and two children.

What led you to the story of the Osage murders?

One day when I visited the Osage nation museum, in 2012, I saw a panoramic photograph on the wall. Taken in 1924, it showed a seemingly innocent pageant of members of the tribe and white settlers. But the photo had a section missing—it had been cut out. When I asked the museum director why, she said because it contained the image of a figure so frightening that she’d decided to remove that piece of the picture. She then pointed to the missing panel and said, “The Devil was standing right there.” Later, she went down into the basement and brought up an image of the missing panel, which showed one of the masterminds behind the killings of the Osage for their oil wealth, during the early 20th century. The book grew out of trying to understand who that figure was and the anguishing history he embodied. And it led me to one of the most mysterious and sinister crimes in American history.

Your book is structured around three stories: Mollie Burkhart, her family, and the Osage and the white townspeople; Tom White and the FBI; and your journey, years after the fact, and what you uncovered. What were the reasons behind that narrative strategy?

I thought it was important to begin with the perspective of Mollie, who is at the center of the story and who was a remarkable woman. Born in 1886, she grew up in a lodge, speaking Osage and practicing Osage traditions, and then within a few decades, because of the oil money, she is living in a large home with servants and married to a white settler who had been her chauffeur. In many ways, she straddled not only two centuries but two civilization. Then, one by one, her family begins to be murdered. There is a poisoning, shooting, and even a bombing. At great peril to her own life, she crusaded for justice. I didn’t think you could understand these events without her perspective.

Tom White is also someone who reflects the transformation of the country. He was born in a log cabin on the Texas frontier and became a lawman when justice was often meted out by the barrel of the gun. By the 1920s, when he is assigned to lead the investigation into the Osage murders, he has to wear a suit and file paperwork, which he can’t stand, and adopt modern scientific techniques, such as fingerprinting and handwriting analysis. He puts together an undercover team, and because of him at least some of the killers are caught. And so he provides another essential perspective on these events.

Finally, in the third section of the book, I try to show what has happened to the Osage today. I interviewed many of the descendants of the murders and the victims, including Mollie’s granddaughter. She told me what it was like to grow up without aunts and cousins and gave me a sense of how this history still reverberates today.

One of the reasons I decided to structure the book this way, telling the story from three distinct vantage points, was to hopefully illuminate how hard it is to discern history as it is unfolding, especially when the perpetrators are trying to cover up what really happened. Only with time does more of the whole picture emerge. In the third chronicle, I document—based on a great deal of new information—that though the FBI caught several of the killers, there was a deeper and darker conspiracy that it never exposed.

What were your most surprising finds in the extensive research you did at the National Archives?

I could not have written this book without the amazing holdings at the National Archives, where I spent hours upon hours researching this largely forgotten chapter in American history. There were so many surprising documents—accounts from the Osage that revealed the breadth of the killings; reports from private eyes who had investigated and, in some cases, covered up the crimes; and documents showing how a young J. Edgar Hoover handled his and the bureau’s first major homicide case. Often I would spend several days going through boxes, not finding anything relevant, and then open up a folder to discover something astonishing, like the secret grand jury testimony.

While the investigation into the conspiracy resulted in some sensational criminal convictions, the story reverberates in unsettling ways. What does this still mysterious episode say about American history?

The museum director had removed the photograph of the killer—the so-called Devil—not to forget what happened, but because the Osage can’t forget. And yet too many Americans, including myself, had either forgotten or never knew about this part of history—a history that is essential to understanding the formation of our country. I think this episode is a further reminder of much of our history is scattered in archives, crying out to be told.