The eighth Archivist of the United States, John W. Carlin was appointed by President William J. Clinton in 1995. He immediately began a comprehensive strategic planning effort that resulted in a 10-year plan to refocus the agency and bring it into the 21st century.

One of the major initiatives of NARA's Strategic Plan is the Electronic Records Archives (ERA), which aims to preserve and provide access to virtually any type of electronic record created anywhere in the Federal Government. This is an unprecedented effort involving partnerships with other Federal agencies and experts in the private sector to solve the problem of preserving the ever-increasing volumes of diverse, complex digital records that are being created worldwide. The entire Federal Government--indeed, today's "information society" at large--has a stake in ERA's success.

Mr. Carlin also obtained Federal funding for a much-needed and extensive renovation of the 70-year-old National Archives Building in Washington, DC, and for important conservation treatment on the treasured Charters of Freedom--the Declaration of Independence, the Constitution, and the Bill of Rights.

The National Archives Experience has the Charters of Freedom as its centerpiece, surrounded by the William G. McGowan Theater, the Lawrence F. O'Brien Gallery, the Boeing Learning Center, and the Public Vaults. The exhibition spaces of the Public Vaults convey the feeling of going into the stacks and vaults of the National Archives, where visitors can explore and celebrate the spirit of America through the great documents and great stories of our history.

In 2004, the Society of American Archivists honored Mr. Carlin for his "exemplary contributions to the archival profession," saying he had "served with distinction." And Government Computer News gave him its National Merit Award for Technology Excellence in Government, citing his "dedicated career in public service and commitment to advancing technology in Government."

Before becoming Archivist, Mr. Carlin had a distinguished career in public service, business, agriculture, and education. A native Kansan, he served in the state legislature for eight years and was Speaker of the House his last term. In 1978, he was elected Governor of Kansas and served two four-year terms. Following his political career, Mr. Carlin joined the faculty of Wichita State University in Wichita, KS, teaching graduate courses in public administration. He was Chief Executive Officer of Midwest Superconductivity in Lawrence, KS, when appointed Archivist of the United States.

Mr. Carlin resigned as Archivist effective February 15, 2005. As of early 2009, he is visiting professor and executive in residence in the School of Leadership Studies at Kansas State University in Manhattan, KS. 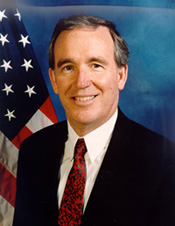