Featured Documents of the Month from NARA at Boston 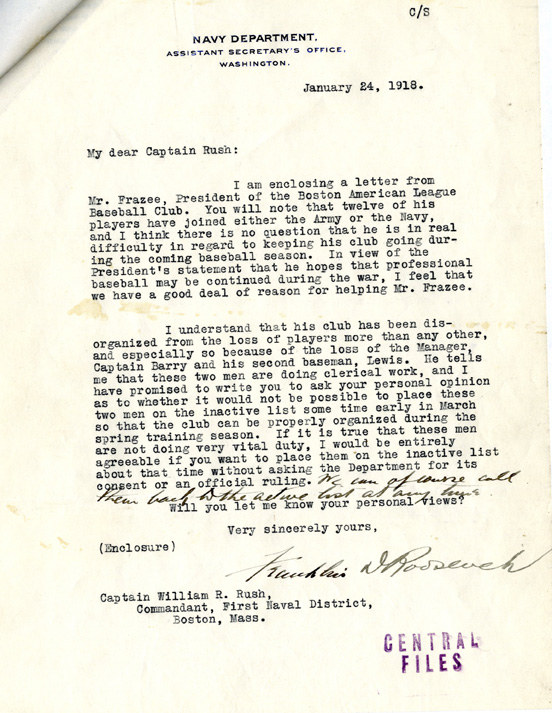 By the winter of 1917, with the nation at war, it was apparent to Red Sox owner Harry Frazee that his team was in trouble. Twelve of them had joined either the Army of the Navy, and he felt he'd have a hard time keeping the team going. He wrote to Captain William R. Rush, Commandant of the Boston Navy Yard, regarding detaching current Red Sox players from duty in the Naval Reserve. The Commandant would not release them. Frazee then proposed that the Red Sox would hold exhibition games, the proceeds from which would be donated to the Navy Relief Fund. The Captain was still not much impressed by this.

Subsequently, Frazee appealed to Assistant Secretary of the Navy Franklin D. Roosevelt in Washington and asked him to intervene. Roosevelt wrote to the Commandant on January 24, 1918, saying it sounded all right to him as the President had said that professional baseball should be continued during the war. He added a hand-written note that "We can of course call them back to the active list at any time." Captain Rush seems to have been offended that Frazee seemingly went over his head, and stated that he would withdraw "from further participation in this matter."

The press ran with the story that the players would be granted leave, which caused dismay at Navy headquarters in Washington, and anger at the Boston Navy Yard. The players themselves did not want to be relieved of duty because of the bad press that would likely ensue, and possible ill feeling from the public towards themselves.

On February 9, 1918, the Commandant issued a statement to the press stating that "There is no thought of granting leave or any special privileges, for the purpose of playing with the Red Sox or any other team." An examination of the 1918 Red Sox roster shows that none of these players returned that year, and the Red Sox won the 1918 World Series without them.