The U.S. government's efforts to assimilate American Indians into mainstream culture can be seen throughout the 20th century in the Bureau of Indian Affairs (BIA) activities. In 1953, the U.S. Congress established a new policy towards American Indians: termination. This policy eliminated much government support for Indian tribes and ended the protected trust status of all Indian-owned lands.

The Chicago Field Office Employment Assistance Case Files contain memorandums and progress reports, as well as promotional devices used to recruit Indians on reservations. To comply with privacy exemptions found in the Freedom of Information Act (FOIA) 5 U.S.C. 552, the names of individuals has been covered up for classroom use. The Chicago BIA Relocation Field Office created and distributed the suburban posters after the Chicagoland poster. 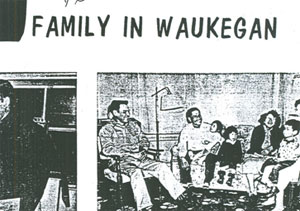 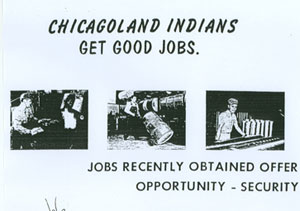 Encourage students to explore through National Archives records life on reservations and in major cities during the 1950s. Focus specifically on the tribes listed on the posters. What would motivate American Indians to leave their communities and move to a major city? What social issues were prevalent in cities, such as Chicago during the 1950s?

Write a letter in the voice of one of the members listed on either poster to relatives living on the reservation about experiences in Chicago.

Using other National Archives resources, chart the relationship the Federal government had with American Indians.