The Declaration of Independence: How Did it Happen?

In the early 1770s, more and more colonists became convinced that Parliament intended to take away their freedom. In fact, the Americans saw a pattern of increasing oppression and corruption happening all around the world. Parliament was determined to bring its unruly American subjects to heel. Britain began to prepare for war in early 1775. The first fighting broke out in April in Massachusetts. In August, the King declared the colonists “in a state of open and avowed rebellion.” For the first time, many colonists began to seriously consider cutting ties with Britain. The publication of Thomas Paine’s stirring pamphlet Common Sense in early 1776 lit a fire under this previously unthinkable idea. The movement for independence was now in full swing. 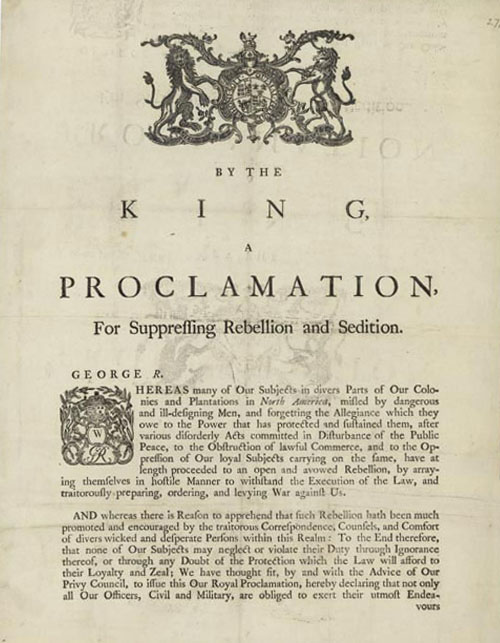 A Proclamation by the King for Supressing Rebellion and Sedition, August 23, 1775

National Archives, Records of the Continental and Confederation Congresses and the Constitutional Convention. 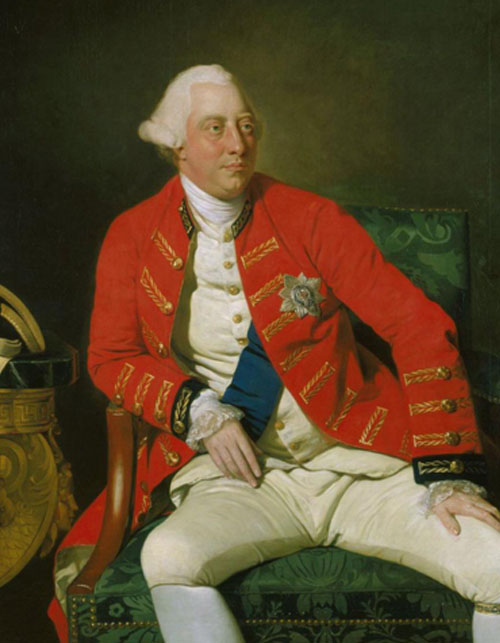 The official portrait of King George III by Johann Zofanny, 1771

Courtesy of the Royal Collection Trust

The colonists elected delegates to attend a Continental Congress that eventually became the governing body of the union during the Revolution. Its second meeting convened in Philadelphia in 1775. The delegates to Congress adopted strict rules of secrecy to protect the cause of American liberty and their own lives. In less than a year, most of the delegates abandoned hope of reconciliation with Britain.  On June 7, 1776, Richard Henry Lee introduced a resolution “that these united colonies are and of right ought to be free and independent states.” They appointed a Committee of Five to write an announcement explaining the reasons for independence. Thomas Jefferson, who chaired the committee and had established himself as a bold and talented political writer, wrote the first draft. 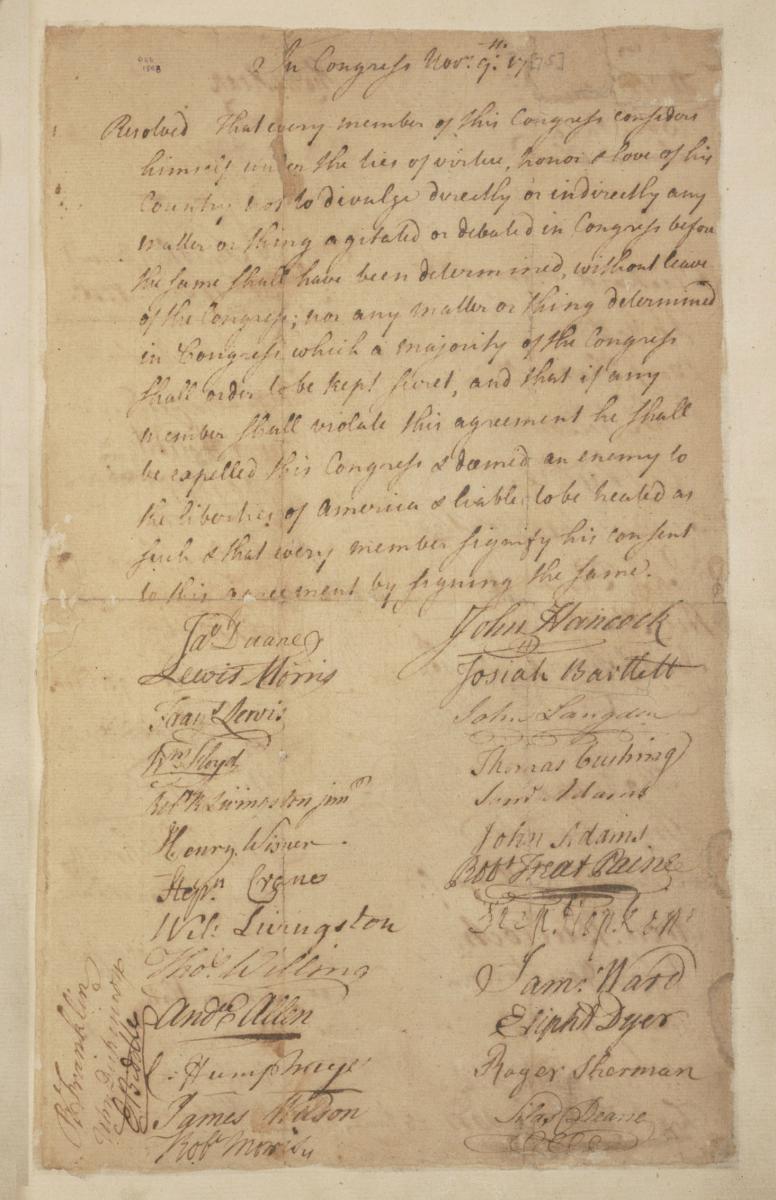 The Agreement of Secrecy 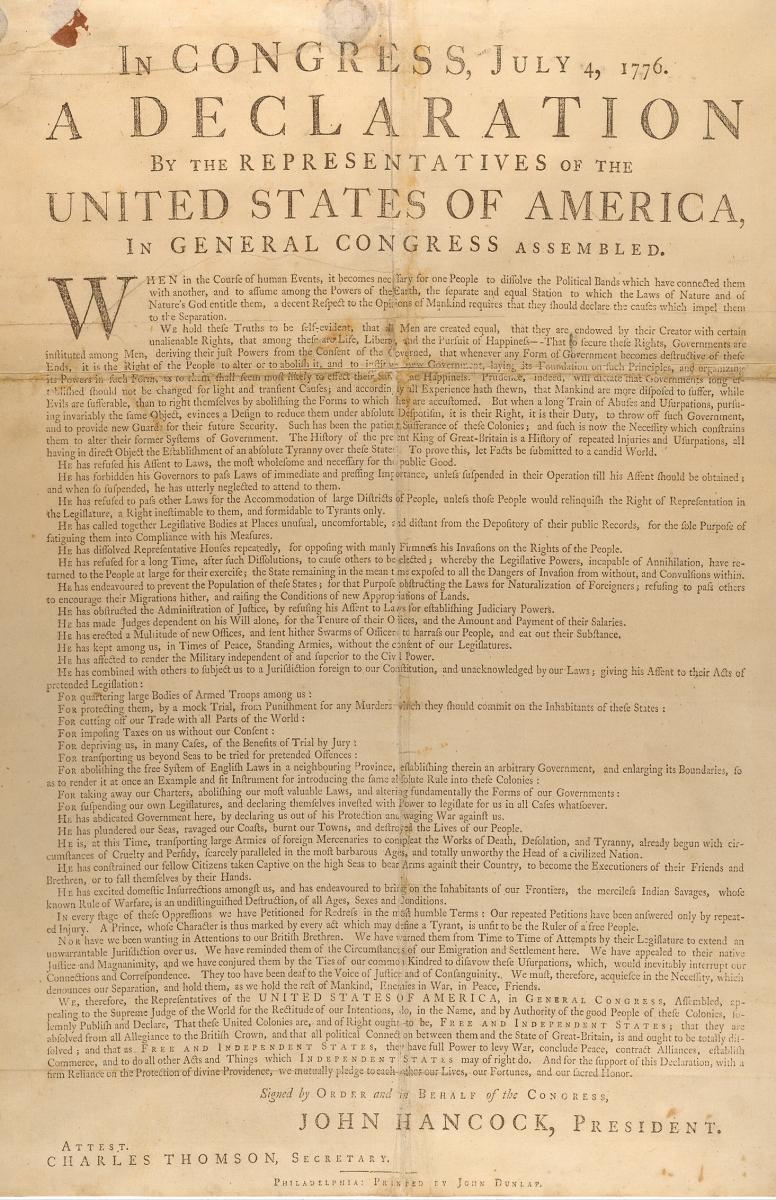 National Archives, Records of the Continental and Confederation Congresses and the Constitutional Convention

On June 11, 1776, Jefferson holed up in his Philadelphia boarding house and began to write. He borrowed freely from existing documents like the Virginia Declaration of Rights and incorporated accepted ideals of the Enlightenment. Jefferson later explained that “he was not striving for originality of principal or sentiment.” Instead, he hoped his words served as an “expression of the American mind.” Less than three weeks after he’d begun, he presented his draft to Congress. He was not pleased when Congress “mangled” his composition by cutting and changing much of his carefully chosen wording. He was especially sorry they removed the part blaming King George III for the slave trade, although he knew the time wasn’t right to deal with the issue.

On July 2, 1776, Congress voted to declare independence. Two days later, it ratified the text of the Declaration. John Dunlap, official printer to Congress, worked through the night to set the Declaration in type and print approximately 200 copies. These copies, known as the Dunlap Broadsides, were sent to various committees, assemblies, and commanders of the Continental troops. The Dunlap Broadsides weren’t signed, but John Hancock’s name appears in large type at the bottom. One copy crossed the Atlantic, reaching King George III months later. The official British response scolded the “misguided Americans” and “their extravagant and inadmissable Claim of Independency”.

What Does it Say? How Was it Made?