To ensure a more timely response to your inquiry, please contact us via email at [isoo@nara.gov / cui@nara.gov / iscap@nara.gov].  ISOO will use its blog, ISOO Overview to communicate with stakeholders on all ISOO matters.  Please join for weekly posts.

The State, Local, Tribal and Private Sector Policy Advisory Committee (SLTPS-PAC) will advise the President, the Secretary of Homeland Security, the Director of the Information Security Oversight Office (ISOO), and other executive branch officials on all matters concerning the oversight of the SLTPS Program.

Functions: To discuss program-related policy issues and advises on all matters concerning the policies relating to access and safeguarding of classified national security information by U.S. State, Local, Tribal, and Private Sector Entities, as specified in Executive Order 13549 and its implementing directive.

The U.S. Department of Homeland Security, in coordination with federal, state, and local partners, release the National Network of Fusion Centers Reports. These reports summarize and characterize the overall capabilities and performance of the National Network based on the results of yearly assessments. 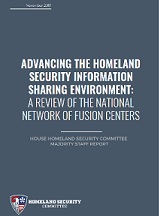 The U.S. House of Representatives Subcommittee on Counter-terrorism and Intelligence released in July 2013, the Majority Staff Report on the National Network of Fusion Centers