Aerial Photograph of Missiles in Cuba (1962) 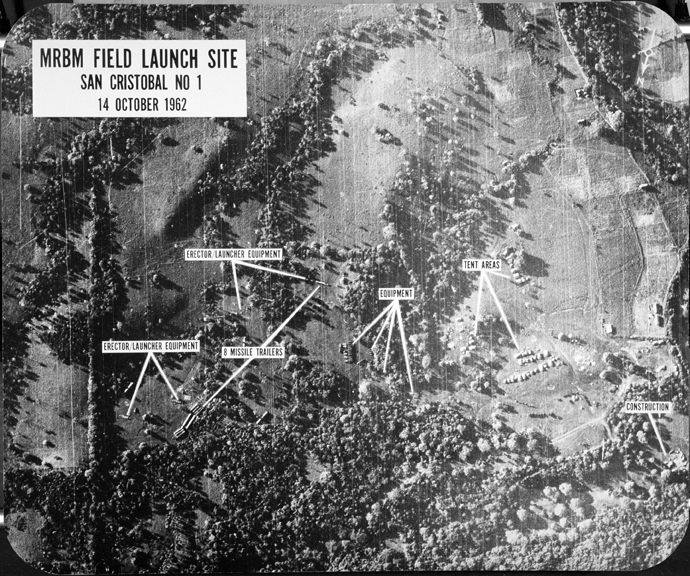 In the early stages of the Cuban missile crisis, this photograph showed that the Soviet Union was amassing offensive ballistic missiles in Cuba. President John F. Kennedy warned that any attempt by the Soviet Union to place nuclear weapons in Cuba would be seen as a threat to the United States.

Throughout 1962, in the midst of the Cold War, the movement of Soviet personnel and equipment to Cuba had aroused suspicions in the American intelligence community. In response, U.S. ships and planes began photographing every Cuba-bound Soviet vessel, and U-2 spy planes began regular reconnaissance flights over the island, just 90 miles off the coast of Florida.

On September 13, Kennedy warned Soviet Premier Khrushchev: "If at any time the Communist build-up in Cuba were to endanger or interfere with our security in any way...or if Cuba should ever...become an offensive military base of significant capacity for the Soviet Union, then this country will do whatever must be done to protect its own security and that of its allies." Despite Kennedy's warnings, the Soviets continued to construct the bases, and the United States continued to monitor their activities and take pictures.

Bad weather in the Caribbean the week of October 7, 1962, prevented American U-2 surveillance planes from making more reconnaissance flights over Fidel Castro's Cuba. But Sunday morning, October 14, was cloudless, and the U-2 flight took photographs that, over the next few days, were analyzed and reanalyzed.

These photographs provided positive proof of what the United States had for months suspected: that the Soviet Union was installing medium-range nuclear weapons in Cuba, capable of striking major U.S. cities and killing tens of millions of Americans within minutes. With the October 14 photographs, the United States caught the Soviet Union building offensive nuclear missile bases in its backyard, and the two superpowers were now joined in the first direct nuclear confrontation in history.

In a televised address on October 22, 1962, President Kennedy informed the American people of the presence of missile sties in Cuba. When the United States put a naval blockade in place around Cuba, tensions mounted, and the world wondered if there could be a peaceful resolution to the crisis. Kennedy's speech drew wide support in Latin America and among U.S. allies. The Pentagon continued plans for possible air strikes and a land invasion. Several Soviet vessels turned back from the quarantine line set by the navel blockade, and during a televised confrontation with the Soviet Union in the United Nations, the United States presented photographic proof of the missiles.

On Sunday, October 28, the Soviets agreed to remove the missiles from Cuba. Negotiations for final settlement of the crisis continued for several days, but the immediate threat of nuclear war had been averted. On November 20, Kennedy announced, "I have today been informed by Chairman Khrushchev that all of the IL-28 bombers in Cuba will be withdrawn in thirty days....I have this afternoon instructed the Secretary of Defense to lift our naval quarantine." In addition, the United States agreed that it would never participate in an invasion of Cuba, and Kennedy ordered the dismantling of several obsolete American air and missile bases in Turkey.