Transcript of John Glenn's Official Communication with the Command Center (1962) 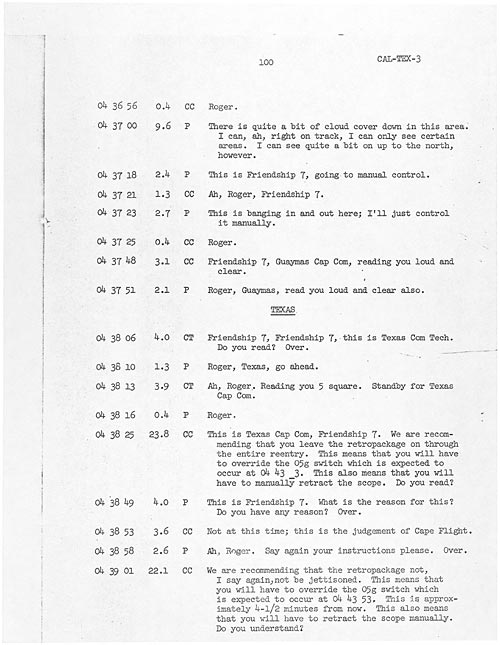 John Glenn conducted the first manned space orbit of the earth by an American on February 20, 1962. This is the transcription of his in-flight communication with Mission Control in Florida.

Soviet scientists stunned the world on October 4, 1957, when they launched a satellite, called Sputnik I, into orbit around the earth. It weighted 184 pounds. A month later they exceeded their previous mark by launching a larger satellite that weighed 1,120 pounds and carried a dog.

This amazing scientific accomplishment sent a shock wave through America. The military significance of Sputnik was lost on no one, for if the Soviets could fire heavy objects into outer space, they could certainly reach America with intercontinental missiles loaded with nuclear warheads. A space and arms race fever swept the nation, and by January 31, 1958, America regained some confidence and prestige by launching Explorer I, a grapefruit sized-sized (2.5 pounds) satellite, into orbit.

To stay competitive in this race, President Eisenhower proposed and Congress passed the National Defense and Education Act, which authorized $887 million in loans and grants to aid college students in teaching sciences and languages. Between 1958 and 1961, a series of unmanned launches by the Americans and the Soviets resulted in the launch of the first man into space by the Soviets on April 12, 1961. Just over 20 days later, on May 5, Alan B. Shepard, Jr., became the first American in space.

John Glenn blasted into orbit around the earth on February 20, 1962. Encased in a bulky pressurized suit, strapped into a seat, and crammed into a tiny capsule, Glenn put his life at risk as he traveled at 17,500 miles per hour 160 miles above Earth. With great skill, courage, and grace, Glenn manually piloted Friendship 7 when the autopilot function failed.

Mission Control was also concerned about whether the capsule's life-saving heat shield would hold when Glenn reentered the atmosphere. After Glenn began his second orbit, Mission Control received a signal that the heat shield, designed to prevent the capsule from burning up during reentry, was loose. Although it could have been a faulty signal, Mission Control took no chances. Normally, the retropacket package would be jettisoned after the rockets were fired to slow the capsule for reentry. In this case, however, Glenn was ordered to retain the retropack to hold the heat shield in place. While struggling to maintain control of the spacecraft, Glenn watched as huge chunks flew past the window and wondered whether it was the retropack or heat shield breaking up. The heat shield held. If it hadn't, Glenn and his capsule would have been incinerated.

Glenn returned to Earth after five hours, suffering no injury more severe than scraped knuckles, sustained as he prepared to exit the capsule after a safe splashdown.

In the flood of enthusiasm after Glenn’s flight, President John F. Kennedy proposed a new challenge on September 12, 1962, in an address at Rice University:

There is no strife, no prejudice, no national conflict in outer space as yet. Its hazards are hostile to us all. Its conquest deserves the best of all mankind, and its opportunity for peaceful cooperation many never come again. But why, some say, the moon? Why choose this as our goal? And they may well ask why climb the highest mountain? Why, 35 years ago, fly the Atlantic? Why does Rice play Texas?

The document presented here is a page of the official flight transcript of Glenn's 1962 spaceflight document the reentry.