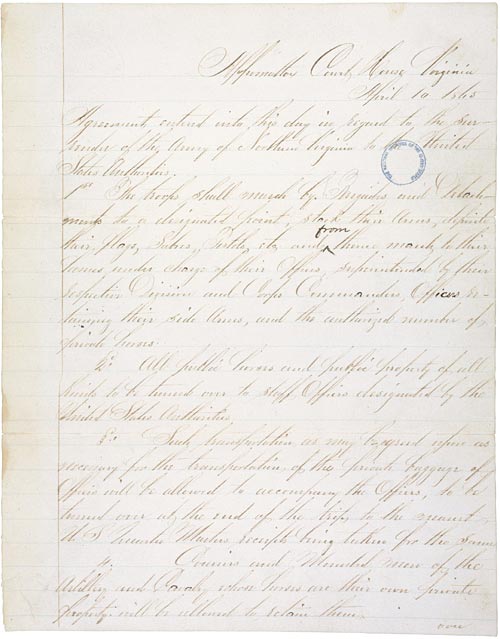 Citation: Articles of Agreement in Regard to the Surrender of the Army of Northern Virginia under Gen. Robert E. Lee, April 10, 1865; War Department, Record and Pension Office, 1892-1904; Records of the Adjutant General's Office, 1780's-1917; Record Group 94; National Archives.

On April 9, 1865, Generals Ulysses S. Grant and Robert E. Lee met in the parlor of a house in Appomattox Court House, Virginia, to discuss the surrender of the Army of Northern Virginia, which would effectively end the Civil War.

After the fall of Richmond, the Confederate capital, on April 2, 1865, officials in the Confederate government, including President Jefferson Davis, fled. The dominoes began to fall. The surrender at Appomattox took place a week later on April 9th.

Generals Ulysses S. Grant and Robert E. Lee met in the parlor of a house in Appomattox Court House, Virginia, to discuss the surrender of the Army of Northern Virginia. The surrender formalities lasted four days. The terms were generous: the men of Lee's army could return home in safety if they pledged to end the fighting and deliver their arms to the Union Army.

On April 12, 1865, in a quiet but emotional ceremony, the infantry of Lee's army surrendered their arms, folded their battle flags, and received their parole papers, which guaranteed them safe passage home.

While it was the most significant surrender to take place during the Civil War, Gen. Robert E. Lee, the Confederacy's most respected commander, surrendered only his Army of Northern Virginia to Union Gen. Ulysses S. Grant. Several other Confederate forces – some large units, some small – had yet to surrender before President Andrew Johnson could declare that the Civil War was officially over.

The Grant-Lee agreement served not only as a signal that the South had lost the war but also as a model for the rest of the surrenders that followed. After Richmond fell and Davis fled, Confederate commanders were on their own to surrender their commands to Union forces. Surrenders, paroles, and amnesty for many Confederate combatants would take place over the next several months and into 1866 throughout the South and border states.

Not until 16 months after Appomattox, on August 20, 1866, did the President formally declare an end to the war.

Agreement entered into this day in regard to the surrender of the Army of Northern Virginia to the United States Authorities.

1st The troops shall march by Brigades and Detachments to a designated point, stack their Arms, deposit their flags, Sabres, Pistols, etc. and from thence march to their homes under charge of their Officers, superintended by their respective Division and Corps Commanders, Officers, retaining their side Arms, and the authorized number of private horses.

2. All public horses and public property of all kinds to be turned over to Staff Officers designated by the United States Authorities.

3. Such transportation as may be agreed upon as necessary for the transportation of the Private baggage of Officers will be allowed to accompany the Officers, to be turned over at the end of the trip to the nearest U.S. Quarter Masters, receipts being taken for the same.

4. Couriers and Wounded men of the artillery and Cavalry whose horses are their own private property will be allowed to retain them.

5. The surrender of the Army of Northern Virginia shall be construed to include all the forces operating with that Army on the 8th inst., the date of commencement of negociation for surrender, except such bodies of Cavalry as actually made their escape previous to the surrender, and except also such forces of Artillery as were more than Twenty (20) miles from Appomattox Court House at the time of Surrender on the 9th inst.