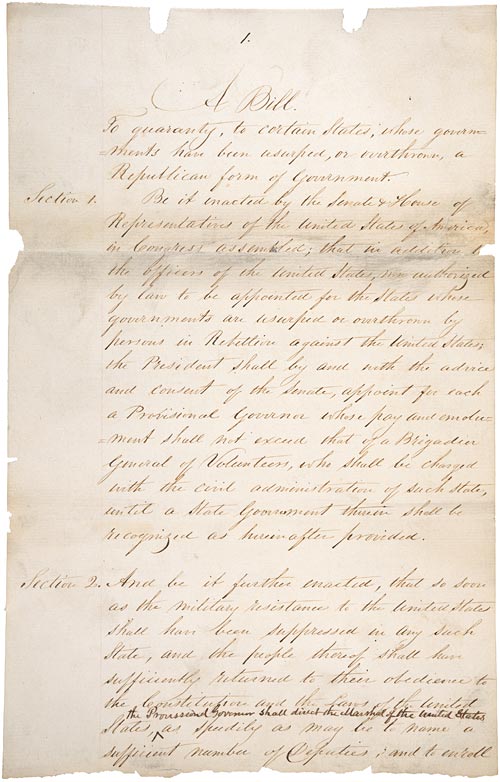 At the end of the Civil War, this bill created a framework for Reconstruction and the re-admittance of the Confederate states to the Union.

In late 1863, President Abraham Lincoln and Congress began to consider the question of how the Union would be reunited if the North won the Civil War. In December, President Lincoln proposed a reconstruction program that would allow Confederate states to establish new state governments after 10 percent of their male population took loyalty oaths and the states recognized the permanent freedom of formerly enslaved people.

The Wade-Davis Reconstruction Bill would also have abolished slavery, but it required that 50 percent of a state's White males take a loyalty oath to the United States (and swear they had never assisted the Confederacy) to be readmitted to the Union. Only after taking this "Ironclad Oath" would they be able to participate in conventions to write new state constitutions.

Congress passed the Wade-Davis Bill, but President Lincoln chose not to sign it, killing the bill with a pocket veto. Lincoln continued to advocate tolerance and speed in plans for the reconstruction of the Union in opposition to Congress.

After Lincoln’s assassination in April 1865, however, Congress had the upper hand in shaping federal policy toward the defeated South and imposed the harsher reconstruction requirements first advocated in the Wade-Davis Bill.

A Bill to guarantee to certain States whose Governments have been usurped or overthrown a Republican Form of Government.

Section 1. Be it enacted by the Senate and House of Representatives of the United States of America in Congress assembled, That in the states declared in rebellion against the United States, the President shall, by and with the advice and consent of the Senate, appoint for each a provisional governor, whose pay and emoluments shall not exceed that of a brigadier-general of volunteers, who shall be charged with the civil administration of such state until a state government therein shall be recognized as hereinafter provided.


Section 3. And be it further enacted, That the convention shall consist of as many members as both houses of the last constitutional state legislature, apportioned by the provisional governor among the counties, parishes, or districts of the state, in proportion to the white population, returned as electors, by the marshal, in compliance with the provisions of this act. The provisional governor shall, by proclamation, declare the number of delegates to be elected by each county, parish, or election district; name a day of election not less than thirty days thereafter; designate the places of voting in each county, parish, or district, conforming as nearly as may be convenient to the places used in the state elections next preceding the rebellion; appoint one or more commissioners to hold the election at each place of voting, and provide an adequate force to keep the peace during the election.

Section 5. And be it further enacted, That the said commissioners, or either of them, shall hold the election in conformity with this act, and, so far as may be consistent therewith, shall proceed in the manner used in the state prior to the rebellion. The oath of allegiance shall be taken and subscribed on the poll-book by every voter in the form above prescribed, but every person known by or proved to, the commissioners to have held or exercised any office, civil or military, state or confederate, under the rebel usurpation, or to have voluntarily borne arms against the United States, shall be excluded, though he offer to take the oath; and in case any person who shall have borne arms against the United States shall offer to vote he shall be deemed to have borne arms voluntarily unless he shall prove the contrary by the testimony of a qualified voter. The poll-book, showing the name and oath of each voter, shall be returned to the provisional governor by the commissioners of election or the one acting, and the provisional governor shall canvass such returns, and declare the person having the highest number of votes elected.

Section 6. And be it further enacted, That the provisional governor shall, by proclamation, convene the delegates elected as aforesaid, at the capital of the state, on a day not more than three months after the election, giving at least thirty days' notice of such day. In case the said capital shall in his judgment be unfit, he shall in his proclamation appoint another place. He shall preside over the deliberations of the convention, and administer to each delegate, before taking his seat in the convention, the oath of allegiance to the United States in the form above prescribed.

Section 7. And be it further enacted, That the convention shall declare, on behalf of the people of the state, their submission to the constitution and laws of the United States, and shall adopt the following provisions, hereby prescribed by the United States in the execution of the constitutional duty to guarantee a republican form of government to every state, and incorporate them in the constitution of the state, that is to say:
First. No person who has held or exercised any office, civil or military, except offices merely ministerial, and military offices below the grade of colonel, state or confederate, under the usurping power, shall vote for or be a member of the legislature, or governor.
Second. Involuntary servitude is forever prohibited, and the freedom of all persons is guaranteed in said state.
Third. No debt, state or confederate, created by or under the sanction of the usurping power, shall be recognized or paid by the state.

Section 8. And be it further enacted, That when the convention shall have adopted those provisions, it shaII proceed to re-establish a republican form of government, and ordain a constitution containing those provisions, which, when adopted the convention shall by ordinance provide for submitting to the people of the state, entitled to vote under this law, at an election to be held in the manner prescribed by the act for the election of delegates; but at a time and place named by the convention, at which election the said electors, and none others, shall vote directly for or against such constitution and form of state government, and the returns of said election shall be made to the provisional governor, who shall canvass the same in the presence of the electors, and if a majority of the votes cast shall be for the constitution and form of government, he shall certify the same, with a copy thereof, to the President of the United States, who, after obtaining the assent of congress, shall, by proclamation, recognize the government so established, and none other, as the constitutional government of the state, and from the date of such recognition, and not before, Senators and Representatives, and electors for President and Vice President may be elected in such state, according to the laws of the state and of the United States.

Section 9. And be it further enacted, That if the convention shall refuse to reestablish the state government on the conditions aforesaid, the provisional governor shall declare it dissolved; but it shall be the duty of the President, whenever he shall have reason to believe that a sufficient number of the people of the state entitled to vote under this act, in number not less than a majority of those enrolled, as aforesaid, are willing to reestablish a state government on the conditions aforesaid, to direct the provisional governor to order another election of delegates to a convention for the purpose and in the manner prescribed in this act, and to proceed in all respects as hereinbefore provided, either to dissolve the convention, or to certify the state government reestablished by it to the President.

Section 10. And be it further enacted, That, until the United States shall have recognized a republican form of state government, the provisional governor in each of said states shall see that this act, and the laws of the United States, and the laws of the state in force when the state government was overthrown by the rebellion, are faithfully executed within the state; but no law or usage whereby any person was heretofore held in involuntary servitude shall be recognized or enforced by any court or officer in such state, and the laws for the trial and punishment of white persons shall extend to all persons, and jurors shall have the qualifications of voters under this law for delegates to the convention. The President shall appoint such officers provided for by the laws of the state when its government was overthrown as he may find necessary to the civil administration of the slate, all which officers shall be entitled to receive the fees and emoluments provided by the state laws for such officers.

Section 11. And be it further enacted, That until the recognition of a state government as aforesaid, the provisional governor shall, under such regulations as he may prescribe, cause to be assessed, levied, and collected, for the year eighteen hundred and sixty-four, and every year thereafter, the taxes provided by the laws of such state to be levied during the fiscal year preceding the overthrow of the state government thereof, in the manner prescribed by the laws of the state, as nearly as may be; and the officers appointed, as aforesaid, are vested with all powers of levying and collecting such taxes, by distress or sale, as were vested in any officers or tribunal of the state government aforesaid for those purposes. The proceeds of such taxes shall be accounted for to the provisional governor, and be by him applied to the expenses of the administration of the laws in such state, subject to the direction of the President, and the surplus shall be deposited in the treasury of the United States to the credit of such state, to be paid to the state upon an appropriation therefor, to be made when a republican form of government shall be recognized therein by the United States.
Section 12. And be it further enacted, that all persons held to involuntary servitude or labor in the states aforesaid are hereby emancipated and discharged therefrom, and they and their posterity shall be forever free. And if any such persons or their posterity shall be restrained of liberty, under pretence of any claim to such service or labor, the courts of the United States shall, on habeas corpus, discharge them.

Section 13. And be it further enacted, That if any person declared free by this act, or any law of the United States, or any proclamation of the President, be restrained of liberty, with intent to be held in or reduced to involuntary servitude or labor, the person convicted before a court of competent jurisdiction of such act shall be punished by fine of not less than fifteen hundred dollars, and be imprisoned not less than five nor more than twenty years.

Section 14. And be it further enacted, That every person who shall hereafter hold or exercise any office, civil or military, except offices merely ministerial, and military offices below the grade of colonel, in the rebel service, state or confederate, is hereby declared not to be a citizen of the United States.
Top