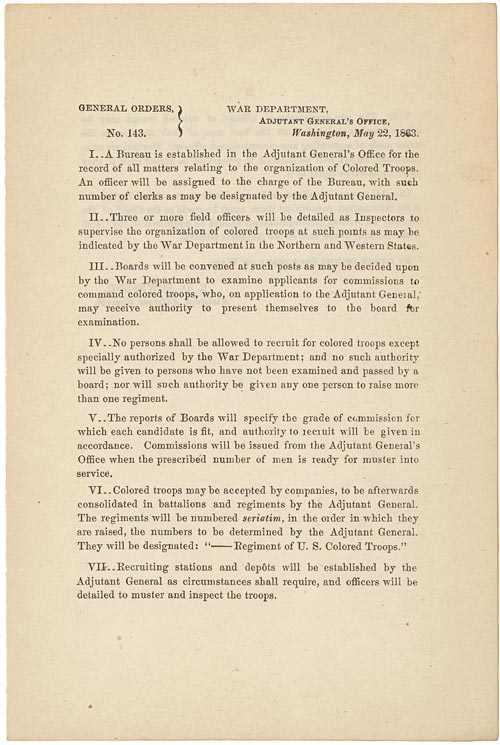 The issues of emancipation and military service were intertwined from the onset of the Civil War. News that the Confederacy had attacked the U.S. garrison at Fort Sumter in Charleston, South Carolina – which began the Civil War in earnest – set off a rush by free Black men to enlist in U.S. military units. They were turned away, however, because a 1792 federal law barred them from bearing arms for the U.S. Army. In Boston, disappointed would-be volunteers met and passed a resolution requesting that the government modify its laws to permit their enlistment.

President Lincoln's administration wrestled with the idea of authorizing the recruitment of Black troops, but was concerned that such a move would prompt the border states to secede. When General John C. Frémont in Missouri and General David Hunter in South Carolina issued proclamations that emancipated enslaved people in their military regions and permitted them to enlist, their superiors sternly revoked their orders. By mid-1862, however, the government was pushed into reconsidering the ban because of the escalating number of formerly enslaved people coming over Union lines (referred to in the military as "contrabands"), the declining number of white volunteers, and the pressing personnel needs of the Union Army.

As a result, on July 17, 1862, Congress passed the Second Confiscation and Militia Act, freeing enslaved people whose enslavers were in the Confederate Army. Two days later, slavery was abolished in the territories of the United States; and on July 22, 1862, President Lincoln presented the preliminary draft of the Emancipation Proclamation to his Cabinet.

After the Union Army turned back Confederate General Robert E. Lee's first invasion of the North at Antietam, Maryland, and the Emancipation Proclamation was subsequently announced, Black recruitment was pursued in earnest. Volunteers from South Carolina, Tennessee, and Massachusetts filled the first authorized Black regiments. Recruitment was slow until Black leaders such as Frederick Douglass encouraged Black men to become soldiers to ensure eventual full citizenship. (Two of Douglass's own sons contributed to the war effort.) Volunteers began to respond; and in May 1863, the government established the Bureau of Colored Troops to manage the burgeoning numbers of Black soldiers.

Nearly 40,000 Black soldiers died over the course of the war—30,000 of infection or disease. Black soldiers served in artillery and infantry and performed all non-combat support functions that sustain an army as well. Black carpenters, chaplains, cooks, guards, laborers, nurses, scouts, spies, steamboat pilots, surgeons, and teamsters also contributed to the war cause. There were nearly 80 Black commissioned officers. Black women, who could not formally join the Army, nonetheless served as nurses, spies, and scouts, the most famous being Harriet Tubman, who scouted for the 2nd South Carolina Volunteers.

I -- A Bureau is established in the Adjutant General's Office for the record of all matters relating to the organization of Colored Troops, An officer ,will be assigned to the charge of the Bureau, with such number of clerks as may be designated by the Adjutant General.

II -- Three or more field officers will be detailed as Inspectors to supervise the organization of colored troops at such points as may be indicated by the War Department in the Northern and Western States.

III -- Boards will be convened at such posts as may be decided upon by the War Department to examine applicants for commissions to command colored troops, who, on Application to the Adjutant General, may receive authority to present themselves to the board for examination.

IV -- No persons shall be allowed to recruit for colored troops except specially authorized by the War Department; and no such authority will be given to persons who have not been examined and passed by a board; nor will such authority be given any one person to raise more than one regiment.

V -- The reports of Boards will specify the grade of commission for which each candidate is fit, and authority to recruit will be given in accordance. Commissions will be issued from the Adjutant General's Office when the prescribed number of men is ready for muster into service.

VII -- Recruiting stations and depots will be established by the Adjutant General as circumstances shall require, and officers will be detailed to muster and inspect the troops.

BY ORDER OF THE SECRETARY OF WAR:
E. D. TOWNSEND,
Assistant Adjutant General