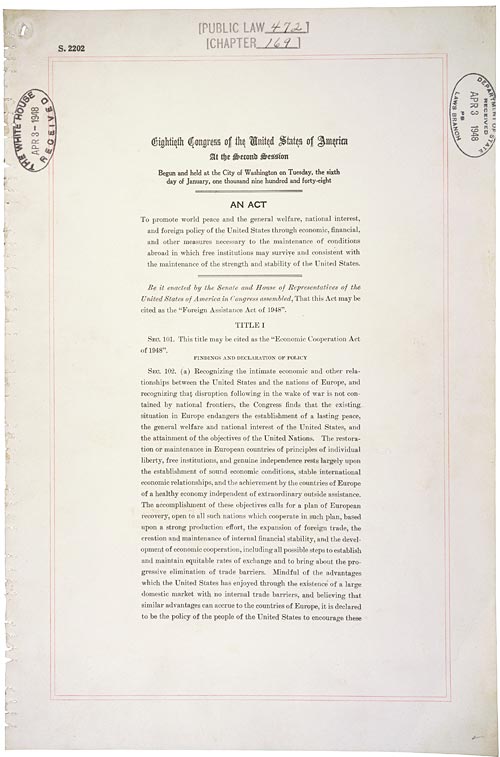 On April 3, 1948, President Truman signed the Economic Recovery Act of 1948. It became known as the Marshall Plan, named for Secretary of State George Marshall, who in 1947 proposed that the United States provide economic assistance to restore the economic infrastructure of postwar Europe.

When World War II ended in 1945, Europe lay in ruins: its cities were shattered; its economies were devastated; its people faced famine. In the two years after the war, the Soviet Union’s control of Eastern Europe and the vulnerability of Western European countries to Soviet expansionism heightened the sense of crisis.

To meet this emergency, Secretary of State George Marshall proposed in a speech at Harvard University on June 5, 1947, that European nations create a plan for their economic reconstruction and that the United States provide economic assistance.

On December 19, 1947, President Harry Truman sent Congress a message that followed Marshall’s ideas to provide economic aid to Europe. Congress overwhelmingly passed the Economic Cooperation Act of 1948, and on April 3, 1948, President Truman signed the act that became known as the Marshall Plan.

Over the next four years, Congress appropriated $13.3 billion for European recovery. This aid provided much needed capital and materials that enabled Europeans to rebuild the continent’s economy.

For the United States, the Marshall Plan provided markets for American goods, created reliable trading partners, and supported the development of stable democratic governments in Western Europe. Congress’s approval of the Marshall Plan signaled an extension of the bipartisanship of World War II into the postwar years.

I need not tell you gentlemen that the world situation is very serious. That must be apparent to all intelligent people. I think one difficulty is that the problem is one of such enormous complexity that the very mass of facts presented to the public by press and radio make it exceedingly difficult for the man in the street to reach a clear appraisement of the situation. Furthermore, the people of this country are distant from the troubled areas of the earth and it is hard for them to comprehend the plight and consequent reaction of the long-suffering peoples, and the effect of those reactions on their governments in connection with our efforts to promote peace in the world.

In considering the requirements for the rehabilitation of Europe the physical loss of life, the visible destruction of cities, factories, mines, and railroads was correctly estimated, but it has become obvious during recent months that this visible destruction was probably less serious than the dislocation of the entire fabric of European economy. For the past 10 years conditions have been highly abnormal. The feverish maintenance of the war effort engulfed all aspects of national economics. Machinery has fallen into disrepair or is entirely obsolete. Under the arbitrary and destructive Nazi rule, virtually every possible enterprise was geared into the German war machine. Long-standing commercial ties, private institutions, banks, insurance companies and shipping companies disappeared, through the loss of capital, absorption through nationalization or by simple destruction. In many countries, confidence in the local currency has been severely shaken. The breakdown of the business structure of Europe during the war was complete. Recovery has been seriously retarded by the fact that 2 years after the close of hostilities a peace settlement with Germany and Austria has not been agreed upon. But even given a more prompt solution of these difficult problems, the rehabilitation of the economic structure of Europe quite evidently will require a much longer time and greater effort than had been foreseen.

There is a phase of this matter which is both interesting and serious. The farmer has always produced the foodstuffs to exchange with the city dweller for the other necessities of life. This division of labor is the basis of modern civilization. At the present time it is threatened with breakdown. The town and city industries are not producing adequate goods to exchange with the food-producing farmer. Raw materials and fuel are in short supply. Machinery is lacking or worn out. The farmer or the peasant cannot find the goods for sale which he desires to purchase. So the sale of his farm produce for money which he cannot use seems to him unprofitable transaction. He, therefore, has withdrawn many fields from crop cultivation and is using them for grazing. He feeds more grain to stock and finds for himself and his family an ample supply of food, however short he may be on clothing and the other ordinary gadgets of civilization. Meanwhile people in the cities are short of food and fuel. So the governments are forced to use their foreign money and credits to procure these necessities abroad. This process exhausts funds which are urgently needed for reconstruction. Thus a very serious situation is rapidly developing which bodes no good for the world. The modern system of the division of labor upon which the exchange of products is based is in danger of breaking down.

The truth of the matter is that Europe's requirements for the next 3 or 4 years of foreign food and other essential products -- principally from America -- are so much greater than her present ability to pay that she must have substantial additional help, or face economic, social, and political deterioration of a very grave character.

The remedy lies in breaking the vicious circle and restoring the confidence of the European people in the economic future of their own countries and of Europe as a whole. The manufacturer and the farmer throughout wide areas must be able and willing to exchange their products for currencies the continuing value of which is not open to question.

Aside from the demoralizing effect on the world at large and the possibilities of disturbances arising as a result of the desperation of the people concerned, the consequences to the economy of the United States should be apparent to all. It is logical that the United States should do whatever it is able to do to assist in the return of normal economic health in the world, without which there can be no political stability and no assured peace. Our policy is directed not against any country or doctrine but against hunger, poverty, desperation, and chaos. Its purpose should be the revival of working economy in the world so as to permit the emergence of political and social conditions in which free institutions can exist. Such assistance, I am convinced, must not be on a piecemeal basis as various crises develop. Any assistance that this Government may render in the future should provide a cure rather than a mere palliative. Any government that is willing to assist in the task of recovery will find full cooperation, I am sure, on the part of the United States Government. Any government which maneuvers to block the recovery of other countries cannot expect help from us. Furthermore, governments, political parties, or groups which seek to perpetuate human misery in order to profit therefrom politically or otherwise will encounter the opposition of the United States.

It is already evident that, before the United States Government can proceed much further in its efforts to alleviate the situation and help start the European world on its way to recovery, there must be some agreement among the countries of Europe as to the requirements of the situation and the part those countries themselves will take in order to give proper effect to whatever action might be undertaken by this Government. It would be neither fitting nor efficacious for this Government to undertake to draw up unilaterally a program designed to place Europe on its feet economically. This is the business of the Europeans. The initiative, I think, must come from Europe. The role of this country should consist of friendly aid in the drafting of a European program so far as it may be practical for us to do so. The program should be a joint one, agreed to by a number, if not all European nations.

An essential part of any successful action on the part of the United States is an understanding on the part of the people of America of the character of the problem and the remedies to be applied. Political passion and prejudice should have no part. With foresight, and a willingness on the part of our people to face up to the vast responsibilities which history has clearly placed upon our country, the difficulties I have outlined can and will be overcome.

Begun and held at the City of Washington on Tuesday, the sixth day of January, one thousand nine hundred and forty-eight

Be it enacted by the Senate and the House of Represenatives of the United States of American in Congress assembled, That this Act may be cited as the "Foreign Asistance Act of 1948".

Sec. 102. (a) Recognizing the intimate economic and other relationships betwen the United States and the nations of Europe, and recognizing that disruption following in the wake of war is not contained by national frontiers, the Congress finds that the existing situation in Europe endangers the establishment of a lasting peace, the general welfare and national interest of the United States, and the attainment of the objectives of the United Nations. The restoration or maintenance in European countries of principles of individual liberty, free institutions, and genuine independence rests largely upon the establishment of sound economic conditions, stable international economic relationships, and the achievement by the countries of Europe of a health economy independent of extraordinary outside assistance. The accomplishment of these objectives calls for a plan of European recovery, open to all such nations which cooperate in such plan, based upon a strong production effort, the expansion of foreign trade, the creation and maintenace of internal financial stability, and the development of economic cooperation, including all possible steps to establish and maintain equitable rates of exchange and to bring about the progressive elimination of trade barriers. Mindful of the advantages the Unted States has enjoyed through the existence of a large domestic market with no internal trade barriers, and believing that similar advantages can accrue to the countries of Europe, it is declared to be the policy of the people of the United States to encourage these ...

Economic Corporation, may deem necessary to carry out the purposes of this title and to improve commercial relations with China.

Sec. 407. (a) The Secretary of State, after consultation with the Administrator, is hereby authorized to conclude and agreement with China establishing a Joint Commission of Rural Reconstruction in China, to be composed of two citizens of the United States appointed by the President of the United States and three citizens of China appointed by the President of China. Such Commission shall, subject to the direction and control of the Administrator, formulate and carry out a program for reconstruction in rural areas of China, which shall include such research and training activities as may be necessary or appropriate for such reconstruction: Provided, That assistance furnished under this section shall not be construed as an express or implied assumption by the Unted States of any responsibility for making an futher contributions to carry out the purposes of this section.