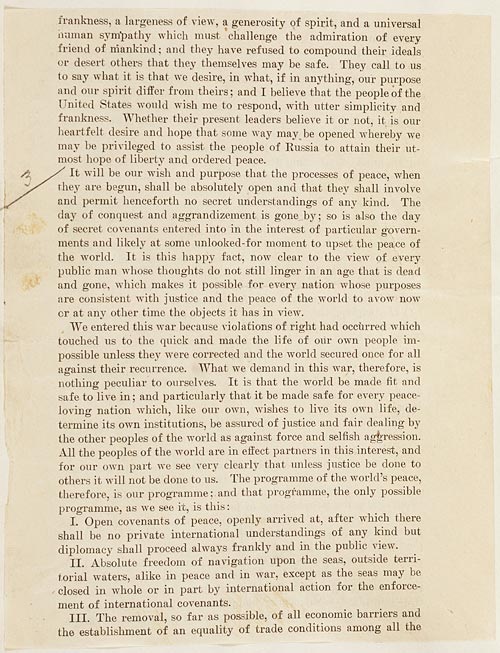 In this January 8, 1918, address to Congress, President Woodrow Wilson proposed a 14-point program for world peace. These points were later taken as the basis for peace negotiations at the end of World War I.

In this January 8, 1918, speech on War Aims and Peace Terms, President Wilson set down 14 points as a blueprint for world peace that was to be used for peace negotiations after World War I. The details of the speech were based on reports generated by “The Inquiry,” a group of about 150 political and social scientists organized by Wilson’s adviser and long-time friend, Col. Edward M House. Their job was to study Allied and American policy in virtually every region of the globe and analyze economic, social, and political facts likely to come up in discussions during the peace conference. The team began its work in secret, and in the end produced and collected nearly 2,000 separate reports and documents plus at least 1,200 maps.

In the speech, Wilson directly addressed what he perceived as the causes for the world war by calling for the abolition of secret treaties, a reduction in armaments, an adjustment in colonial claims in the interests of both native peoples and colonists, and freedom of the seas. Wilson also made proposals that would ensure world peace in the future. For example, he proposed the removal of economic barriers between nations, the promise of “self-determination” for oppressed minorities, and a world organization that would provide a system of collective security for all nations. Wilson’s 14 Points were designed to undermine the Central Powers’ will to continue, and to inspire the Allies to victory. The 14 Points were broadcast throughout the world and were showered from rockets and shells behind the enemy’s lines.

When Allied leaders met in Versailles, France, to formulate the treaty to end World War I with Germany and Austria-Hungary, most of Wilson’s 14 Points were scuttled by the leaders of England and France. To his dismay, Wilson discovered that England, France, and Italy were mostly interested in regaining what they had lost and gaining more by punishing Germany. Germany quickly found out that Wilson’s blueprint for world peace would not apply to them.

However, Wilson’s capstone point calling for a world organization that would provide some system of collective security was incorporated into the Treaty of Versailles. This organization would later be known as the League of Nations. Though Wilson launched a tireless missionary campaign to overcome opposition in the U.S. Senate to the adoption of the treaty and membership in the League, the treaty was never adopted by the Senate, and the United States never joined the League of Nations. Wilson would later suggest that without American participation in the League, there would be another world war within a generation.

It will be our wish and purpose that the processes of peace, when they are begun, shall be absolutely open and that they shall involve and permit henceforth no secret understandings of any kind. The day of conquest and aggrandizement is gone by; so is also the day of secret covenants entered into in the interest of particular governments and likely at some unlooked-for moment to upset the peace of the world. It is this happy fact, now clear to the view of every public man whose thoughts do not still linger in an age that is dead and gone, which makes it possible for every nation whose purposes are consistent with justice and the peace of the world to avow now or at any other time the objects it has in view.

We entered this war because violations of right had occurred which touched us to the quick and made the life of our own people impossible unless they were corrected and the world secure once for all against their recurrence. What we demand in this war, therefore, is nothing peculiar to ourselves. It is that the world be made fit and safe to live in; and particularly that it be made safe for every peace-loving nation which, like our own, wishes to live its own life, determine its own institutions, be assured of justice and fair dealing by the other peoples of the world as against force and selfish aggression. All the peoples of the world are in effect partners in this interest, and for our own part we see very clearly that unless justice be done to others it will not be done to us. The programme of the world's peace, therefore, is our programme; and that programme, the only possible programme, as we see it, is this:

I. Open covenants of peace, openly arrived at, after which there shall be no private international understandings of any kind but diplomacy shall proceed always frankly and in the public view.

II. Absolute freedom of navigation upon the seas, outside territorial waters, alike in peace and in war, except as the seas may be closed in whole or in part by international action for the enforcement of international covenants.

III. The removal, so far as possible, of all economic barriers and the establishment of an equality of trade conditions among all the nations consenting to the peace and associating themselves for its maintenance.

IV. Adequate guarantees given and taken that national armaments will be reduced to the lowest point consistent with domestic safety.

V. A free, open-minded, and absolutely impartial adjustment of all colonial claims, based upon a strict observance of the principle that in determining all such questions of sovereignty the interests of the populations concerned must have equal weight with the equitable claims of the government whose title is to be determined.

VI. The evacuation of all Russian territory and such a settlement of all questions affecting Russia as will secure the best and freest cooperation of the other nations of the world in obtaining for her an unhampered and unembarrassed opportunity for the independent determination of her own political development and national policy and assure her of a sincere welcome into the society of free nations under institutions of her own choosing; and, more than a welcome, assistance also of every kind that she may need and may herself desire. The treatment accorded Russia by her sister nations in the months to come will be the acid test of their good will, of their comprehension of her needs as distinguished from their own interests, and of their intelligent and unselfish sympathy.

VII. Belgium, the whole world will agree, must be evacuated and restored, without any attempt to limit the sovereignty which she enjoys in common with all other free nations. No other single act will serve as this will serve to restore confidence among the nations in the laws which they have themselves set and determined for the government of their relations with one another. Without this healing act the whole structure and validity of international law is forever impaired.

VIII. All French territory should be freed and the invaded portions restored, and the wrong done to France by Prussia in 1871 in the matter of Alsace-Lorraine, which has unsettled the peace of the world for nearly fifty years, should be righted, in order that peace may once more be made secure in the interest of all.

IX. A readjustment of the frontiers of Italy should be effected along clearly recognizable lines of nationality.

X. The peoples of Austria-Hungary, whose place among the nations we wish to see safeguarded and assured, should be accorded the freest opportunity to autonomous development.

XI. Rumania, Serbia, and Montenegro should be evacuated; occupied territories restored; Serbia accorded free and secure access to the sea; and the relations of the several Balkan states to one another determined by friendly counsel along historically established lines of allegiance and nationality; and international guarantees of the political and economic independence and territorial integrity of the several Balkan states should be entered into.

XII. The Turkish portion of the present Ottoman Empire should be assured a secure sovereignty, but the other nationalities which are now under Turkish rule should be assured an undoubted security of life and an absolutely unmolested opportunity of autonomous development, and the Dardanelles should be permanently opened as a free passage to the ships and commerce of all nations under international guarantees.

XIII. An independent Polish state should be erected which should include the territories inhabited by indisputably Polish populations, which should be assured a free and secure access to the sea, and whose political and economic independence and territorial integrity should be guaranteed by international covenant.

XIV. A general association of nations must be formed under specific covenants for the purpose of affording mutual guarantees of political independence and territorial integrity to great and small states alike.

In regard to these essential rectifications of wrong and assertions of right we feel ourselves to be intimate partners of all the governments and peoples associated together against the Imperialists. We cannot be separated in interest or divided in purpose. We stand together until the end.

For such arrangements and covenants we are willing to fight and to continue to fight until they are achieved; but only because we wish the right to prevail and desire a just and stable peace such as can be secured only by removing the chief provocations to war, which this programme does remove. We have no jealousy of German greatness, and there is nothing in this programme that impairs it. We grudge her no achievement or distinction of learning or of pacific enterprise such as have made her record very bright and very enviable. We do not wish to injure her or to block in any way her legitimate influence or power. We do not wish to fight her either with arms or with hostile arrangements of trade if she is willing to associate herself with us and the other peace- loving nations of the world in covenants of justice and law and fair dealing. We wish her only to accept a place of equality among the peoples of the world, -- the new world in which we now live, -- instead of a place of mastery.