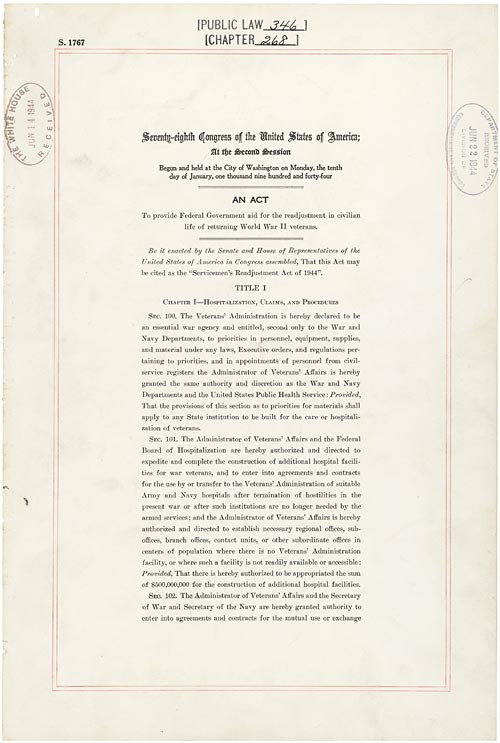 Signed into law by President Franklin D. Roosevelt on June 22, 1944, this act, also known as the G.I. Bill, provided World War II veterans with funds for college education, unemployment insurance, and housing. It put higher education within the reach of millions of veterans of WWII and later military conflicts.

While World War II was still being fought, the Department of Labor estimated that, after the war, 15 million men and women who had been serving in the armed services would be unemployed. To reduce the possibility of postwar depression brought on by widespread unemployment, the National Resources Planning Board, a White House agency, studied postwar manpower needs as early as 1942 and in June 1943 recommended a series of programs for education and training.

The American Legion designed the main features of what became the Serviceman’s Readjustment Act and pushed it through Congress. The bill unanimously passed both chambers of Congress in the spring of 1944. President Franklin D. Roosevelt signed it into law on June 22, 1944, just days after the D-day invasion of Normandy.

American Legion publicist Jack Cejnar called it "the GI Bill of Rights,” as it offered Federal aid to help veterans adjust to civilian life in the areas of hospitalization, purchase of homes and businesses, and especially, education. This act provided tuition, subsistence, books and supplies, equipment, and counseling services for veterans to continue their education in school or college.

Within the following seven years, approximately eight million veterans received educational benefits. Under the act, approximately 2,300,000 attended colleges and universities, 3,500,000 received school training, and 3,400,000 received on-the-job training. The number of degrees awarded by U.S. colleges and universities more than doubled between 1940 and 1950, and the percentage of Americans with bachelor degrees, or advanced degrees, rose from 4.6 percent in 1945 to 25 percent a half-century later.

Unfortunately, not all veterans were able to take advantage of the benefits of the G.I. Bill. Black vets were often unable to get bank loans for mortgages in Black neighborhoods, and they faced prejudice and discrimination that overwhelming excluded them from buying homes in "white" suburban neighborhoods.

By 1956, when the G.I. Bill expired, the education-and-training portion had disbursed $14.5 billion to veterans—but the Veterans Administration estimated the increase in Federal income taxes alone would pay for the cost of the bill several times over. By 1955, 4.3 million home loans had been granted, with a total face value of $33 billion.

In addition, veterans were responsible for buying 20 percent of all new homes built after the war. The results rippled through the rest of the economy; there would be no new depression—just unparalleled prosperity for a generation. The G.I. Bill has been extended several times. Nearly 2.3 million veterans participated in the program during the Korean War era and more than eight million during the Vietnam era.

AN ACT
To provide Federal Government aid for the readjustment in civilian life of returning World War II veterans.
Be it enacted by the Senate and House of Representatives of the United States of America in Congress assembled, That this Act may be cited as the "Servicemen's Readjustment Act of 1944".

SEC. 100. The Veterans' Administration is hereby declared to be an essential war agency and entitled, second only to the War and Navy Departments, to priorities in personnel, equipment, supplies, and material under any laws, Executive orders, and regulations pertaining to priorities, and in appointments of personnel from civil-service registers the Administrator of Veterans' Affairs is hereby granted the same authority and discretion as the War and Navy Departments and the United States Public Health Service: Provided, That the provisions of this section as to priorities for materials shall apply to any State institution to be built for the care or hospitalization of veterans.

SEC. 101. The Administrator of Veterans' Affairs and the Federal Board of Hospitalization are hereby authorized and directed to expedite and complete the construction of additional hospital facilities for war veterans, and to enter into agreements and contracts for the use by or transfer to the Veterans' Administration of suitable Army and Navy hospitals after termination of hostilities in the present war or after such institutions are no longer needed by the armed services; and the Administrator of Veterans Affairs is hereby authorized and directed to establish necessary regional offices, sub- offices, branch offices, contact units, or other subordinate offices in centers of population where there is no Veterans' Administration facility, or where such a facility is not readily available or accessible : Provided, That there is hereby authorized to be appropriated the sum of $500,000,000 for the construction of additional hospital facilities.

SEC. 102. The Administrator of Veterans' Affairs and the Secretary of War and Secretary of the Navy are hereby granted authority to enter into agreements and contracts for the mutual use or exchange of use of hospital and domiciliary facilities, and such supplies, equipment, and material as may be needed to operate properly such facilities, or for the transfer, without reimbursement of appropriations, of facilities, supplies, equipment, or material necessary and proper for authorized care for veterans, except that at no time shall the Administrator of Veterans' Affairs enter into any agreement which will result in a permanent reduction of Veterans' Administration hospital and domiciliary beds below the number now established or approved, plus the estimated number required to meet the load of eligibles under laws administered by the Veterans' Administration, or in any way subordinate or transfer the operation of the Veterans' Administration to any other agency of the Government.

Nothing in the Selective Training and Service Act of 1940, as amended, or any other Act, shall be construed to prevent the transfer or detail of any commissioned, appointed or enlisted personnel from the armed forces to the Veterans Administration subject to agreements between the Secretary of War or the Secretary of the Navy and the Administrator of Veterans' Affairs: Provided, That no such detail shall be made or extend beyond six months after the termination of the war.

SEC.103. The Administrator of Veterans' Affairs shall have authority to place officials and employees designated by him in such Army and Navy installations as may be deemed advisable for the purpose of adjudicating disability claims of, and giving aid and advice to, members of the Army and Navy who are about to be discharged or released from active service.

SEC. 104. No person shall be discharged or released from active duty in the armed forces until his certificate of discharge or release from active duty and final pay, or a substantial portion thereof, are ready for delivery to him or to his next of kin or legal representative; and no person shall be discharged or released from active service on account of disability until and unless he has executed a claim for compensation, pension, or hospitalization, to be filed with the Veterans' Administration or has signed a statement that he has had explained to him the right to file such claim: Provided, That this section shall not preclude immediate transfer to a veterans' facility for necessary hospital care, nor preclude the discharge of any person who refuses to sign such claim or statement: And provided further, That refusal or failure to file a claim shall be without prejudice to any right the veteran may subsequently assert.

Any person entitled to a prosthetic appliance shall be entitled, in addition, to necessary fitting and training, including institutional training, in the use of such appliance, whether in a Service or a Veterans' Administration hospital, or by out-patient treatment, including such service under contract.

SEC. 105. No person in the armed forces shall be required to sign a statement of any nature relating to the origin, incurrence, or aggravation of any disease or injury he may have, and any such statement against his own interest signed at any time, shall be null and void and of no force and effect.