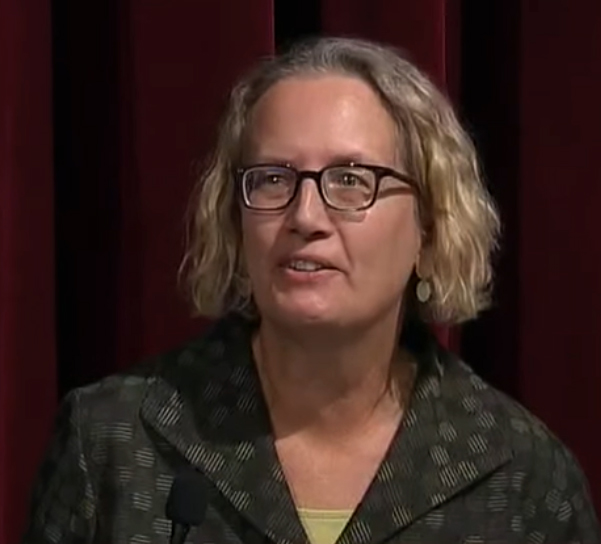 Anne Gardiner Perkins discusses her book on some of the first women students at Yale University during a talk at the National Archives in Washington, DC, October 8, 2019.

WASHINGTON, October 15, 2019 — Decades after the 19th Amendment secured the right to vote for women, Yale University welcomed its first group of 230 undergraduate freshman women in September 1969 for its Class of 1973. Fifty years later, author Anne Gardiner Perkins tells the story of five young women as they navigated those turbulent first years of coeducation at Yale.

Perkins, author of Yale Needs Women: How the First Group of Girls Rewrote the Rules of an Ivy League Giant, discussed her book with visitors in the William G. McGowan Theater at the National Archives Building in Washington, DC, on October 8.

Corinne Porter, curator of the Rightfully Hers: American Women and the Vote exhibit in the Lawrence F. O'Brien Gallery at the National Archives, presented welcoming remarks. Rightfully Hers commemorates the centennial of the 19th Amendment and is open through January 3, 2021.

“Just as diverse women struggled to secure their place among men at the polls, women have fought for inclusion in male-dominated institutions and professions throughout American history,” Porter said. “Yale Needs Women is one story of women’s persistence and courage in the face of ignorant opposition that continues to resonate today.”

At the podium, Perkins shared her pleasure at seeing the Rightfully Hers exhibit this past June, and at discovering a fellow Massachusetts native—Lucy Stone—among the women who fought for suffrage.

“Lucy Stone lived at a time when the vast majority of U.S. colleges still denied entry to women,” Perkins said. “In 1847, she became the first Massachusetts woman ever to be awarded a college degree. Three years later, she organized the first national women’s rights conference in the United State. In 1856, at another women’s rights convention, she stood before the gathered crowd and said: ‘Our demand that Harvard and Yale colleges should admit women, though not yet yielded, only waits for a little more time.’”

“A little more time” proved to be over 100 years, but in 1969 Yale University admitted its first female undergraduate students, followed by Harvard University in 1975.

Yale administrators knew the road to successful coeducation would be difficult, so they sought only the toughest applicants to challenge the centuries-old university’s male cultural traditions. In addition to the group of 230 undergraduate freshman women, Yale also admitted 151 sophomore transfer students for the Class of 1972 and 194 juniors for the Class of 1971. Despite this impressive number of matriculating female students, Yale men outnumbered Yale women by more than 7:1.

With Yale Needs Women being her first book, Perkins said she has often been asked why she decided to write it.

“I had never written a book before,” Perkins said. “The women who go first, the women who speak out, helped shape a better country for all of us. Yet, all too often their stories are lost. I was not going to let that happen to this one.”

Perkins then honored several women in the audience who were among the first class of women undergraduates at Yale, asking them to stand and receive a round of applause.