WASHINGTON, May 1, 2019 — The diary of a “Monuments Man” who wrote the official report on Adolf Hitler's looted art collection and supervised the identification and return of more than five million artistic and cultural items to the countries from which they had been taken, is now part of the holdings of the National Archives. Chairman of the Monuments Men Foundation Robert Edsel (center) signs the Gift of Deed as he donates the personal diary of Monuments Man S. Lane Faison, Jr. to the National Archives in Washington, DC, on April 29, 22019. Accepting the diary on behalf of the National Archives are Archivist of the United States David S. Ferriero (left) and senior archivist and expert on Holocaust-Era Assets records Dr. Greg Bradsher (right). (National Archives photo by Jeff Reed)

The National Archives received custody of the World War II–era diary of S. Lane Faison, where it joins the collection of so-called “Hitler Albums” of looted art that the Monuments Men Foundation previously donated. The Einsatzstab Reichsleiter Rosenberg, a special Nazi task force, created the “Hitler Albums,” which documented the unprecedented and systematic looting of European art by the Nazis.

Faison was a member of the Office of Strategic Services’ (OSS) Art Looting Investigation Unit, and served as part of the Allied Monuments, Fine Arts, and Archives (MFAA) Section, made up of about 350 men and women from 13 countries. They were known as the Monuments Men and had backgrounds as art historians, museum curators, archivists, architects, and members of other related fields. They were older than most soldiers, with an average age of about 40.

Archivist of the United States David S. Ferriero explained that the National Archives holds millions of records created or received by the U.S. Government during and after World War II, relating to the Nazi-era looted cultural assets, including the official records of the Monuments Men.

“Because of Robert [Edsel]’s efforts, there is an increased interest in this subject,” Ferriero said. “People all around the world know more about the heroic acts to protect, recover, and return priceless artifacts damaged in World War II or looted by the Nazis. We are grateful to . . . the Monuments Men Foundation for their continuing work to recover cultural and historic treasures and documents that were stolen during the Second World War.”

The story of the MFAA, given the task of finding and saving pieces of art and other culturally important items before the Nazis could steal or destroy them during World War II, was brought to the big screen by George Clooney in 2014 with “The Monuments Men.”

Faison’s diary, about 100 handwritten pages, documents his time as Director of the Munich Central Collecting Point from December 1950 to September 1951. During this time, Faison oversaw the disposition of the remaining looted cultural property in the Collecting Point, and turned over its operations to the newly-formed German government. In his final report to the OSS, Faison unsuccessfully advocated for the prosecution of Nazi art looters at the Nuremberg tribunal.

Edsel lauded the National Archives’ role in helping to share the history of this chapter in world history.

“Like pieces of a jigsaw puzzle, these [primary documents] paint a more complete picture of our cultural and shared history,” Edsel added.

“Many of the records we have accumulated over the years . . . the documents we think of immense historical importance, National Archives is the home to those, where these documents can be seen and used by the most number of people,” Edsel added. “It’s not a storage facility. It’s not a place that documents sit and gather dust. It’s a working facility that welcomes people who are interested . . . and curious about the documents of our shared cultural history. They are used every day. That’s what’s so exciting about this!”

Edsel spoke of Hitler’s “obsession” with collecting art from a young age and the role the “Hitler Albums” played in his “showcasing of his collections he was amassing.”

Edsel also recognized Dr. Greg Bradsher, a senior archivist at the National Archives, for the expertise he has developed over the past couple of decades as the agency’s resident expert on Holocaust-Era Assets records. Bradsher, who had first access to the document at the Archives, shared an overview of the diary’s contents.

“The diary has something for everyone,” Bradsher said. “It has information about artists, art works, and art collections. The diary makes reference to Germans associated with art looting, including Maria Deitrich, who sold more pieces of art to Hitler than anyone. It tells of [Faison’s] dealings with Americans regarding restitution matters as well as dealings with German officials and German art experts. I am sure anyone who takes the time to look through it carefully will find useful information for their research.”

The diary has been accessioned into the holdings at the National Archives at College Park, Maryland and is available for research at that facility. The “Hitler Albums” are also available there. 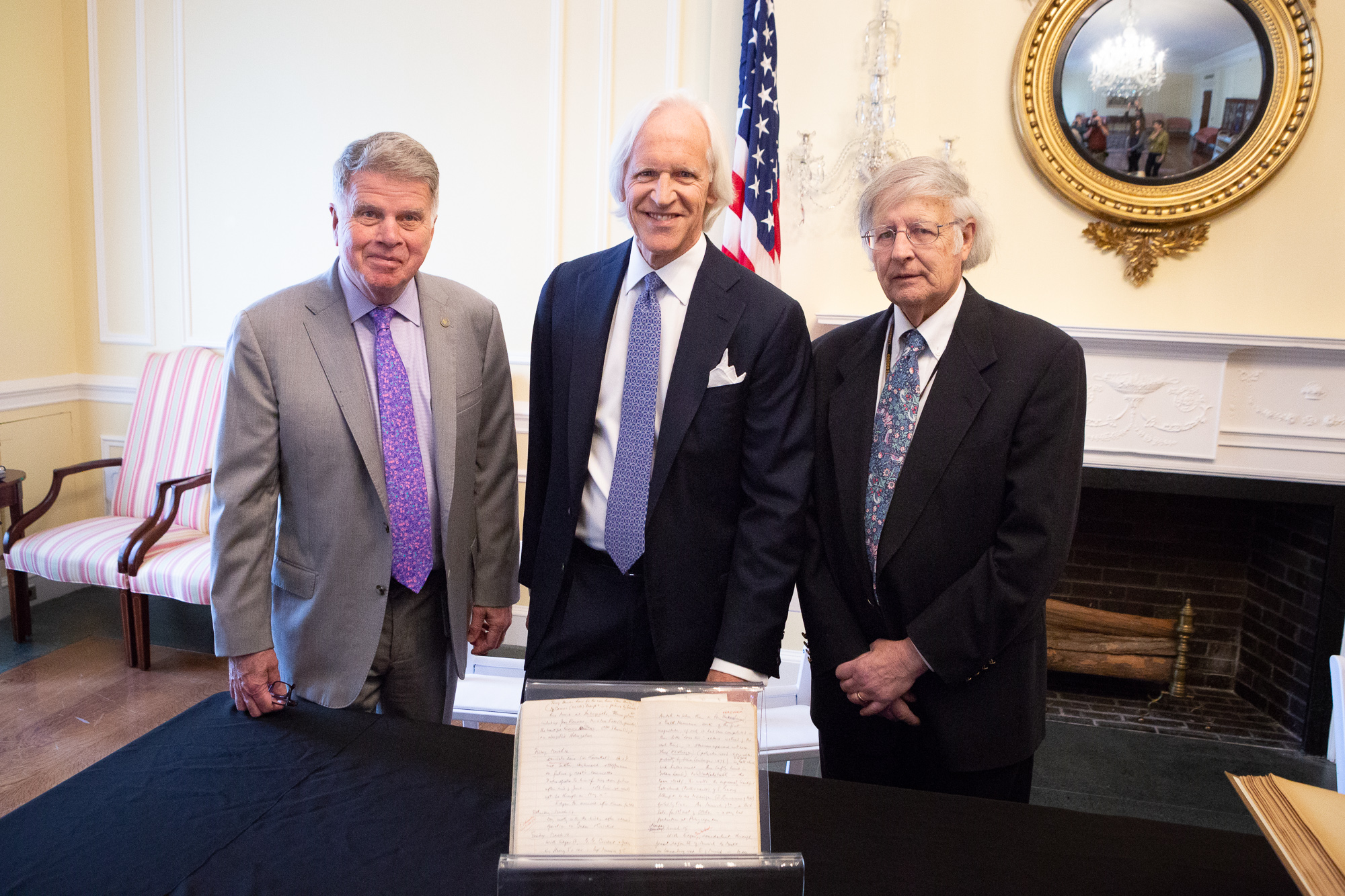 The personal diary of Monuments Man S. Lane Faison, Jr. was on display during a ceremony when Monuments Men Foundation Chair Robert Edsel donated it to the National Archives in Washington, DC, on April 29, 2019. (National Archives photo by Jeff Reed)

The National Archives holds the collection of so-called “Hitler Albums” of looted art that the Monuments Men Foundation previously donated. The special Nazi task force, the Einsatzstab Reichsleiter Rosenberg, created the so-called “Hitler Albums,” which documented the unprecedented and systematic looting of European art by the Nazis. (National Archives photo by Jeff Reed)

The personal diary of Monuments Man S. Lane Faison, Jr. was on display during a ceremony when Monuments Men Foundation Chair Robert Edsel donated it to the National Archives in Washington, DC, on April 29, 2019. (National Archives photo by Jeff Reed)