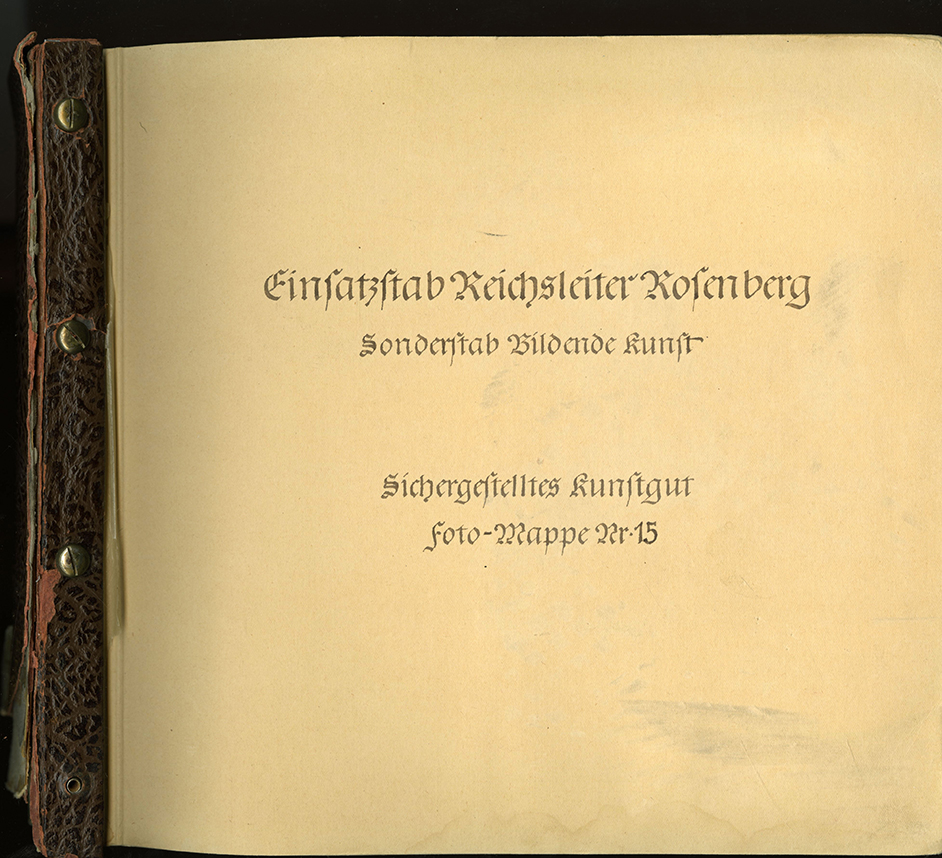 The ERR and the Thirty-Nine Albums

For information on the ERR, see Nazi Conspiracy and Aggression, vol. I, chapter XIV, The Plunder of Art Treasures, Part 1: The Einatzstab Rosenberg.

The ERR, headed by Alfred Rosenberg, was the primary German organization charged with seizing Jewish and other cultural properties in occupied countries during World War II. During the latter part of the war, the ERR deposited much of its looted cultural property and its records in various locations in Germany and Austria. Most of these items were recovered by the United States Army during April and May 1945. The bulk of the items were recovered at Alt Aussee in Austria and at Neuschwanstein/Fussen in Bavaria.

Among the items recovered at those locations and at Berchtesgaden were photographic albums depicting cultural works that the ERR had seized. One particular collection of albums, consisting of 39 leather-bound albums, was recovered at the castle at Neuschwanstein and transported to the United States Army-operated Munich Central Collecting Point to be used by the Monuments, Fine Art, and Archives staff in identifying and restituting looted cultural property. During the summer various other collections of photographic albums created by the ERR were also transferred to the Munich Central Collecting Point.

During the summer of 1945, members of the Office of Strategic Services Art Looting Investigation Unit (ALIU) interrogated various ERR members about their activities and records. The ALIU ascertained that the recovered 39-album collection was part of nearly 100 albums that the ERR had prepared for Adolf Hitler to view in order to show him the extent of the ERR's work.

For records of the ALIU, see National Archives Microfilm Publication M1782, the documents of which are digitized and available online.

A review of the 39 albums showed that they appear to be from two different series of albums, given the album titles "Foto Mappe" and "Bilder Mappe." The albums are very similar except for the titles and numbers, which appear to be written by different people. Some albums do not have numbers and there are gaps in the numbering of the albums. Given the high numbers of 44 in one series and 37 in the other, it appears that there were originally at least 81 albums in total, which is close to the nearly 100 albums described by the ERR staff to the ALIU.

For an explanation of the file designations used by the staff, see Nazi Conspiracy and Aggression, vol. I, Section V of the Preface, pp. xiv-xv.

During the early fall of 1945, the Munich Central Collecting Point turned over the 39 volumes to the staff of the Office of the Chief of Counsel for the Prosecution of Axis Criminality for use in the forthcoming International Military Tribunal at Nuremberg. At Nuremberg, the staff placed the albums and related correspondence into a series of records entitled "United States Evidence Files, 1945-1946" (NARA Online Identifier 305264) and designated them as file 2522-PS. The albums were externally numbered consecutively, 1 to 39, while continuing to contain original numbers internally, with gaps.

The Thirty-Nine Albums at Nuremberg

The albums were exhibited as evidence at the International Military Tribunal at Nuremberg (read excerpts of the trial transcript online and see video below).

The Tribunal concluded its work in the fall of 1945, and most of its records, including the 39 albums, were transferred to the National Archives in 1947.

Donation of additional ERR albums by the Monuments Men Foundation 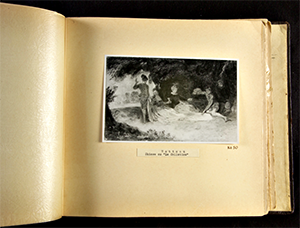 Most album pages, such as this one depicting a Watteau sketch, include a photograph, brief description, and ERR-assigned catalog number. National Archives Identifer 4696837.

After World War II American servicemen recovered more ERR albums and brought them back to the United States. Through the efforts of the Monuments Men Foundation four of the albums were recovered and three of them donated to the National Archives in 2007 and 2012. A fourth album is scheduled to be donated in May 2014.