WASHINGTON, March 20, 2019 — Fred McFeely Rogers, more fondly known as Mr. Rogers by several generations of children and their parents, became an American icon through his long-running television show. Born on this day in 1928, in Latrobe, Pennsylvania, Rogers was a pioneer in children’s programming for more than 50 years. He worked on several other children’s television shows prior to his most famous—Mister Rogers’ Neighborhood—which catapulted him to legendary status. 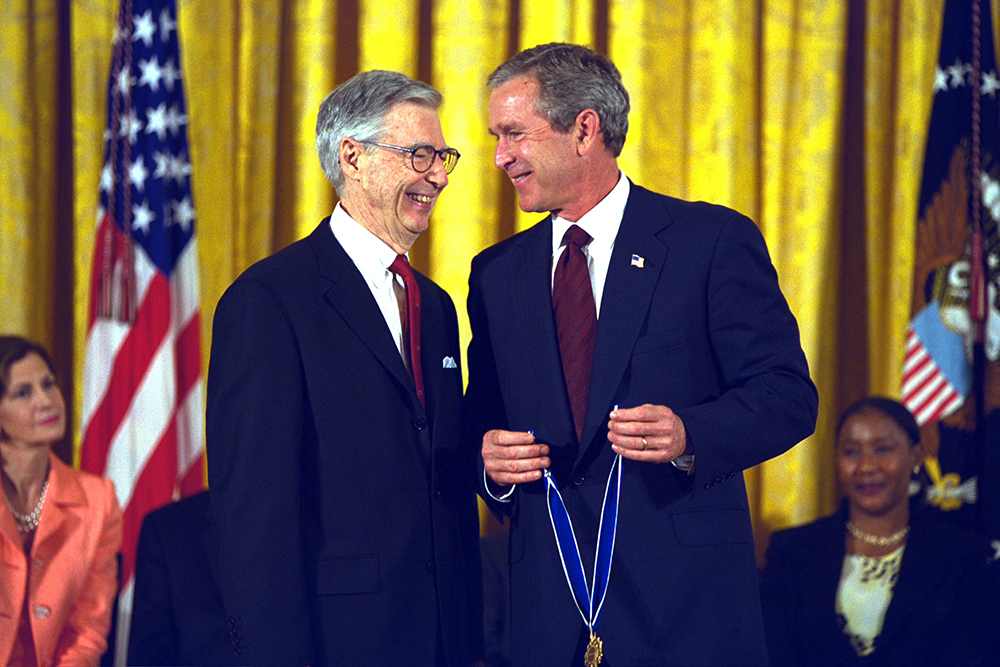 Fred Rogers was awarded the Presidential Medal of Freedom by President George W. Bush on July 9, 2002, for his service to the nation and dedication to the education of children.(National Archives Identifier 7431400)

Rogers registered for the draft in Greensburg, Pennsylvania, in 1948. When he registered, Rogers was just 20 years old. He was classified as “1A,” meaning he was available for military service. However, his status was changed to unqualified for military service following an Armed Forces physical on October 12, 1950. His World War II draft card and a Selective Service roster, which lists Rogers as number 122, can be found in the image gallery below this article.

Although Rogers did not serve his country in the armed services, he served through his dedication to its children and their education and emotional growth. Rogers was the creator, composer, producer, head writer, and host of the preschool television series that ran for 895 episodes from 1968 to 2001. Viewers became accustomed to his zipped cardigan sweaters, sneakers, and the “Won’t You Be My Neighbor” song that he sang at the start of each episode.

On July 9, 2002, President George W. Bush awarded Rogers the Presidential Medal of Freedom for this service to the nation and contributions to children’s education. Over his lifetime, Rogers received 40 honorary degrees, four Emmy Awards, and a Peabody Award. He was inducted into the Television Hall of Fame in 1999 and was recognized in two congressional resolutions in 2003. Rogers passed away on February 27, 2003.

Following Rogers' death, the U.S. House of Representatives unanimously passed Resolution 111 honoring Rogers for “his legendary service to the improvement of the lives of children, his steadfast commitment to demonstrating the power of compassion, and his dedication to spreading kindness through example.” 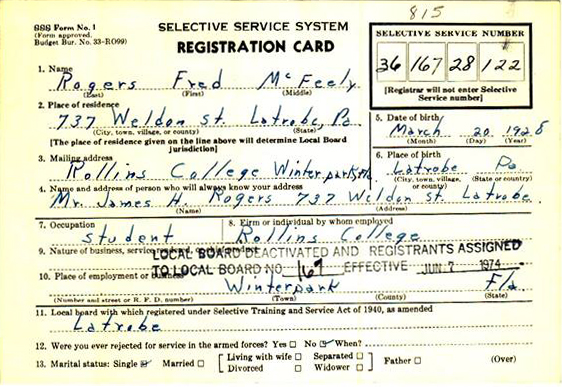 The first page of a Selective Service roster lists Fred McFeely Rogers as number 122. When he registered for the military draft in Greensburg, Pennsylvania, Rogers was just 20 years old. (National Archives at St. Louis image)