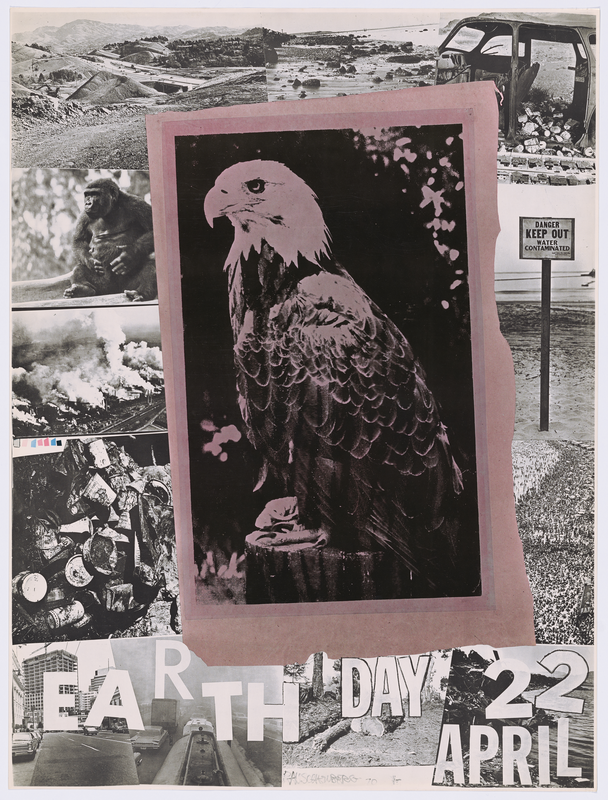 For the 50th anniversary of Earth Day, the National Archives is featuring this poster by artist Robert Rauschenberg. (National Archives, Records of the U.S. Information Agency)

WASHINGTON, April 22, 2020 — For the inaugural Earth Day 50 years ago, artist Robert Rauschenberg designed a poster built around the image of a bald eagle. Flanking the U.S. national bird, however, was a collection of photographs: endangered animals, deforestation, and land, water, and air pollution. A stark sign on what looks like an open plain says “Danger: KEEP OUT. Water contaminated.”

“It’s certainly a powerful image, and people’s feelings about environmental issues are also pretty powerful,” said Porter. “We hope that people who view the record and the exhibit online find it meaningful as we reflect on the 50 years since the first Earth Day.”

Rauschenberg, a painter and graphic artist, originally designed his iconic poster for the American Environment Foundation.

“He was a really well known artist, so that was exciting,” said Porter. “We have some notable artists who worked for or produced for the Federal Government, but I wasn’t expecting to see this.”

More than 20 million Americans participated in the first Earth Day on April 22, 1970.

The U.S. Information Agency—part of the U.S. State Department’s public diplomacy mechanism—would create exhibitions intended for an international audience. The agency made the reproduction of the original work in 1993; the National Archives subsequently became the custodian of the poster’s reproduction.

With the National Archives Museum closed in response to the coronavirus, this Featured Document is displayed online only at this time. The public can read more about this and other National Archives resources related to Environmental Studies on Archives.gov. For more environmental history, explore the past National Archives exhibition, Searching for the Seventies: The DOCUMERICA Photography Project.