The Four Continents: What to do with ‘Problematic’ Public Art 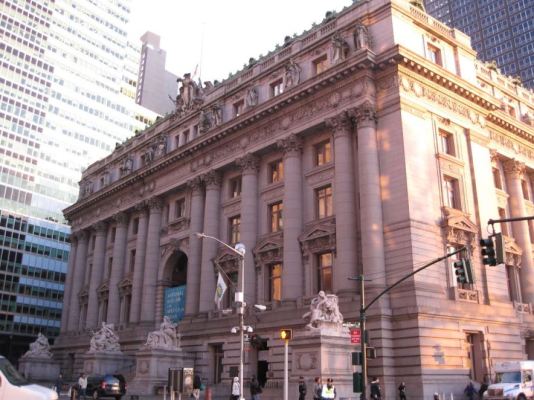 WASHINGTON, DC, November 17, 2020—Flanking the entrance to the U.S. Custom House in Lower Manhattan, which houses the National Archives and Records Administration’s New York City site, are four statues representing Asia, America, Europe, and Africa. The massive sculptures, examples of early 20th-century public art, loom large in front of the Beaux-Arts architecture and were designed to enhance the importance of this federal building with the ideal that the United States was leading the world with the “torch of progress,” said Harold Holzer, Director of the Roosevelt House Public Policy Institute at Hunter College.

The statues created by Daniel Chester French under a federal contract, however, are complicated in a 21st-century social context. The sculpted woman representing “Asia,” for example, has a Buddha figure in her lap “to portray religious reverence, while hinting at an insularity that stultifies progress and access,” Holzer said. The Africa sculpture—“the most problematic of the statues,” Holzer said—looks unfinished, compared to Europe and America; a journalist visiting French during the creative process remembered the sculptor calling Africa "clearly the slumbering continent."

“French's work reflected a distinct point of view, shared by many of his Gilded Age contemporaries, about America's place in the world, and the other continents' place in the world. I think they also reflected the views of the sculptor's political hero, Theodore Roosevelt: progressive, as they told themselves, but also, kind of undisguisedly imperialistic. And where racial and ethnic sensitivity was concerned, not what we today would call, ‘woke,’” Holzer said.

The conversation follows several months of national discussion and protest, largely regarding Civil War–era statues, and “comes at a moment in our national history when we are reckoning with the ways in which monuments hold public space, and the ideas and ideologies and values that they bring with them into those spaces,” Baron said.

As a tenant of the Custom House, which is operated by the General Services Administration, the National Archives values the discussion around the issue of presenting, preserving, and contextualizing public art. This conversation, as explained during the event, is part of a larger effort to address current conversations around problematic works and properties within the records of the federal government in the National Archives.

“The National Archives encourages the public to use our records to study the past and learn from it, and examine our history, both good and bad,” said Archivist of the United States David S. Ferriero during the livestream.

“We have agency records, we have the building records. And we're in that space, so it makes sense that we would talk about it,” said Dorothy Dougherty, Public Program director at the National Archives at New York. “Records of the U.S. Custom Service and for the New York Custom House are available in our online catalog. Our education staff also created links to primary sources about the building, in addition to several other lessons about public sculpture, since educators may address the current conversations in their classroom.”

There is currently no discussion to remove, cover, or otherwise obscure the artwork. Holzer suggested offering more context to the public, perhaps in the form of an information kiosk nearby.

“The four sculptures that we're talking about, ‘The Continents,’ very much reflected the popular, the common, the known understanding of people of the United States at that time. Of course, to our eye, that can be rather jolting, when we look at them carefully, and we notice that certainly the depictions of Africa and Asia are—well, they’re racist,” said Kevin Gover, Director of the National Museum of the American Indian, which is also a tenant of the Custom House.

“And so, what to do with public art of this type is the question that many, many communities are grappling with. And there are a number of different approaches to it, so it’s good that you would convene to think and listen and talk about these things,” he added.

The program was the first of a two-part series. The second part of the discussion, featuring Brent Leggs, Executive Director of the African American Cultural Heritage Action Fund, and Michele Cohen, curator for the Architect of the Capitol, is scheduled for December 7, 6–7 p.m. (Eastern Time).

This program is presented in partnership with the current stewards of the building, the U.S. General Services Administration, and tenants of the building: the Smithsonian’s National Museum of the American Indian, NYC, and the National Archives at New York City, as well as Chesterwood—A site of the National Trust for Historic Preservation.