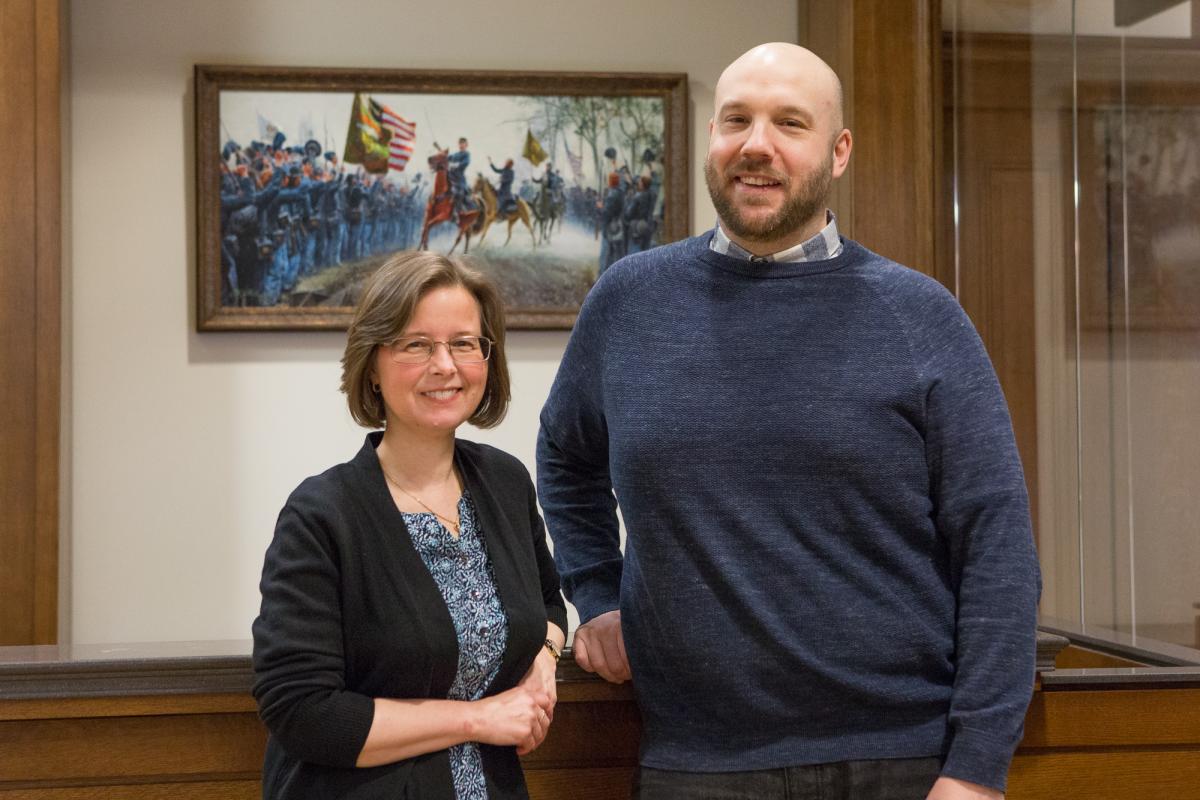 Damian Shiels never set foot in a National Archives research room, or even on American soil for that matter, while doing research for his first book, Irish in the American Civil War. He conducted all of his fieldwork online.

Jackie Budell, an archives specialist in textual processing in the National Archives‚Äô Research Services Division, said this approach is the way of the future. Traditionally research has been done with researchers going directly to the paper files, Budell said;¬†but with the digital projects, researchers now have the information available at their fingertips from anywhere throughout the world.

A celebrated conflict archaeologist, historian, and author, Shiels was able to use the National Archives‚Äô digitized holdings, focusing his research on the widows and dependents pension application files of the American Civil War. These records often include not only letters and private correspondence between family members, but accounts of their lives in their homeland‚ÄĒin this case, Ireland‚ÄĒand in their new country, America.

Shiels said he used surnames as a primary indicator, examining each of the digitized files associated with the Irish to retrieve social information. His pursuit of the stories of fellow Irishmen led him to the National Archives to find out more about what happened to those who left Ireland‚Äôs shores in search of a new destiny.

‚ÄúMore Irishmen fought in the American Civil War than any other conflict outside of World War I,‚ÄĚ Shiels said. As a former curator working in the military history collections of the National Museum of Ireland, he said he initially set out to find out more about his countrymen and their role in the conflict.¬†He added that he was very aware that just because they left Ireland‚Äôs shores did not mean their stories ended there. After conducting his research, Shiels said he now has a secondary goal of raising awareness throughout Ireland about the significant number of Irishmen who fought in the American Civil War: approximately 180,000 for the Union and about 20,000 for the Confederacy.

Each of the 35 individual stories in Shiels‚Äô latest book, The Forgotten Irish, uses at least one digitized file from the National Archives as its base and builds on the family story both through other online resources and historical documentation.

While conducting his research, Shiels published his findings in a blog on his website, irishamericancivilwar.com. Budell, who coordinated the Digital Partnership Project at the National Archives, discovered the site while conducting an online search to collect data on who was using National Archives¬†digital images to conduct research and how the holdings were being used.¬†She said she was taken aback at Shiels's great following and surprised when she read that the National Archives and the digital records there contributed to his research. ¬†

‚ÄúHe was using National Archives holdings and specifically the pension files from my project!‚ÄĚ Budell said.¬†She contacted the researcher via email, and the two developed a professional relationship in which the specialist was able to help the historian understand the files and inspire his confidence in the digitized surrogates of the originals.

‚ÄúI was amazed and pleased to find Civil War pension files were his primary source material,‚ÄĚ she added. ¬†¬†¬†

With respect to the NARA holdings, Shiels touted the invaluable resource he had at his fingertips.

‚ÄúThe value of NARA holdings with respect to non-U.S. based history‚ÄĒwhat things like the pension files can tell us about life in Ireland, Germany, Canada, or the UK‚ÄĒis of great importance, and not something that has been recognized by historians in Europe,‚ÄĚ he said.

"There‚Äôs a growing value that documents‚ÄĒperhaps initially digitized with a view to genealogical applications‚ÄĒcan have for historians outside the jurisdiction in which they are located, allowing for new transnational perspectives on the research,‚ÄĚ Shiels noted.

Budell said it is gratifying to see concrete examples of the way the National Archives helps historians tell America‚Äôs story to an international audience.

‚ÄúResearch like Damian's gives our work at the National Archives real purpose,‚ÄĚ Budell added. ‚ÄúI can directly see the impact that our efforts in Digital Projects is having to create access to our holdings around the world.¬†As a result, social history in countries¬†like Ireland is literally being rewritten.¬† And since we are a nation largely of immigrants, NARA records are documenting our two nations' shared history.‚ÄĚ

Budell noted that National Archives¬†holdings offer unparalleled insight into our nation‚Äôs history.¬†For example, records found in the Civil War and Later Pension Application Files, and specifically the Widows Certificate (WC) series, offer valuable information on the social histories of soldiers, their families, and life in 19th-century America. She added that these same files also offer untapped information about immigrants and their role in American society, including conflicts such as the American Civil War.

‚ÄúWe are a relatively young nation, but our holdings document Irish social history with information literally available nowhere else on Earth,‚ÄĚ Budell stated.

Shiels added that since much of Ireland‚Äôs own 19th-century records were lost during their country's civil war in the 1920s, the National Archives‚Äô files actually provide more information about Irish social history than any other source in the world. 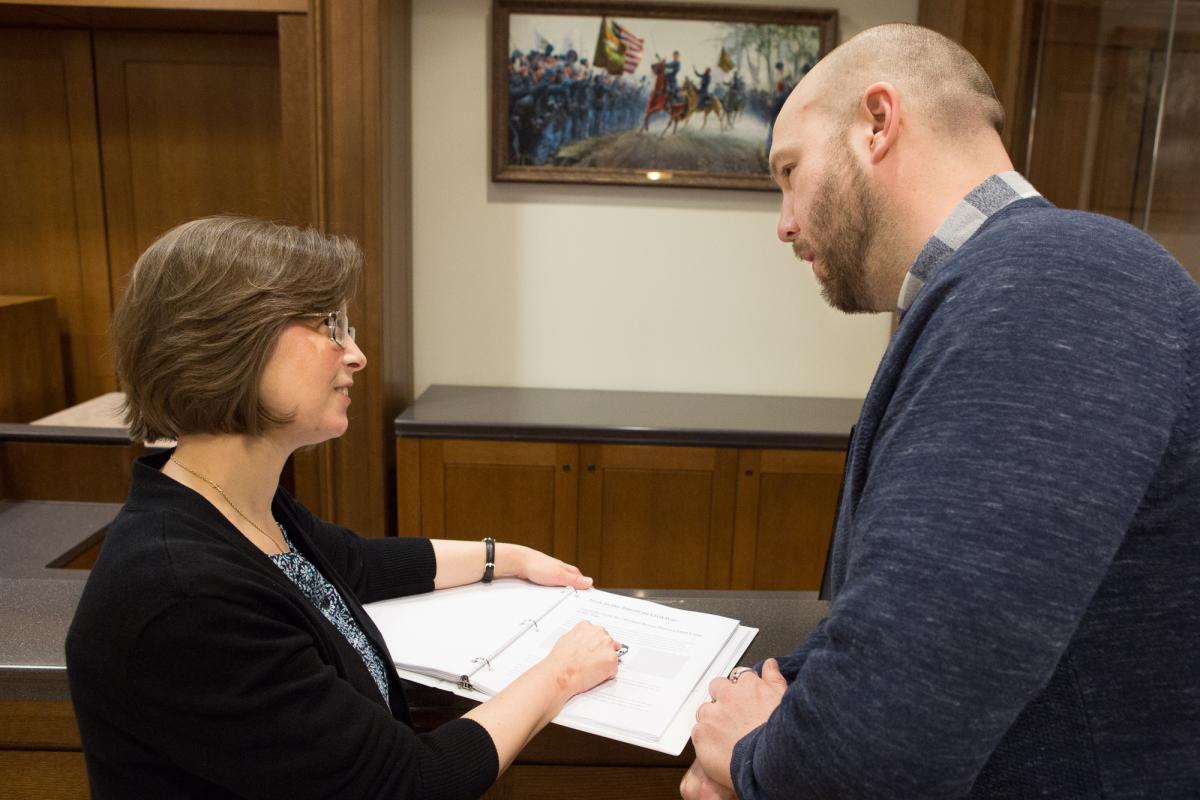 Shiels publicly recognized the assistance Budell contributed to his latest project. In the acknowledgement section of his latest book, The Forgotten Irish, he wrote:

‚ÄúI had the great privilege of meeting some of the NARA team whose hard work in digitizing the pension files allowed me to explore these Irish stories. They include Archives Specialist Jackie Budell, who coordinates the project. Over the years, Jackie has been a constant source of encouragement, advice, support and friendship, for which I am extremely grateful. More than any other, she deserves a special note of thanks for helping this book come to fruition.‚ÄĚ

In an ongoing effort to make valuable holdings such as these available to researchers like Shiels around the globe, the National Archives has undertaken the process of digitizing as many of its holdings as possible. Budell stated that preparing 19th-century records for digitization is an extremely laborious and time-consuming process.¬†To date, the National Archives has partnered to digitize 148,100 complete WC pension files online.

Beginning in 2007, digitization efforts were put in place at NARA for multiple stakeholders, including genealogists, historians, sociologists, even medical historians, who often use Civil War records and the valuable information contained within to document trends in illnesses and deaths.

The National Archives takes great care in painstakingly making sure all files are thorough and authentic, Budell said.

‚ÄúWe are able to reassure researchers that quality assurance measures are firmly in place, meaning that the digital surrogate images used online are complete and accurate,‚ÄĚ Budell continued.

‚ÄúThis is of great importance to those accessing our records through digital surrogates online around the world. That researcher should be completely confident that he is getting exactly what he would see if he were in our Washington, DC, research room and holding the original paper record himself,‚ÄĚ she added.

Shiels was part of a program at the National Archives‚Äô William G. McGowan Theater on Thursday, March 16, titled ‚ÄúThe Forgotten Irish: Irish Emigrant Experiences in America.‚ÄĚ He discussed his newest book and the stories of 35 Irish families whose lives portray the nature of the Irish emigrant experience. Michael Hussey, a National Archives archivist and historian, and David T. Gleeson, professor of American history at Northumbria University and author of The Green and the Gray: The Irish in the Confederate States of America, co-moderated the discussion and audience Q&A. A book signing followed the discussion. A rebroadcast of the March 16 event is posted on the YouTube video above.¬†¬†

To learn more about the digitization project that Shiels used in his research, check out the Civil War Widows‚Äô Pension Digitization Project video on the National Archives‚Äô YouTube channel. 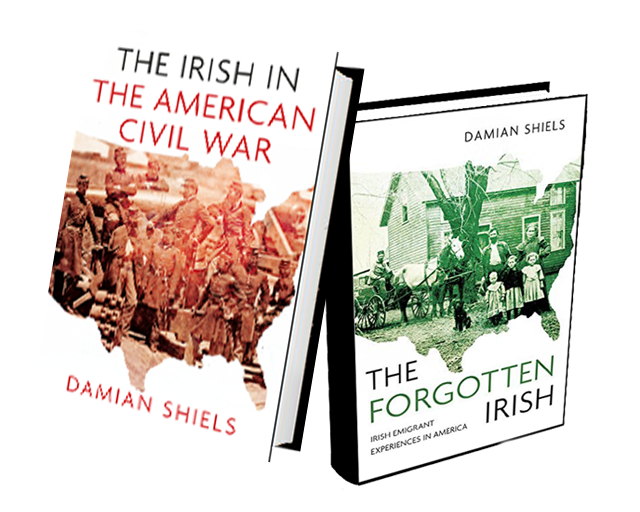