Author Highlights Roles of ‘First Ladies in a New Era’

WASHINGTON, December 17, 2019 — Historian Tammy R. Vigil provided further insight into the office of the First Lady of the United States in the context of its two most recent occupants.  Although their husbands represent different political agendas, Vigil highlighted the parallels between Michelle Obama and Melania Trump as women who occupy a critical role that has helped shaped the United States. 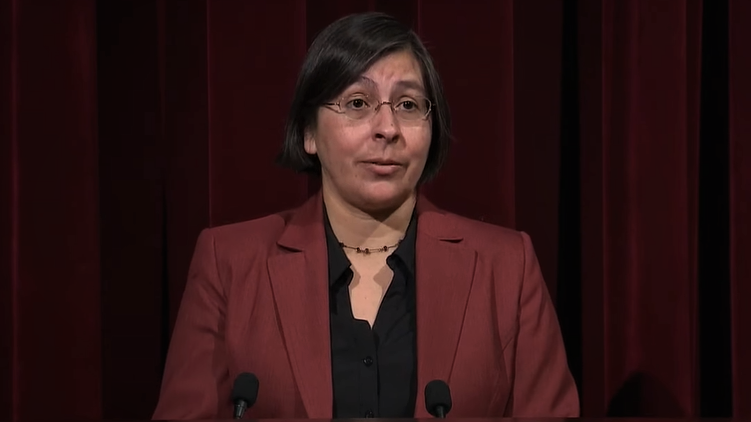 Vigil spoke about her book Melania and Michelle: First Ladies in a New Era on December 13, 2019, in the William G. McGowan Theater at the National Archives Building in Washington, DC. The book discussion is part of a series of programs related to the Rightfully Hers: American Women and the Vote exhibit, currently showing at the National Archives Museum.

While neither Mrs. Obama nor Mrs. Trump sought the role of First Lady, Vigil said each molded her term not only to suit their personality and interests but also to advance their husbands’ policies and objectives.

“The First Lady has long been a figure of public fascination,” Archivist of the United States David S. Ferriero said during his welcome. “She holds no official government office and has assumed the role not through election but through her connection to the President. Even though they have not actively sought their very public roles, they face high expectations from the public at large.”

Vigil explained how her book aims to increase knowledge about the lives of First Ladies and the role they play in the White House.

“Melania and Michelle enhances our understanding of the two most recent White House matrons while also reconsidering the ways we evaluate the women we've all come to call the First Lady of the United States,” Vigil said. “It's important to move beyond simple partisan and personal comparisons if we really want to expand our understanding of these women and of the challenges that any woman faces when she assumes the mantle of the First Lady of the United States.”

Vigil said that both Michelle Obama and Melania Trump were raised in economically modest environments, both worked hard and made sacrifices to pursue competitive careers, and both women waited until after age 30 to have their families. Vigil further explained that “most people who compare these women focus on their personalities and their public activity to underscore their differences, rather than acknowledge their similarities.”

However, Vigil also said that all First Ladies have faced challenges in navigating their role in the Presidency, beginning with the nation’s founding.

“America has had an uncertain and often awkward relationship with First Ladies since Martha Washington arrived in New York City—then the seat of the Federal Government—a few months after her husband George was inaugurated as the first President of the United States,” Vigil said. “[First Ladyship] is not an official constitutionally prescribed position. . . . [T]he public, the press, and even the Presidential spouses themselves have struggled to determine what the role and expectations of a First Lady should be.”

Vigil had previously visited the National Archives in June this past year to discuss her book Moms in Chief, which, she explained, explores the depiction of spouses of Presidential nominees from 1992 to 2016.

The Rightfully Hers: American Women and the Vote exhibit is on display in the Lawrence F. O’Brien Gallery at the National Archives Museum in Washington, DC, through January 3, 2021.