WASHINGTON, December 13, 2018 – For some cast and crew members of the Broadway hit musical Miss Saigon, their recent visit to the National Archives exhibit “Remembering Vietnam” transformed the way they share and perform their story on stage.

The troupe toured the National Archives on opening day of their stint at the John F. Kennedy Center for the Performing Arts in Washington, DC, getting a first-hand look at historic documents from the Vietnam era. 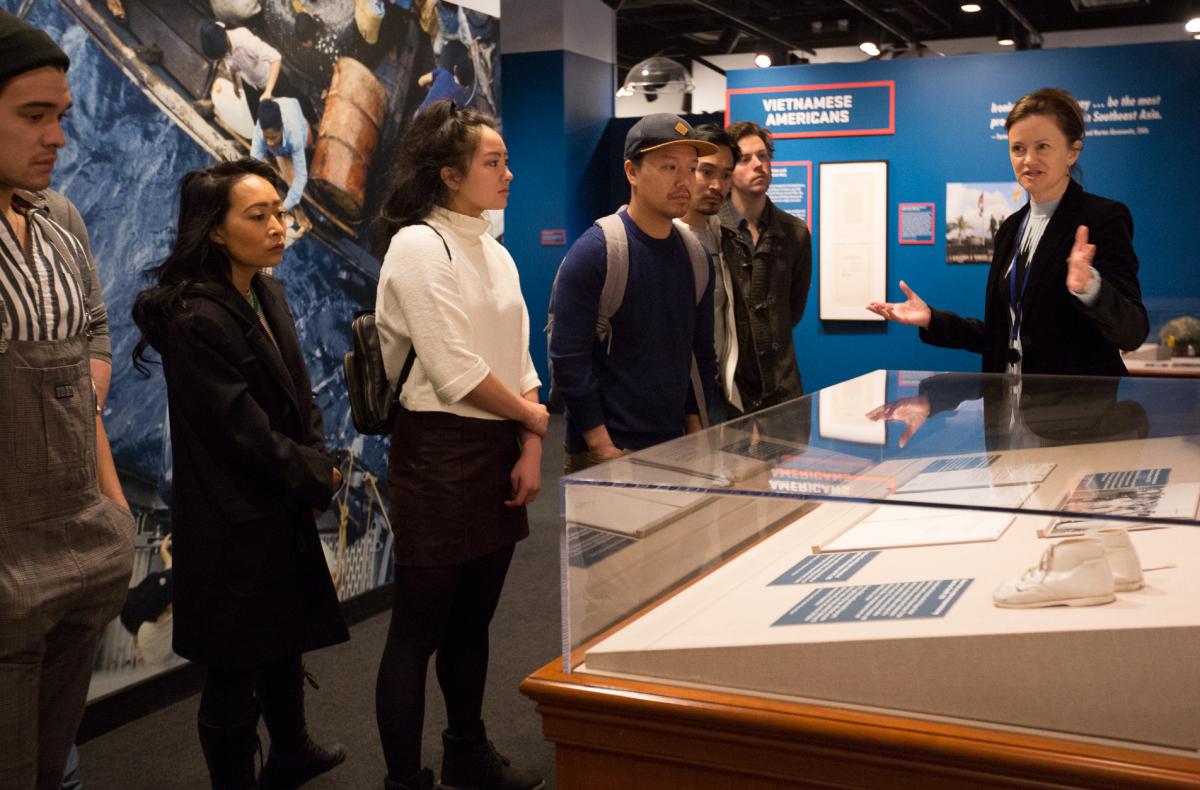 Exhibit Curator Alice Kamps shares the history of documents on display in the "Remembering Vietnam" exhibit in Washington, DC, with cast members of the Miss Saigon ensemble. (National Archives photo by Jeff Reed)

Resident Director Ryan Emmons shared how the visit offered him a new perspective on the war and a “detailed, historical context” for the show.

“I am feeling a bit overwhelmed by this feeling of how much I didn’t know about the Vietnam War and how few conversations I had growing up about [it],” Emmons said, “and just how complex it is . . . [the] many different nuances, details, and sides there are to that story. So this exhibit—seeing the actual documents, records, and letters—helped solidify that in a very real place for me.

“Something like this,” Emmons added, “makes the performances move beyond an idea and roots it to a reality of actual people, places, and things that have happened.”

Emmons shared how pre-performance preparations included studying documentaries and source text with the cast during the first week of rehearsals to capture the essence of the story.

“I traveled around with a box of books, documents, and pictures that I showed the actors of different scenes from that time,” Emmons said. “This is so much better than that little box.“

Exhibits information specialist and curator of the exhibit Alice Kamps offered the group a personalized tour and shared much of the history and stories behind the documents and displays throughout the exhibit. The performers also visited the National Archives Rotunda to view the Charters of Freedom—our nation’s founding documents: the Declaration of Independence, the Constitution, and the Bill of Rights.

Several cast members likened the multiple viewpoints of the war expressed within the exhibit to the unbiased story they aim to tell on stage each evening.

“It’s just very full circle for me,” said ensemble cast member Jackie Nguyen. “Being able to witness this entire exhibit about the history of this war and [the fact] that it doesn’t [tell] a particular side . . . our show really tries to do this. We really want audiences to come in and witness a piece of history. This exhibit does this really well.”

Cast member Eymard Cabling agreed, adding “In my history books I was only taught certain aspects of the Vietnam War. Just seeing this exhibit . . . gives me all aspects from an unbiased perspective—kind of an all encompassing view of why, when and how the war took place.”

Cabling shared that this wasn’t his first visit to the exhibition. “I came here last year when the exhibit opened,” he said, “and I learn new things every time I come, especially the fact that there are more sides to a story than just one. Every detail teaches me more about how to perform my character . . . and how to make it . . . as truthful to the story as I can be. I’m looking at it now with so much more respect and diligence.”

Miss Saigon is the story of a young Vietnamese woman named Kim who is orphaned by war and forced to work in a bar run by a notorious character known as the Engineer. There she meets and falls in love with an American G.I. named Chris, but they are torn apart by the fall of Saigon. For three years, Kim goes on an epic journey of survival to find her way back to Chris, who has no idea he's fathered a son. The show runs at the Kennedy Center in Washington, DC, December 12, 2018, through January 13, 2019. 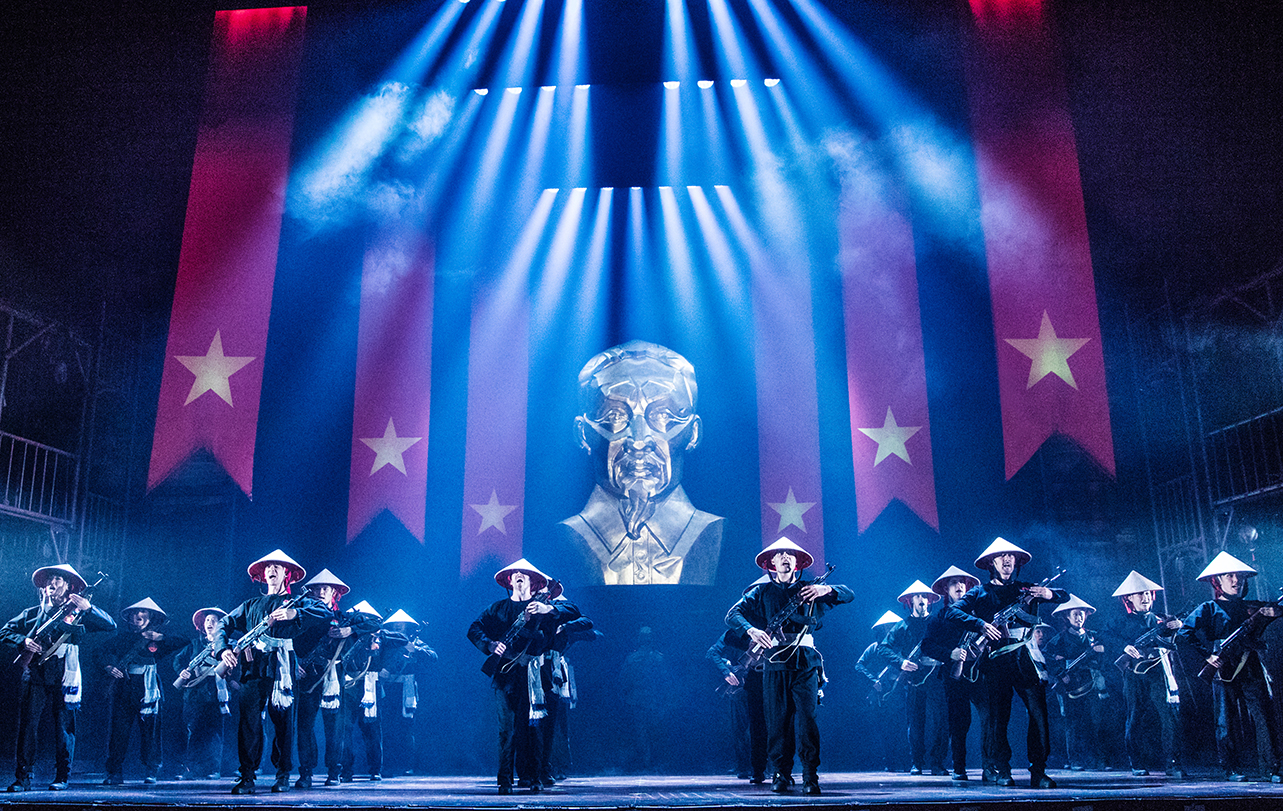 The Broadway musical Miss Saigon opens in Washington, DC, at the Kennedy Center. The cast recently toured the "Remembering Vietnam" exhibit at the National Archives Museum in Washington, DC. (Photo by Matthew Murphy and Johan Persson)

The Broadway musical Miss Saigon opens in Washington, DC, at the Kennedy Center. The cast recently toured the "Remembering Vietnam" exhibit at the National Archives Museum in Washington, DC. (Photo by Matthew Murphy and Johan Persson)

The Broadway musical Miss Saigon opens in Washington, DC, at the Kennedy Center. The cast recently toured the "Remembering Vietnam" exhibit at the National Archives Museum in Washington, DC. (Photo by Matthew Murphy)