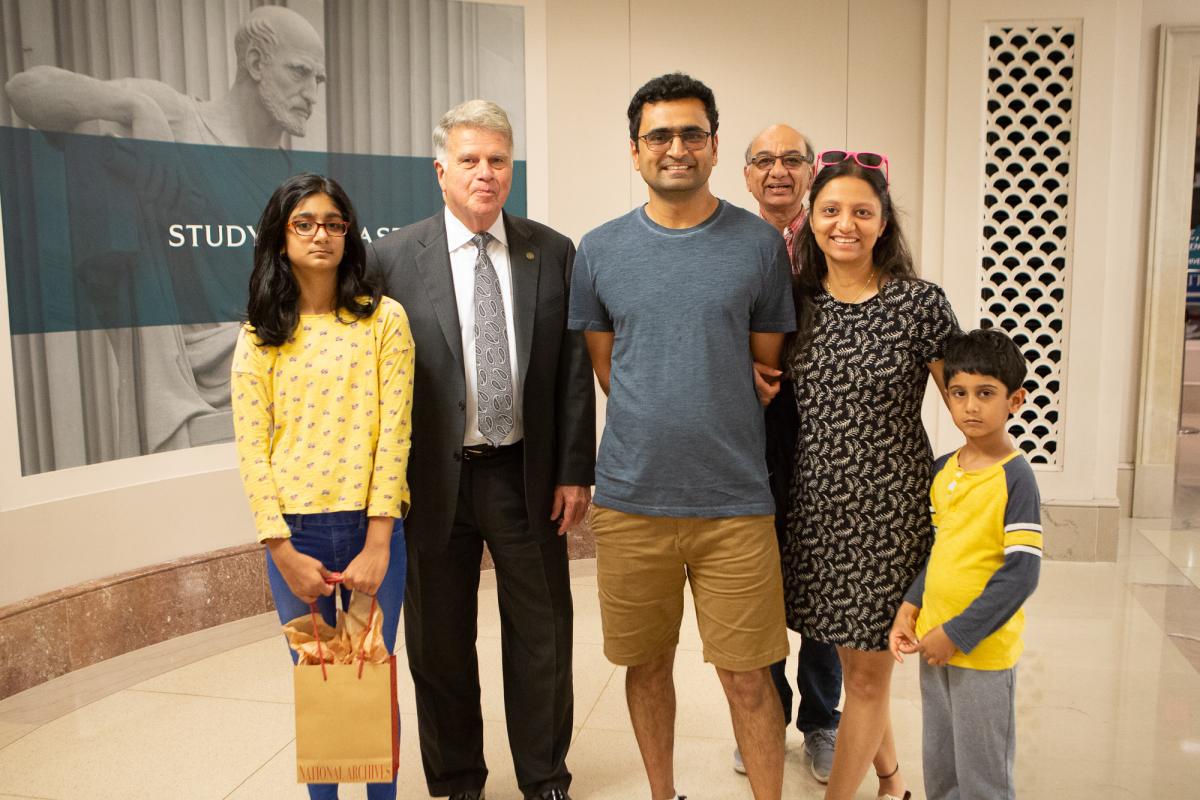 WASHINGTON, August 19, 2019 — The National Archives Museum welcomed its one millionth visitor of 2019 on Friday, August 16.

"While every one of our visitors is special, I always look forward to welcoming the one millionth visitor each year," said Archivist of the United States David S. Ferriero. "Every day I get to wander through the museum and listen in as visitors from across the country and around the world experience the story of America through our records. While we recognize one person and family each year, we are recognizing and thanking all of our visitors."

This year's millionth museum visitor was Saumya Raval, an 11-year-old sixth grader at Warwick Elementary School in Fremont, California. This was her family's first trip to Washington, DC. She was accompanied by her parents, Saurabh Raval and Paulomi Upadhyay; her younger brother, Avyay, 6; and her grandfather, Dilip Upadhyay.

At school, Saumya is particularly interested in science and writing.

For being the millionth visitor, Saumya received a bag of goodies courtesy of the National Archives Foundation.

Last year, the millionth visitor walked into the Archives on July 20.

"Due in part to the five-week Federal Government shutdown, the National Archives Museum is a few weeks later than usual in welcoming our one millionth visitor this year," said Visitor Services Manager Douglas Swanson. "Even with the loss of those additional visitors, I feel confident that the museum will still reach its annual average of 1.2 million visitors this year."

With more than one million visitors walking through its doors, the National Archives Museum welcomes first-time and repeat visitors alike. Visitors can explore the Public Vaults and Records of Rights, which are both permanent exhibits. The Rightfully Hers exhibit, which celebrates the 100th anniversary of the 19th Amendment, runs through January 2, 2021.

Danielle Dorsey and her husband, Brad, of Louisiana, are frequent visitors to the National Archives Museum. "I am very impressed by the history and how the documents are explained for visitors," she said.

For Harry Neuhoff of New York, it took 70 years to make his first trip to see the Charters of Freedom: the Declaration of Independence, the Constitution, and the Bill of Rights. "I'm very glad I came," he said. “When you’re here, you see a sense of pride in the visitors coming to view the Charters."

Tiffany Arnold, an education specialist who works in both the District of Columbia and Prince George's County, is another first-time visitor. She was impressed by the breadth of material in the Archives.

"There's so much we don't know," she said. “In all the years I’ve lived and worked in the DC Metro area, I had no idea just how much of a treasure trove of American history lay in wait for discovery in the heart of the nation's capital.”