WASHINGTON, November 1, 2018 — As the sun set on the National Archives in Washington, DC, on October 13, more than 100 children and their guests, with sleeping bags in hand, poured into the building for a night of fun, games, and history. On the night of the National Archives Sleepover, children learned Native American history from an array of primary sources and experienced sleeping in the same room as the Declaration of Independence, the Constitution, and the Bill of Rights, known collectively as "The Charters of Freedom.”

Twice a year, the National Archives hosts a sleepover in the Rotunda, the stately tall-domed room that houses the Charters of Freedom, followed by a pancake breakfast cooked in the morning by the Archivist of the United States himself, David S. Ferriero. Each sleepover is unique and boasts its own special theme. During the most recent sleepover, guests learned about the history of Native American traditions and culture through activities and games on treaties, the Navajo Code, and primary sources like Native American dance records. 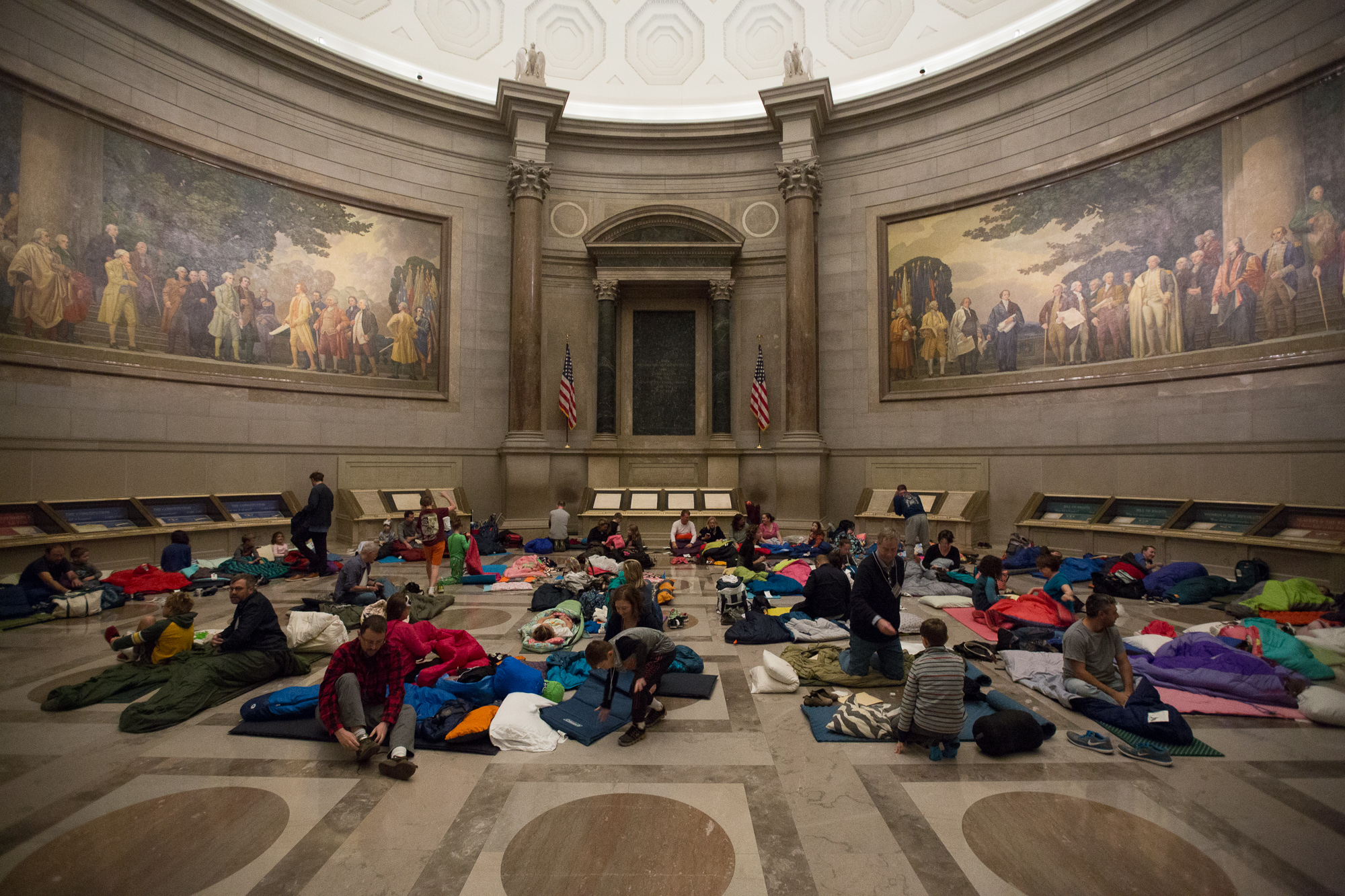 Guests get ready to spend the night next to the founding documents. (Photograph by Jeffrey Reed, National Archives)

Guest speakers offered their perspectives on the Native American theme. Perry Ground, a Native American storyteller, showcased traditional Native garb and tools that guests could handle. Ground taught guests about Native American treaties and showed them how to make wampum (using styrofoam instead of precious shells).

Robert W. Wheeler, an author and expert on Native American athlete and Olympic gold medalist Jim Thorpe, led guests through a presentation with fellow expert Flo Ridlon. Wheeler and Ridlon dedicated much of their lives to researching Jim Thorpe, using primary sources from the Archives to write a biography of him.

“No one had written his life story when I started my research,” Wheeler said about his initiative to write the book. “There have been more lies written about him than any other athlete in history,” Wheeler explained, which was also part of the reason it was imperative for him to seek primary sources on Thorpe from the National Archives. “People said that he was lazy and didn’t train at all,” Wheeler elaborated, “but I found a picture [in the Olympic Committee President’s stacks] that showed Jim on the 1912 Olympic voyage leading the training.”

Across the hall, actor Martin Sensmeier spoke about his upcoming role playing Jim Thorpe in the Angelina Jolie-directed movie Bright Bath: The Jim Thorpe Story. Sensmeier answered a lot of questions from the children about how to become a movie star, with an especially unique perspective coming from Native Alaska.

“I first learned about Jim Thorpe as a kid . . . he’s been gone now for 60 or 70 years, but his story is very much alive,” Sensmeier said. “I’m just honored to be able to tell it on the big screen.”

In a more fast-paced environment, kids gleefully ran around the Public Vaults exhibits, taking part in a scavenger hunt. Just outside the vaults, a keychain-making activity taught guests about the different Native American territories and what they stood for. On the other side of the Rotunda, they composed letters to the President.

If guests weren’t tuckered out enough by 9:20 p.m., they were able to participate in Ground’s storytelling, with the storyteller himself jumping into the crowd to bring the tales of Native tribes to life.

The night culminated with bedtime in the Rotunda with the Charters of Freedom. With glow-in-the-dark tape providing light, guests set up sleeping bags and air mattresses all along the marble floor. Children sprawled out on blankets and gazed up dreamily at the murals painted above them. Then, it was lights out at 11 p.m.

Guests were woken at 7 a.m. with music and led to tables downstairs for a chocolate chip pancake breakfast. Book signings were also available, along with professional photographs.

As guests departed their night at the Archives, many staff and volunteers said they hoped that the guests would bring some pieces of history home with them to share, whether it be new knowledge on Native tribes or mementos like the keychains and Wampum.

Beyond the “invaluable” experience of traveling to another part of the country, one guest said that she hope her child will go forward feeling encouraged to explore things she already enjoys more deeply.

“Connecting our sightseeing experiences with a picture and a voice at the Archives was eye-opening to her. History isn’t just pieces of paper but stories about people and experiences that can come to life,” said Amy Forsch on the sleepover. “Expanding her experiences, expectations, and horizons is something I feel blessed to be able to contribute to and believe is imperative in nurturing a well-rounded citizen of this nation and world.” 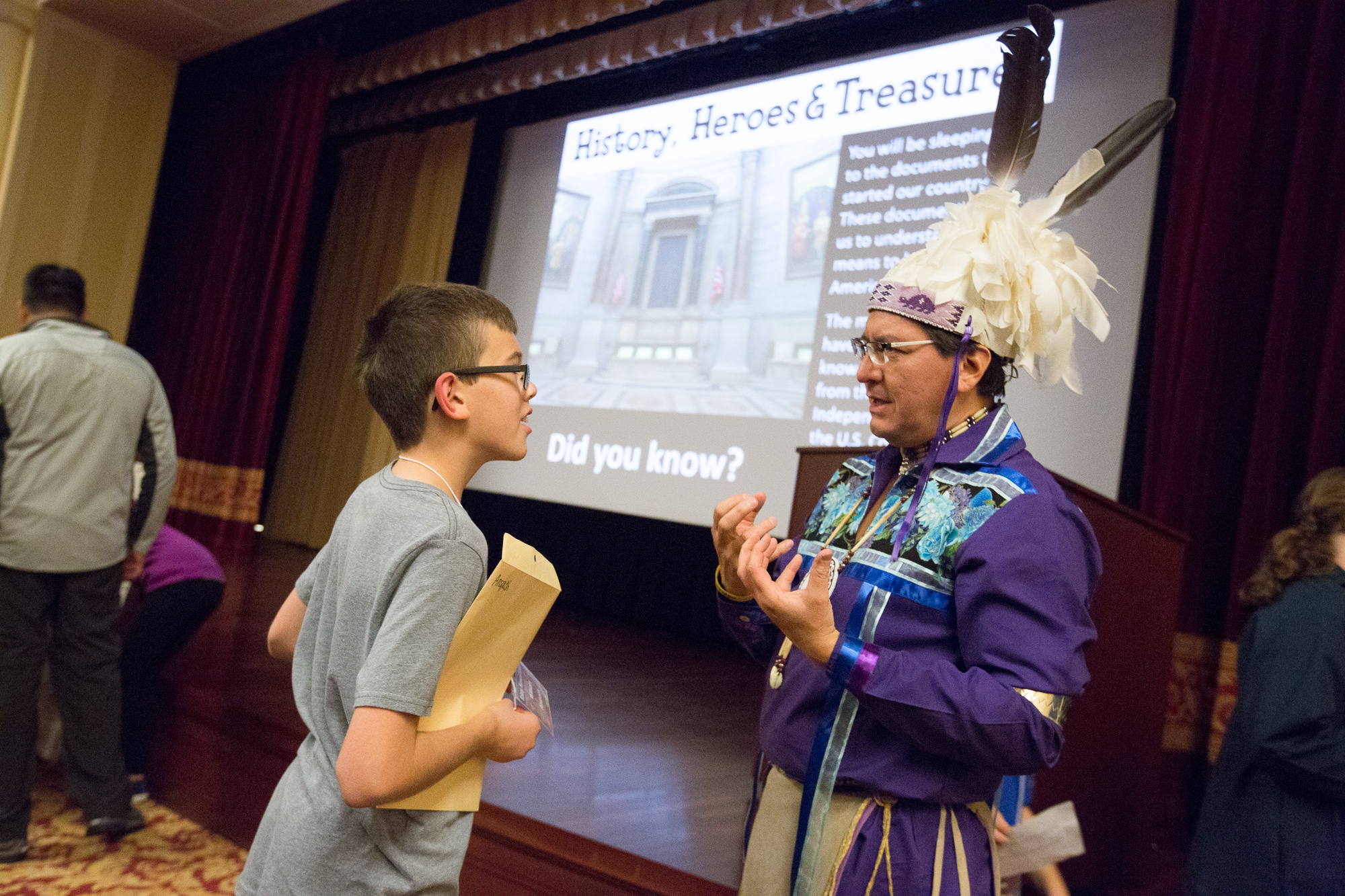 Guests played games, like this scavenger hunt, in the museum. (Photograph by Jeffrey Reed, National Archives)

Perry Ground talks with a young guest about how wampum was made. (Photograph by Jeffrey Reed, National Archives)

Guests got dressed up to go to bed in the Rotunda next to the Constitution. (Photograph by Jeffrey Reed, National Archives)

Guests get ready to spend the night next to the founding documents. (Photograph by Jeffrey Reed, National Archives)

Bob Wheeler, biographer of Jim Thorpe, talked about his research and signed copies of his book. (Photograph by Jeffrey Reed, National Archives)