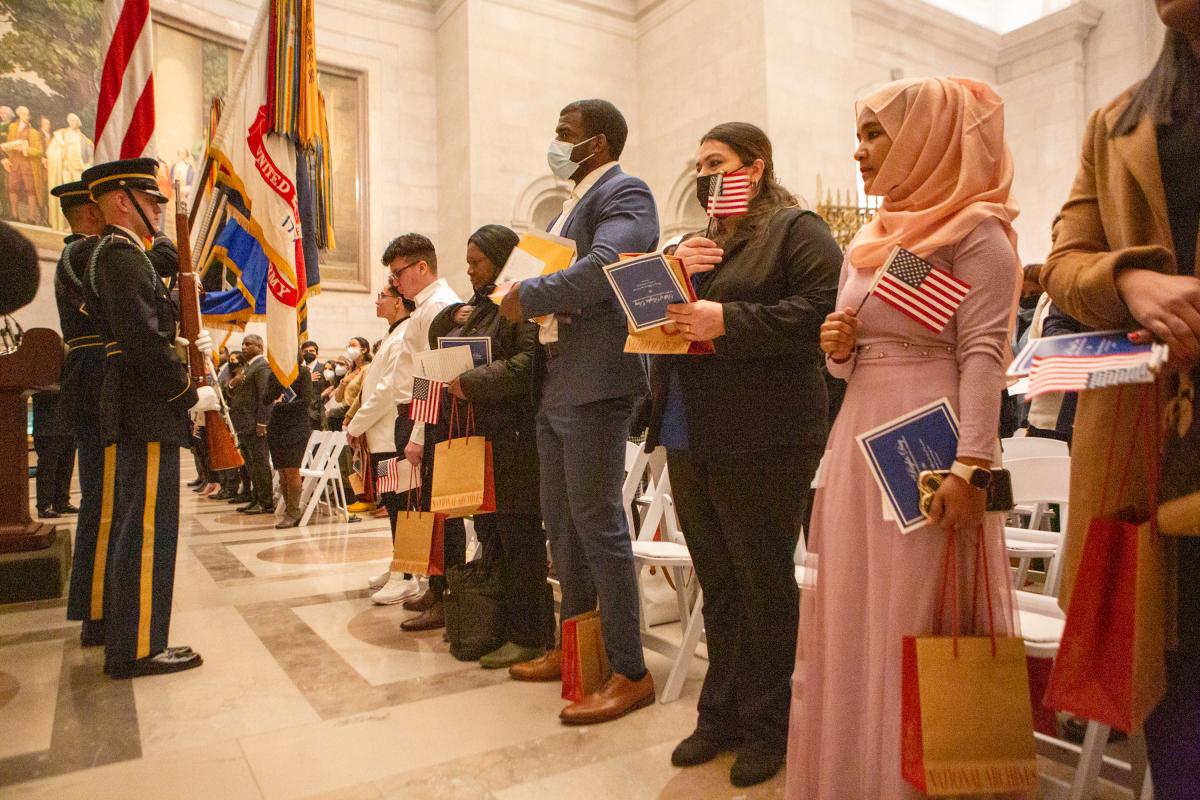 The Joint Armed Forces Color Guard presents the colors at the annual Bill of Rights Day Naturalization Ceremony on December 15, 2022. The event is held in the Rotunda of the National Archives Building in Washington, DC. Photo by Susana Raab.

The naturalization ceremony is part of a long-standing partnership with U.S. Citizenship and Immigration Services (USCIS) and the U.S. District Court for the District of Columbia to create a special citizenship event amid the backdrop of the country’s Founding Documents.

“These rights are now your rights as U.S. citizens,” Acting Archivist of the United States Debra Steidel Wall told the audience. 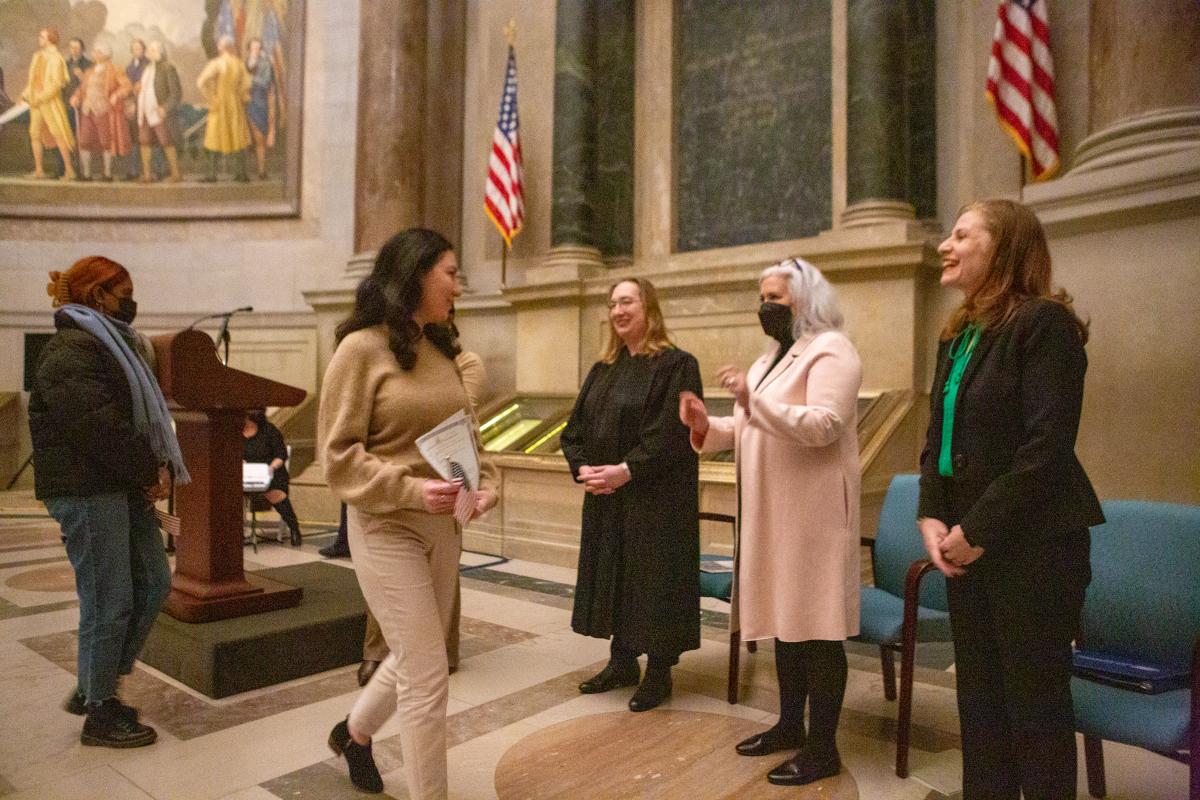 Students from Washington’s Friendship Public Charter School—Armstrong Campus recited the Preamble to the Constitution for the crowd.

The Honorable Beryl A. Howell, Chief Judge of the United States District Court for the District of Columbia, administered the oath of citizenship.

"You are now as American as apple pie," Cardona told the new citizens after they recited the oath, to laughter from the audience.

"It is our privilege to welcome you to 'We, the People,’” he added, quoting the first line of the Constitution’s Preamble.

Following the December 15 ceremony, newly sworn-in citizen Ricardo, who was born in Peru, grew up in Indiana, and now lives in Washington, DC, was asked, “How do you feel today?” 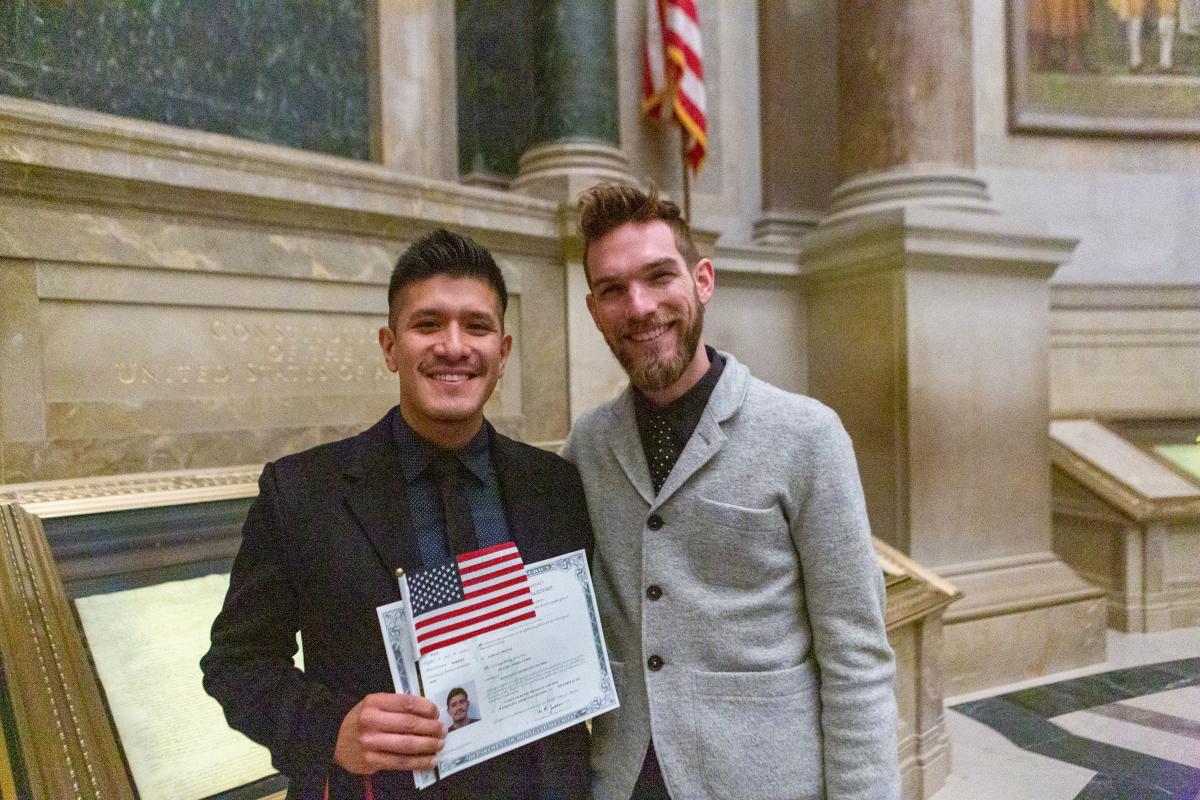 New U.S. citizen Ricardo and his spouse stand in front of the Constitution after Ricardo's naturalization ceremony on December 15, 2022. Photo by Susana Raab.

“It feels like I belong,” he answered, before posing with his spouse in front of the Constitution for a photo.

The National Archives traditionally hosts two naturalization ceremonies in the Rotunda annually. The first is held in September to mark Constitution Day, and the second in December in honor of Bill of Rights Day.
This year marks the 231st anniversary of the ratification of the Bill of Rights on December 15, 1791. This document guarantees the freedoms of religion, speech, the press, assembly, and the right to petition the Government for redress of grievances.

It is displayed in the Rotunda, along with the Declaration of Independence and the Constitution.

Since 2011, over 600 new citizens from more than 100 countries have become citizens in ceremonies at the National Archives Building in Washington, DC.