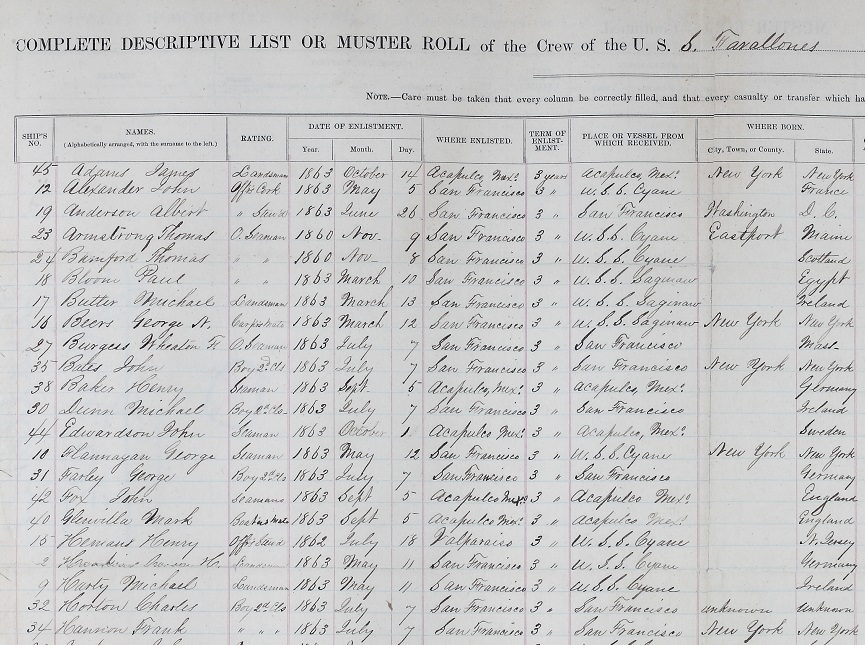 WASHINGTON, July 11, 2019 — The National Archives partnered with the Joint Institute for the Study of the Atmosphere and Ocean (JISAO), the National Oceanic and Atmospheric Administration (NOAA), and the University of Washington to digitize more than 500 volumes of U.S. Navy muster rolls, making them accessible to the public through the National Archives Catalog.

These records are the official lists of enlisted sailors assigned to different ships from 1861 to 1879. For this pivotal time in American history, the muster roll data provide not only the names, birthplaces, ages, discharges, and physical description of enlisted seamen but also information on contraband sailors, which referred to African Americans who escaped enslavement and served in the Navy during the Civil War.

In addition, the National Archives will digitize thousands of Navy logbooks containing new-to-science ocean and weather data as well as the names of ship’s officers and other details of daily shipboard life. After the digitization of the logbooks is complete, the Archives and NOAA will call upon citizen archivists, genealogical researchers, and climate scientists to help transcribe information from the logbooks and muster rolls into digital formats usable by computers. Citizen archivists can now transcribe this muster roll data from the catalog.

Once this phase of digitization is complete, possible research will include the recovering of position of ships, weather records, oceanographic data, and other historical information that will have a profound impact on our ability to study and understand the influence of weather and environmental conditions on people and events during this era.

“By providing a digital copy of the records to the public through the National Archives Catalog,” said Enas, “these records can now be accessed by countless researchers.”