WASHINGTON, February 28, 2018 — Nine-year-old Madeline Gurbach and her dad, Matthew, visited Washington, DC, in January 2018. This happened to be during a Federal Government shutdown. The National Archives museum, like dozens of other Federal sites, was closed that day. 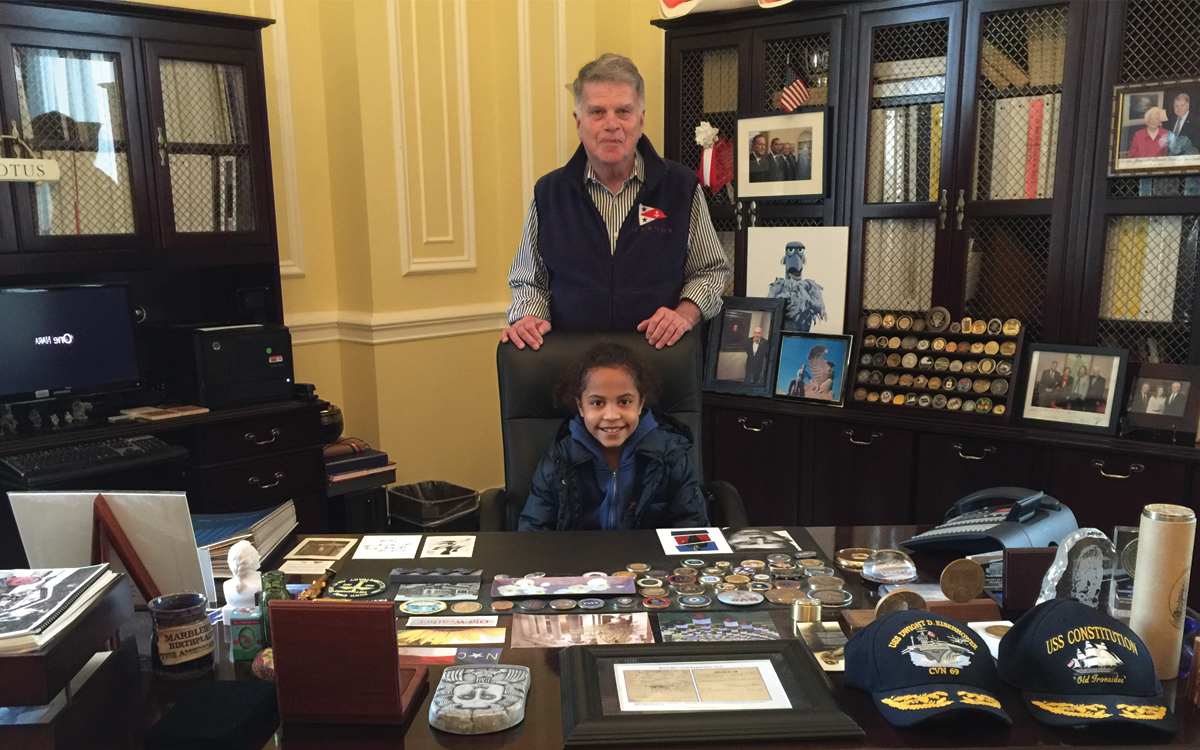 A Visit with the Archivist

Archivist of the United States, David S. Ferriero, introduces 9-year-old Madeline Gurbach of Ohio, around his office at the National Archives in Washington, DC. (Photo courtesy of Matt Gurbach)

Outside the closed doors, a newspaper reporter was interviewing citizens who came to visit but couldn’t get in, asking their thoughts on the government shutdown. The reporter quoted Madeline as saying, “I didn’t want to go in there anyway.”

When Archivist of the United States David S. Ferriero read of Madeline’s and her father’s experience in the paper the next day, he immediately wrote them a letter inviting them back to the National Archives upon the reopening of the Federal Government.

But Ferriero didn’t just invite them to the museum for a tour. Madeline and her dad received an invitation to attend the National Archives sleepover—an event held for 8-to-12-year-olds and their chaperones—and a rare opportunity to join a small number of kids across the United States who have participated in the educational adventure.

Ferriero explained that he wanted the Gurbachs to fully experience all that the National Archives has to offer, and he saw the event as the perfect venue to do just that. The sleepover itself, as an event, was originally his idea.

“I wanted to do this from the beginning of my appointment here,” Ferriero said. “I took one look at the Rotunda and knew we had an opportunity to introduce kids to the National Archives and give them a chance to get excited about the country’s founding documents and the importance of our nation’s history.”

Ferriero said the educational experience has become more successful than he ever imagined.

“Families have come from all over the country and most have come specifically for this,” he said. “What a rare opportunity it is to be able to sleep in the presence of the Charters of Freedom.”

This was the 10th sleepover offered at the National Archives since the first one held in January 2014. Designed for 8-to-12-year-olds and their accompanying adults, the event allowed participants access to the entire museum on February 24-25, 2018.

One hundred and ten event participants came from all over the country, from nearby states such as Virginia and Maryland, to New Jersey, New York, Delaware, Massachusetts, Ohio, Tennessee, and even Washington state.

Amber Kraft, a National Archives education specialist who is instrumental in planning and facilitating the event, said it creates a connection between children and very important historical documents.

“The Archives sleepovers are a powerful way to make the National Archives and the records that we keep here relevant to the next generation of Americans,” Kraft said.

“Participants have the opportunity to engage with stories held here in way that makes learning irresistible,” she said. “I hope that the participants will fondly remember their experiences here and make connections to it throughout their lifetimes.”

The evening was packed full of space-themed activities and games. Children attending the sleepover had the opportunity to look through telescopes; go on space missions—collecting trading cards of astronauts on various missions and completing the mission as a team; try on astronaut garb and gear; and even chat with an astronaut. Charles Bolden, who flew four space missions for NASA, greeted the children and their families in the Boeing Learning Center. He spoke at length with each child and happily answered all of their questions.

In addition to talking with Bolden, Madeline built and launched a paper space rocket, participated in a scavenger hunt in the museum, and tried on astronaut gloves—trying to disassemble and reassemble a lego set—simulating the weightlessness and difficulty that bulky space gloves present astronauts on a real mission. She also got to sleep next to the Charters of Freedom documents, and even enjoyed a pancake breakfast cooked by the Archivist of the United States himself.

As Madeline made her way into the quiet Rotunda before settling in for the night, she marveled wide-eyed at the colorful mural gracing the Rotunda dome. She and her father excitedly viewed each of the nation’s founding documents.

Madeline commented with surprise at the faded condition of the Declaration. And as her dad pointed out the articles of the Constitution and the establishment of the three branches of government that Madeline had so proudly named earlier that evening, she explained how she had recently learned that in her fourth-grade social studies class.

When asked what she thought about the documents and the National Archives, now that she finally had a chance to see them in person, Madeline simply smiled from ear to ear and said, “this is pretty cool.”

For more information or to register for the next museum sleepover—scheduled for October 13–14, 2018—check the National Archives Foundation website or our calendar of events. The theme for the next event will be “Hollywood.” Each all-nighter is capped at 115 participants. 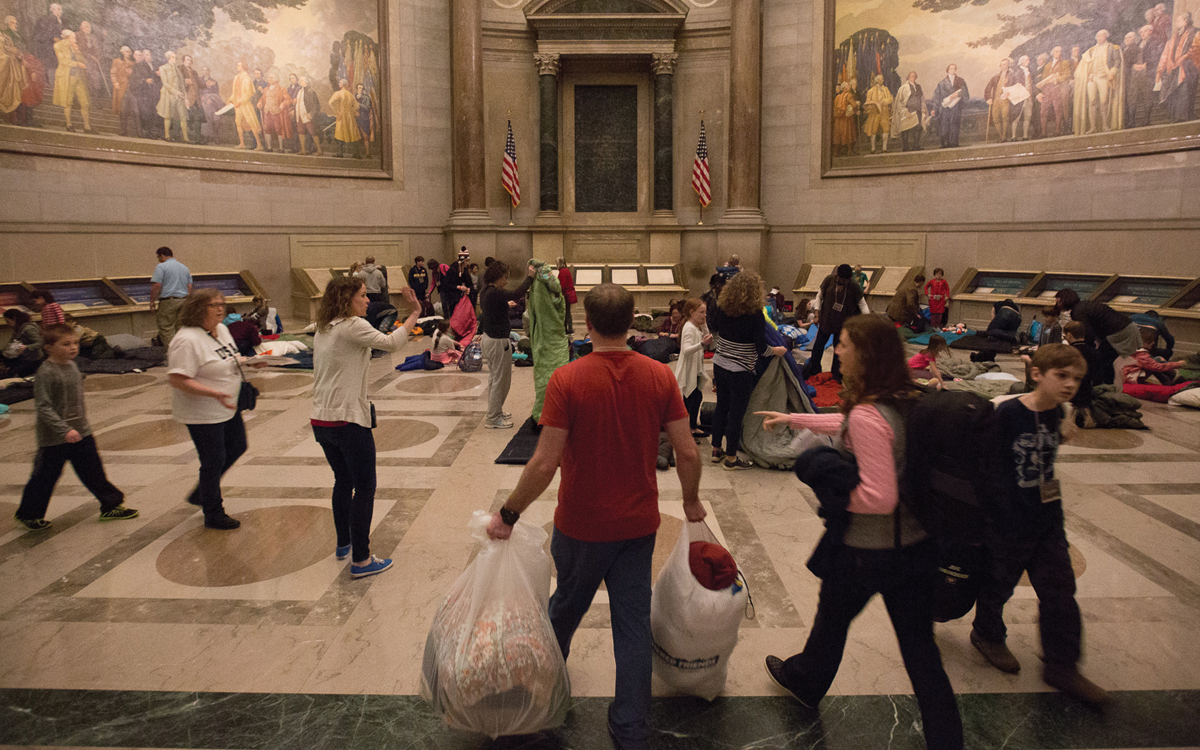 Matt Gurbach and his daughter, Madeline, join Archivist of the United States (right) at the National Archives sleepover on February 24-25, 2018 in Washington, DC. (Photo courtesy of Matt Gurbach)

A sleepover participant—armed with his overnight gear, a “goodie bag,” and his umbrella—prepares to head home after the National Archives Sleepover held February 24-25, 2018, at the Washington, DC, museum. (National Archives photo, Jeff Reed)