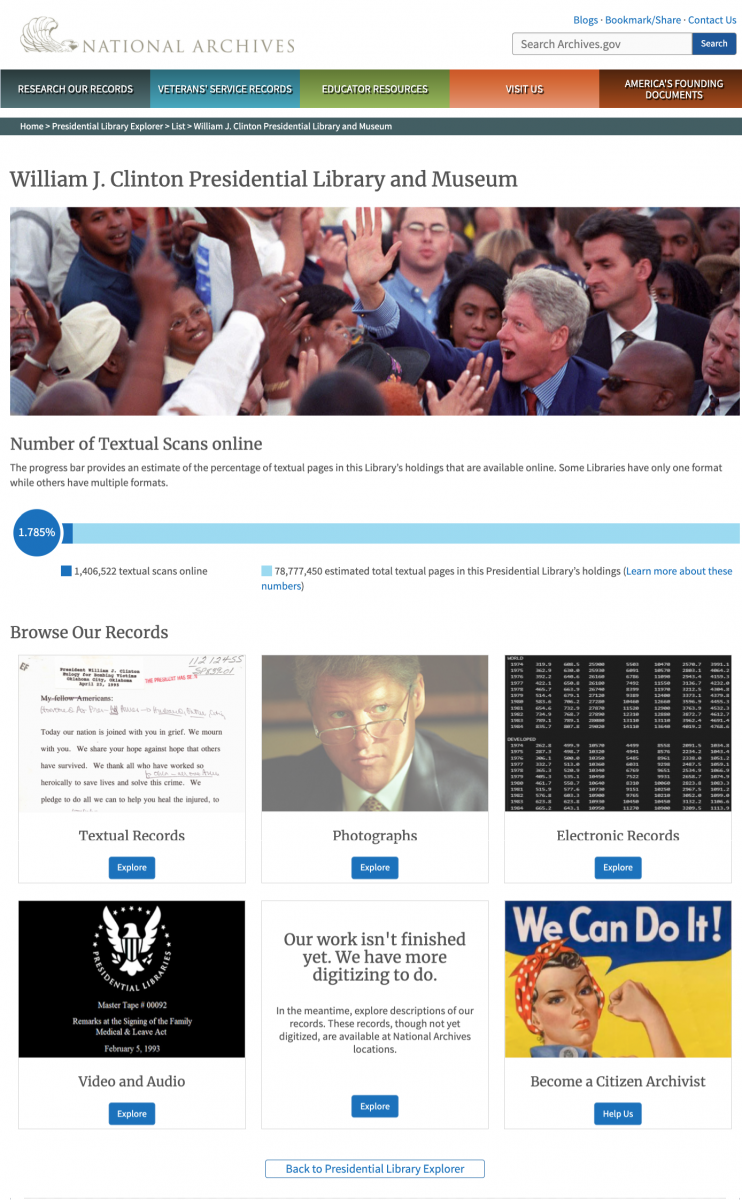 WASHINGTON, August 27, 2020—Researchers now have a new pathway into millions of digitized records across the National Archives’ 14 Presidential Libraries. The Presidential Library Explorer, launched this month, provides a more efficient way for visitors to search through records in the libraries’ holdings.

“It’s a more user-friendly way of perusing the National Archives Catalog,” says Jason Clingerman, Acting Director of the National Archives Digital Engagement Division. “It’s like being in a library, and instead of walking around trying to look at every book on the shelf, you see the kiosks for staff-selected books for the month,” he explained.

Each library portal allows the public to navigate through links that separate the textual records, photographs, maps, electronic records, and video and audio related to each President. Finding aids are tools that help a user find information in a specific record group, collection, or series of archival materials.

In fall 2019, the Office of Innovation launched the Record Group Explorer, the National Archives’ first next-generation finding aid. The Presidential Library Explorer is the second such finding aid. The tools leverage the work of several decades to digitize and describe records into a more easily accessible browsing experience.

Currently, the most-digitized libraries are those of William J. Clinton and Harry S. Truman.

“The project required collaboration from Washington, DC, to California, and across the South and Midwest. The Office of Innovation worked with staff from Presidential Libraries to design the Explorer and to select which records to feature on each Discovery page,” says Pamela Wright, Chief Innovation Officer.

The Record Group Explorer released in 2019 brought the National Archives to 84 percent of its holdings accessible through next-generation finding aids; the latest addition pushed that figure to 91 percent, which exceeded the anticipated annual goal for this fiscal year.

Clingerman says the project also aimed to be transparent about the scope of the National Archives' digitization ambitions.

Featured prominently in the Explorer is a progress bar indicating how many of the textual records across the 14 Presidential Libraries have been scanned.

“We wanted to tell the story of the National Archives’ digitization,” says Clingerman. “What we're trying to show is that despite the immense amount of work we’ve put into digitization, this is still the tip of the iceberg. We are digitizing more records every day, and we are proud to track our progress with our researchers and stakeholders.”