WASHINGTON, July 12, 2018 — The political lives of Dr. Martin Luther King, Jr., and Robert F. Kennedy—both central figures in the civil rights movement of the 1960s—intersected at a critical time in U.S. history. 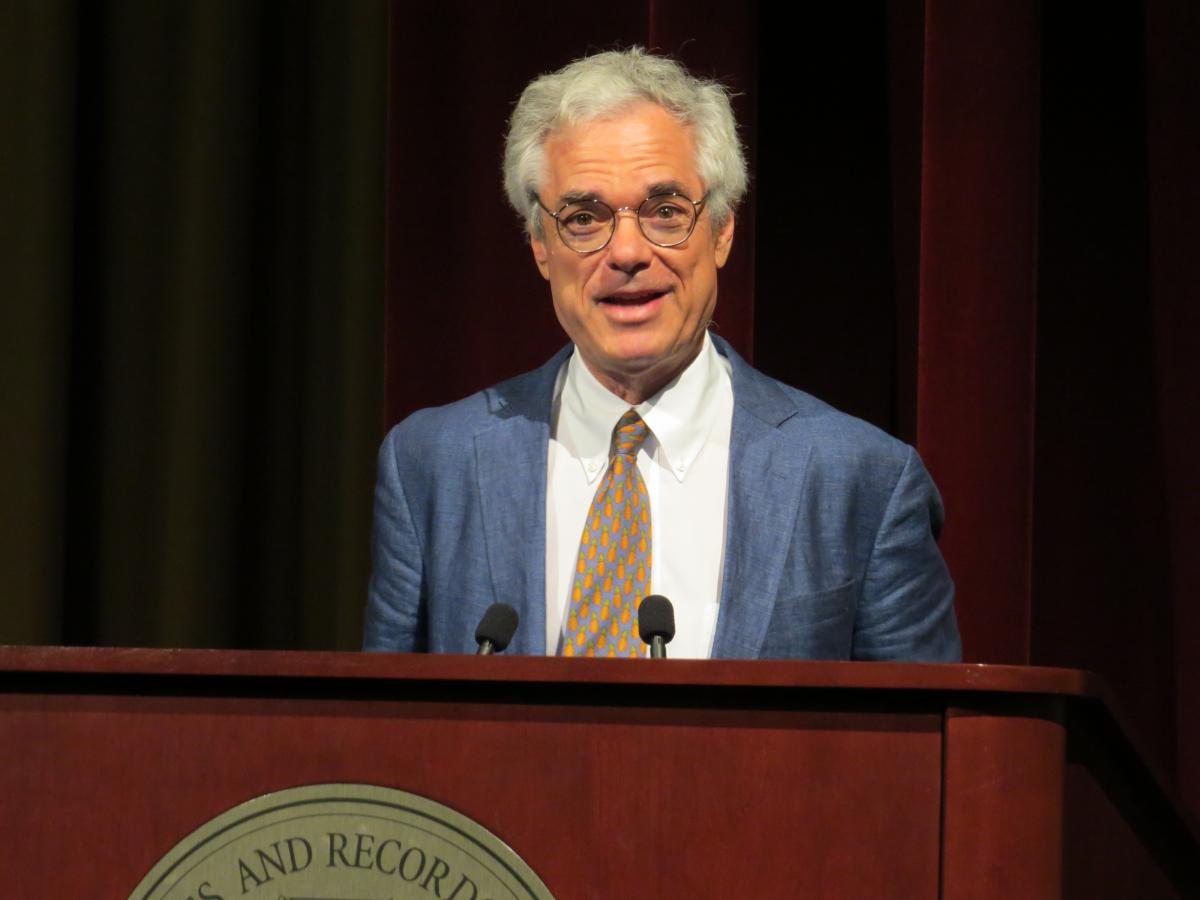 Author David Margolick shares his research about the tenuous relationship between Martin Luther King, Jr. and Robert F. Kennedy during his recent book talk on July 9, 2018, at the National Archives in Washington, DC. (National Archives photo by Jason Winston)

“One of the striking things that I learned in the course of the book was even after Kennedy gave that speech in Indianapolis . . . surely his greatest speech—that was the only time he spoke publicly and explicitly about Martin Luther King,” Margolick said. “The only moment he felt free to embrace Martin Luther King was after [he] had died. And even then, it was a fleeting moment.”

Margolick shared details about the often tenuous relationship between the two influential leaders.

“While this relationship had slowly improved from contentious to careful to respectful over the eight years they had known each other, and their causes had come increasingly to overlap,” he said, “the two men had never been close. The racial and cultural divide between them had simply been too broad. They’d become allies but never had they been friends.”

The author shared that while the men were roughly the same age, both were deeply religious and charismatic, both were very politically influential, and both had what Margolick termed “larger-than-life tyrannical fathers,” similarities stopped there.

“Their differences—not just in race and class but in geographical origins, temperament, power, and position—were much more dramatic. Given the distant poles from which they began, it’s impressive [and] inspiring to see how closely aligned on the issues . . . they became.”

Margolick attributed their interactions as having greatly influenced each other, particularly near the end of their careers.

“When they’d met, Kennedy had little experience with, or interest in, or understanding of, or empathy for blacks,” Margolick explained. “King helped coax out Robert Kennedy’s better angels, especially with the 1963 protests in Birmingham that led to the Civil Rights Act of 1964.”

“Theirs was an uneven relationship,” Margolick added. “King was the one to say please and thank you. King was not without his powers. He’d arguably gotten John Kennedy elected [to the Presidency], and he was the custodian of a large chunk of his legacy. And while he hectored, lectured, criticized, and exasperated Robert Kennedy, he also helped educate him.”

Author David Margolick shares his research about the tenuous relationship between Martin Luther King, Jr. and Robert F. Kennedy during his recent book talk on July 9, 2018, at the National Archives in Washington, DC. (National Archives photo by Jason Winston)

The author said he felt privileged to share their story and explained how access to records at the National Archives helped him to tell it.

“This book sort of started at the Archives in a way,” Margolick explained. He shared how an introduction to Archivist of the United States David S. Ferriero and his offer of help paved the way. Margolick pointed to several collections of records held at the John F. Kennedy Library and Museum as particularly valuable to his research. Those records included interviews for a book about Robert Kennedy’s last train ride, he said, referring to the train that took RFK’s body from his funeral in New York City to Union Station in Washington, DC, and then to Arlington National Cemetery.

“There were dozens and dozens of people who were interviewed for this project, most of whom were no longer around,” Margolick said. “The interviews were not only about the train ride itself but aspects of Robert Kennedy’s entire career. They were really quite precious.”

Margolick added, “We all want to make our contributions to history and to find these things in the Archives. . . . There’s no way you can thank enough the people who open up things to you that no one has really looked at before. So this is my way of thanking the people at this wonderful institution,” he said.

National Archives Chief Operating Officer William J. Bosanko, who introduced the afternoon booktalk, shared this sentiment, pointing to the value of the records at the National Archives and the countless stories yet to be told that are hidden among the records.

“The holdings of the National Archives—which document our national life, our rights, and the work of our government—contain countless untold stories that still need to be discovered and told.  And that is what makes the efforts of authors such as David Margolick so important,” Bosanko said.