WASHINGTON, October 22, 2019 — History came alive at the National Archives for 57 children and their guardians on October 12  as they took part in a night of historical fun and games during a National Archives Sleepover. 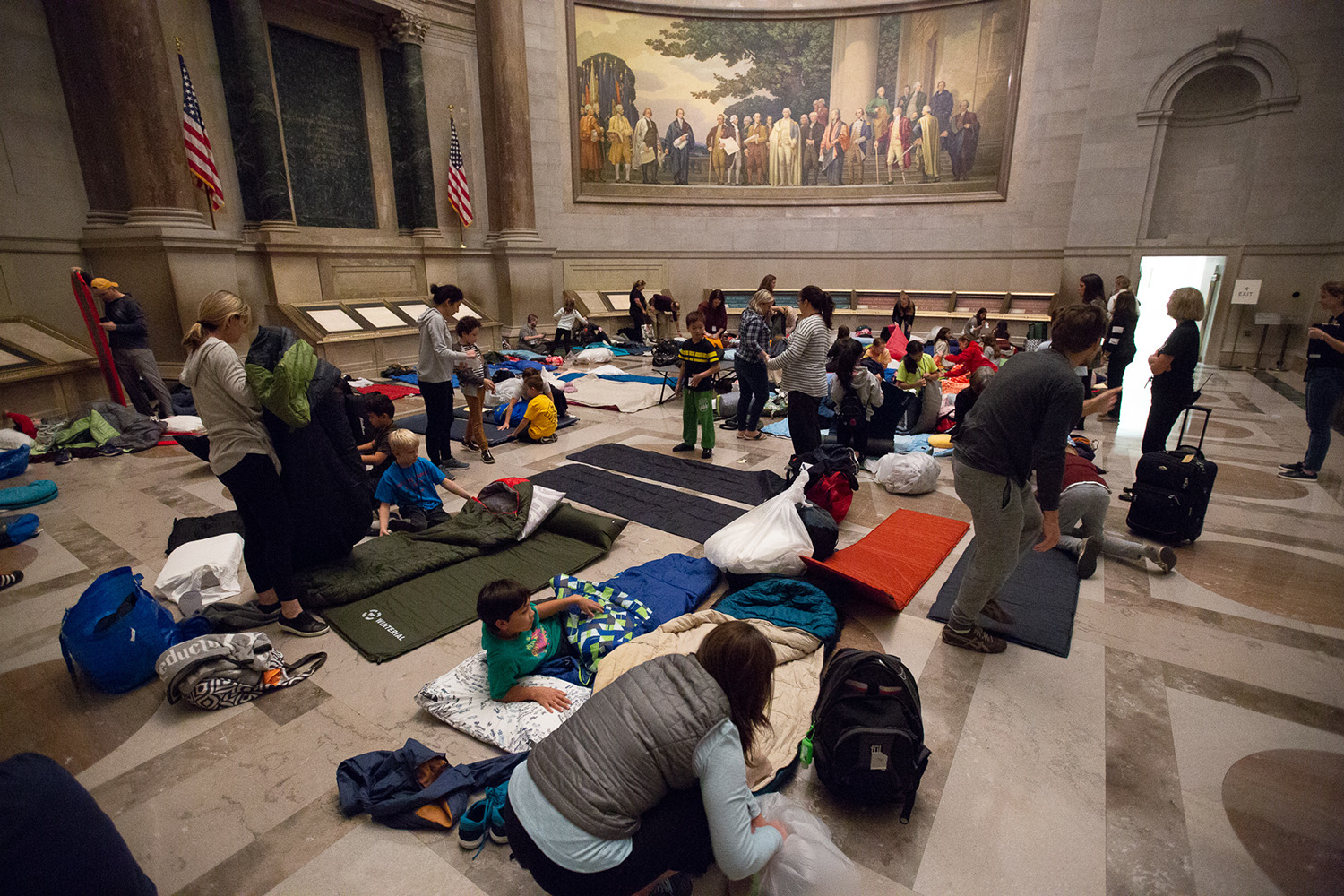 Children came from around the country for the event, which culminated in them bedding down in the Rotunda for the Charters of Freedom, the permanent home of the Declaration of Independence, the Constitution of the United States, and the Bill of Rights. The event brought families from as far away as Washington State, Tennessee, Massachusetts, New York, and Pennsylvania.

Archivist of the United States David S. Ferriero welcomed the group and pointed out how fortunate they were to have such an experience.

“Very few people get to sleep in the presence of the Charters of Freedom. This is a very small club that you are a member of,” Ferriero said.

This year, sleepover visitors engaged in woman’s suffrage–themed activities honoring the Rightfully Hers exhibit on display in the Lawrence F. O’Brien Gallery. The guests also enjoyed a Q & A with honored guests plucked from the pages of history: Elizabeth Cady Stanton and Frederick Douglass, who talked to the audience of future historians in the William G. McGowan Theater.

Among the new faces, the National Archives welcomed back some old friends.

Karen and Matt Horvath-Wulf and their daughter, Kaite, marked their fourth Archives Sleepover and got an exclusive sneak peek at the Archivist’s office. “Every year, we learn something new about the importance of documents in history,” Matt Horvath-Wulf said.

Aiden Robson returned for a second time after attending the sleepover in October 2018 “because it was fun.”

“He really liked the cultural learning part, so we look forward to what you have in store for us tonight,” said Nick Robson, Aiden’s dad. At last year’s sleepover, father and son were inspired by Perry Ground, a Native American storyteller, to learn more about the Onondaga Nation in New York State, where they lived at the time.

Susan Schantz came to our first sleepover in 2014 with her son, and now she is here with her daughter, Caroline. “It’s one of the best things we’ve ever done,” Schantz said.

But it wasn’t just our guests who had a great time.

“My favorite thing is seeing how excited the kids get about history,” said Katie Munn, an education specialist at the National Archives. Munn, one of 31 National Archives staff members who helped coordinate the event, was in charge of playing the musical selection for the morning wake-up call and helping the visitors vote for the song they wanted to hear.

During the sleepover, explorers dove into our nation’s treasured records, explored the museum with a scavenger hunt, slept in the Rotunda near the Declaration of Independence and Constitution, and made memories to last a lifetime. Bright and early Saturday morning, the Archivist served up some hot pancakes for his guests, followed by more fun activities before bidding everyone a fond farewell. 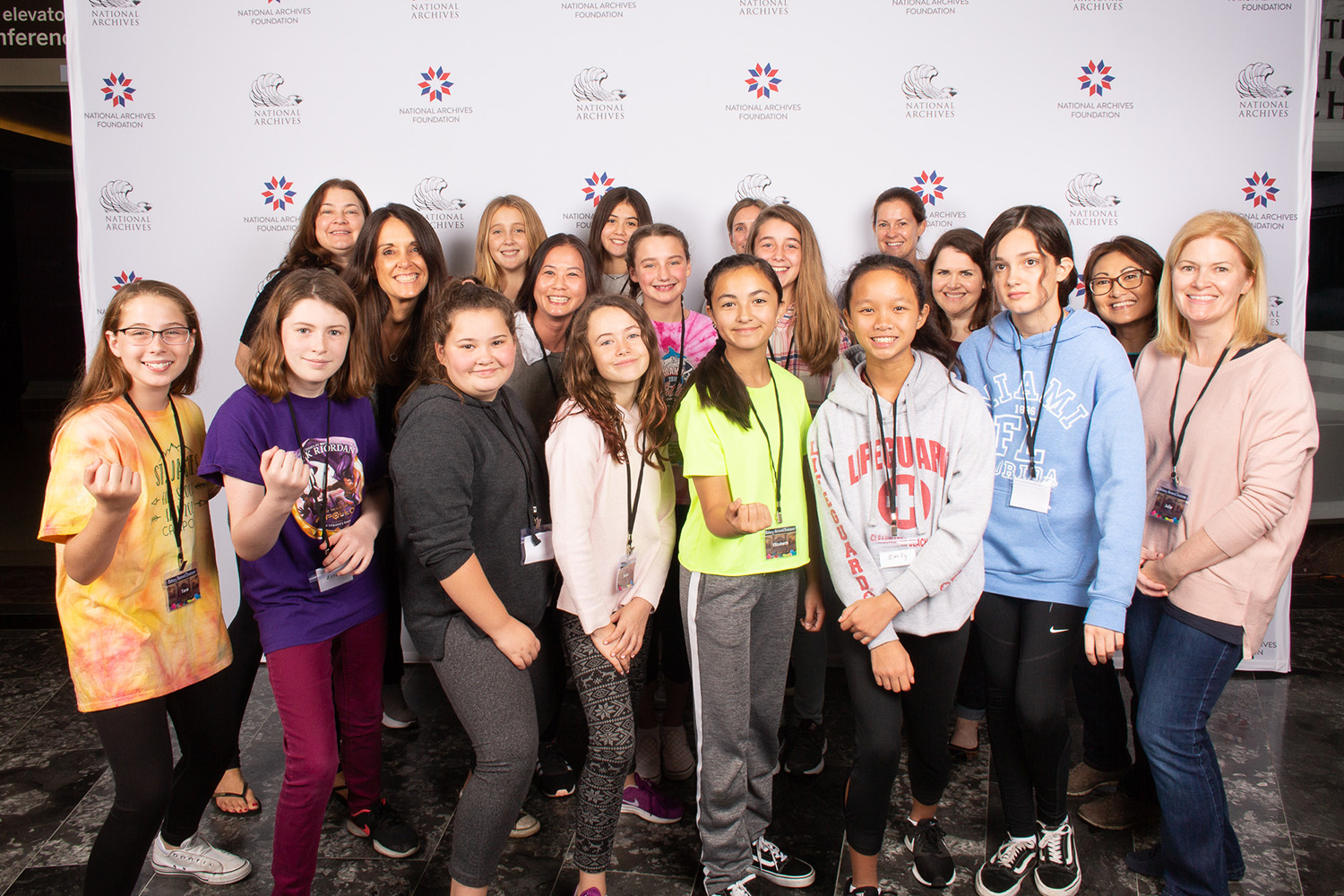 National Archives Sleepover guests inspect the Charters of Freedom—the Declaration of Independence, Constitution of the United States, and Bill of Rights—in the Rotunda. (National Archives photo by Jeffrey Reed)

Two sleepover guests prepare to turn in for a night in the Rotunda. (National Archives photo by Jeffrey Reed)

Sleepover guests roll out their sleeping bags in the Rotunda. (National Archives photo by Jeffrey Reed)

A young reader enjoys her book before "lights out." (National Archives photo by Jeffrey Reed)

The Horvath-Wulf family rolled out their sleeping bags for their fourth Archives Sleepover. (National Archives photo by Jeffrey Reed)

Archivist of the United States David S. Ferriero chats with several of his guests before flipping hot pancakes onto their plates at breakfast. (National Archives photo by Jeffrey Reed)