WASHINGTON, January 31, 2020 — The National Archives in Washington, DC, hosted a panel discussion among current and former student journalists who addressed issues surrounding First Amendment rights on college campuses. The event was held in partnership with the Student Press Law Center on January 29, in observance of Student Press Freedom Day. 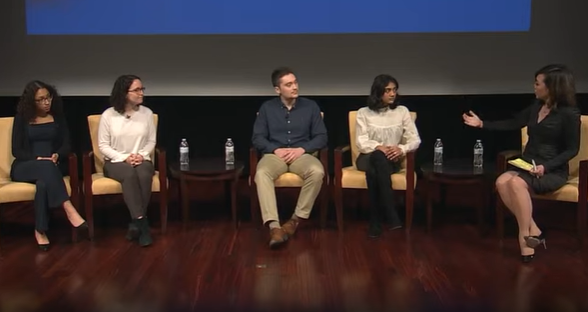 Archivist of the United States David S. Ferriero introduced the event and spoke to the significance of hosting this event in the building that houses the Constitution and the Bill of Rights—which set forth the First Amendment rights of freedom of the press and freedom of speech.

“As the home of the original Constitution of the United States and the Bill of Rights, we are the natural venue to host this discussion on press freedom, and the important role that journalists play in this democracy,” Ferriero said.

The panel consisted of Maya Goldman, editor-in-chief of the Michigan Daily; Neha Madhira, former editor-in-chief of the Eagle Nation Online of Prosper High School in Prosper, TX, and a current staff writer of the Daily Texan at the University of Texas at Austin; Kristine Guillaume, president of the Harvard Crimson; and Joe Severino, former news editor at the DA of West Virginia University and current reporter of the Charleston Gazette.

“In reading their stories and learning about the experiences that they have had, I will tell you that in my entire career, I’m not sure I have faced the kinds of challenges that you have seen so early in your careers,” Chen said in her statement introducing the journalists.

Each student journalist shared their struggles, successes, and restrictions under censorship from school administrators.

Madhira expanded upon some limitations, such as high school administrators suppressing the amount of negative content that was put out about the school or its staff.

Madhira referenced her Ted Talk about limitations on student journalists, despite their efforts to practice fair journalism and their use of the Society of Professional Journalists Code of Ethics. In the Ted Talk, Madhira recounted how her school principal criticized the Eagle Nation Online for not being positive or uplifting enough, required administration review before publishing, and fired the school’s journalist adviser. The student journalists were eventually successful in their efforts to reverse their principal’s policies on prior review and prior restraint.

In addition to censorship, some student writers faced backlash for their work.

For example, while serving as the president of the Harvard Crimson, Guillaume received national news coverage after the newspaper was criticized for requesting comment from a spokesperson from the U.S. Immigration and Customs Enforcement (ICE) for an article titled “Harvard Affiliates Rally for Abolish ICE Movement.” Criticism included a petition from Act on a Dream, a student-led immigration advocacy group, which demanded that the Crimson change its policies on requesting comment, apologize to undocumented students, and commit to protecting these students.

When asked by Chen how the Crimson dealt with the blowback from their story, Guillaume replied, “For us it was about continuing to report, to keep reporting with due diligence, and to go out and find the people that would talk to us.”

Social media has also been a large platform for journalists to publish their work and for others to consume news. However, Guillaume said, it can also serve as an echo chamber that has “impeded our ability” to listen to other perspectives on an issue.

Nearing the end of the panelists' discussion, Chen introduced the court case of Hazelwood v. Kuhlmeier (1988), which rendered the decision that student journalists’ First Amendment rights are not violated when school officials or administration prevent publication of certain articles in the school newspaper. The students disagreed with these limitations, which exceed those on other journalists.

Mary Beth Tinker, a free-speech activist, attended the event. Tinker became famous for her role in Tinker v. Des Moines Independent School District (1969), which ruled that Warren Harding Junior High School was not able to punish her for wearing a black armband that indicated opposition to the Vietnam War.

The students on stage had many things in common—specifically, their passion for journalistic writing, their hope to eliminate the restrictions they have as student journalists, and their commitment to presenting the truth and all sides of a story impeccably.

“If you’re going to be living and studying next to the people you’re covering, work as hard as you can to get it right,” Guillaume said.