Tracing a Soldier’s Service at the Archives

WASHINGTON, August 6, 2018 — When photo historian Larry West acquired an image of a black Civil War soldier, he simply had to know more about him. West, also a Civil War memorabilia collector who specializes in African American history and culture in the 19th century, began his search for details of the man’s history almost immediately.

And he credits the National Archives and Records Administration for helping him uncover a unique story of dedication and service during a tumultuous period in American history.

Young Ohio native John Atkinson joined the Union Army as a musician near the start of the Civil War, according to Larry West’s extensive research. Atkinson reenlisted seven times during the course of his 30-year career. (Photo by Larry West)

West began his research online through common genealogical sites. He started with the tintype image of the soldier and two of the soldier’s discharge papers from his third and fourth enlistments. He knew the soldier’s name, John Atkinson, and that he was born in Marietta, Ohio, on February 28, 1845.

At the National Archives, West was able to unlock many of the crucial missing details of Atkinson’s long and detailed military service history and life.

Atkinson, a black soldier in the Union Army, served during most of the Civil War. According to military records West found at the National Archives, Atkinson joined the Union troops on July 22, 1861, shortly after the war began. What still puzzled West, however, was that Atkinson’s service to his country commenced well before most black men were even allowed to serve as soldiers. The U.S. Colored Troops (USCT) were established only after Congress approved the admission of black soldiers into service on May 22, 1863.

As West uncovered more details of Atkinson’s military service, he found an interesting fact: in only one document—Atkinson’s January 1869 discharge papers—was his race ever clearly noted as “black.” Other documents merely left the space blank or described his race as simply “light” or “dark” complexion with black/dark eyes and black/dark hair.

“This piece was particularly puzzling because John went into the Civil War at a time when African Americans were not allowed—at least not as fighting soldiers,” West explained. “However, President Lincoln allowed African Americans to act in service functions for the Union Army as musicians, cooks, wagon masters, and blacksmiths."

“Based on my research, it looks like that’s just what John did,” West says, referring to his tintype image of a uniformed Atkinson with his bugle. He added that he believes that Atkinson used music as a way to enlist and serve—at least at first—based on his long record of service documented in the military service.

“The records at the National Archives were so critical to my research,” West added. “There were at least 10 John Atkinsons, but the rest were white. What complicated factors even further was the fact that the first ‘n’ was left out of John’s last name in some places. It truly was a puzzle with many, many complicated pieces.”

Atkinson was a career soldier, serving for more than 30 years and enlisting a total of seven times. He even served as a “Buffalo Soldier,” protecting  expansion and settlement of the American West in the Indian Wars.

“He was a totally fascinating individual from a fascinating family,” West said. “This was a biracial farming family in the free state of Ohio . . . these are free men and their feelings were very strong regarding slavery. From my research, it looks like John’s dad had some role in the Underground Railroad in Ohio. He certainly was into abolition.” 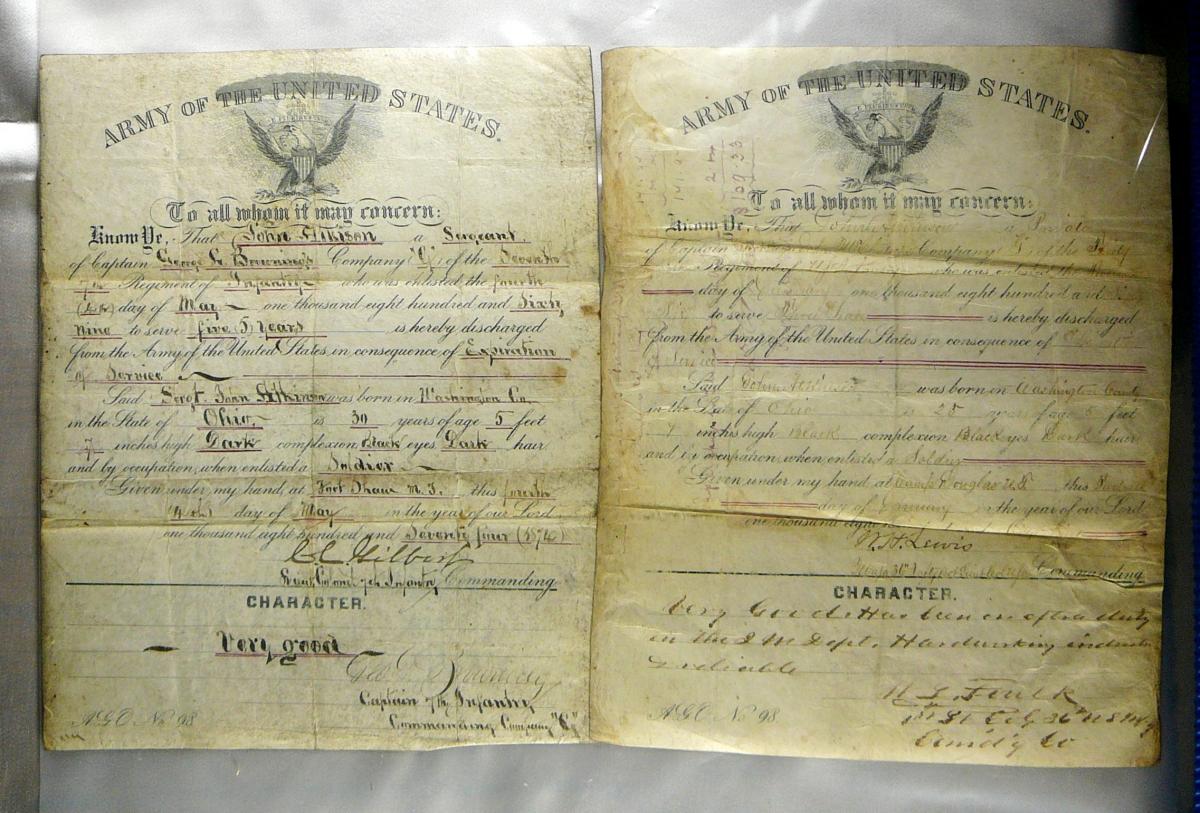 West noted that with the help of a professional genealogist, he was also able to trace information about the service of John Atkinson’s two brothers, who also enlisted in the Union Army. Frederick Atkinson, John’s younger brother, served in the Civil War as well. He was captured in 1864 and held for 10 months in a Confederate prison. Fred was never classified as “black” by the military. John’s older brother, James Patterson Atkinson, served from 1863 to 1865 as a soldier in the California Cavalry, Co. I. His Army documents label him as “dark complexion.”

“John truly deserves to be thought of as a common-man hero,” West said. “He was assigned to regiments and companies known for being in many fierce battles in which tens-of-thousands of men died over the years. This was one brave and lucky soldier who served our country for decades.”

Researchers can find military service records at the National Archives.