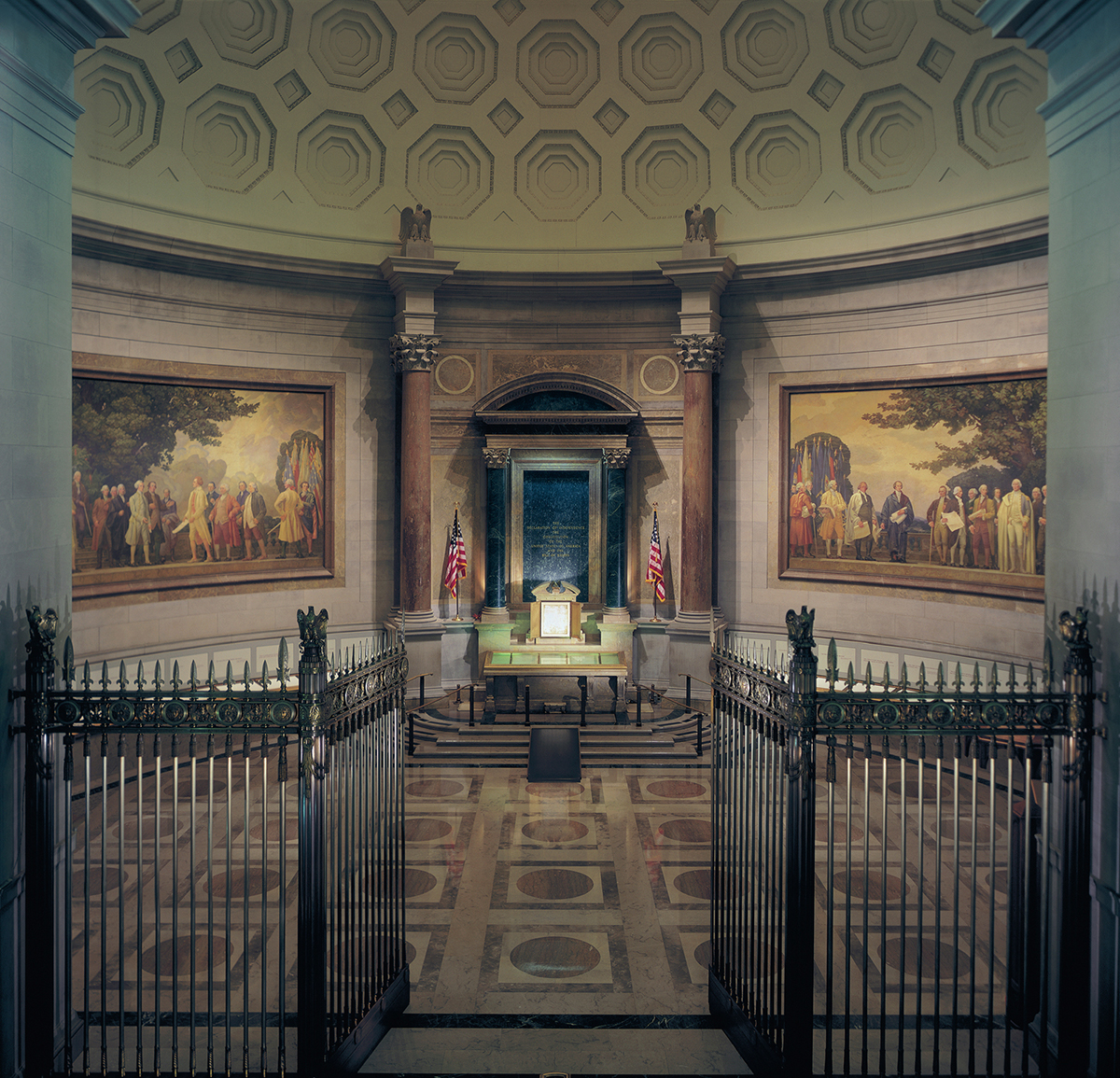 The Rotunda of the National Archives Building before renovation. (Photo by Richard W. Smith)

For more than six decades, the National Archives and Records Administration has been the repository and guardian of the records of the American people. Starting with the famous Charters of Freedom— the Declaration of Independence, the Constitution, and the Bill of Rights— NARA's holdings document the rights of American citizens, the actions of federal officials, and the national experience.

Every year, nearly a million visitors from around the world come to the historic Rotunda of the National Archives Building in Washington, D.C., home of the Charters of Freedom; thousands more research their nation's history or their own in our nearby research areas.

Now, the Rotunda and the landmark building are undergoing a major renovation funded by Congress that will result in state-of-the-art public exhibit space, an upgraded and expanded research facility, and long-needed physical upgrades building-wide.

Although the Rotunda area will be closed for about two years, starting July 5, 2001, NARA's research facilities will remain open throughout the renovation.

But what is also being constructed—along Constitution Avenue and in cyberspace—is a new environment for visitors from near and far: a "National Archives Experience." In it, history can be brought to life, and Americans can view the documents that keep them free—everything from historic parchments to films and tapes and even email.

The "National Archives Experience" will celebrate the millions of ordinary Americans whose lives are documented in census files, passenger arrival lists, land warrant files, and military service records—affording the same respect to the common citizen that our presidential libraries confer on our national leaders. While the new exhibit space will have its roots on Constitution Avenue, through the power of the Internet it will take this story around the globe.

First of all, America's "crown jewels," the Charters, will have an enhanced setting in a redesigned Rotunda after they receive conservation treatment and are placed in new, state-of-the-art encasements. The new exhibit space in and around the Rotunda will include:

"We are creating a new NARA experience," says Marvin Pinkert, director of museum programs for NARA. "It will give our visitors both in Washington and on the web a deeper understanding of the importance of ready access to essential evidence."

"NARA plans to create a world-class destination for visitors interested in American history and government," Pinkert explains. "We will accomplish this by complementing documents with media presentations and transforming two-dimensional pages into compelling multisensory experiences." For example, multimedia presentations will draw a sharp, dramatic contrast between the "official papers" of a totalitarian society that are used to track, discriminate, or intimidate the populace and America's traditions of using government records as a means to secure rights and hold public officials accountable.

The "National Archives Experience" will feature:

In the new exhibit space, visitors will get an insider's view of what it takes to maintain more than four billion pages of government records. Here, NARA's documents will be put into action as visitors gain hands-on experience with investigating war crimes, declassifying secrets, reconstructing historical events, and finding personal roots. The new exhibition space will feature:

Inside the Rotunda, the renovation will bring important changes. The most striking will be the changes associated with the Charters. When the re-designed Rotunda is opened, all seven pages of the Charters, including all four pages of the Constitution, will be on permanent display in new encasements.

The Charters project began when NARA discovered signs of deterioration on the inner surfaces of the glass of the 1952 encasements. Although there was no visible evidence of damage to the documents, there was concern that prolonged contact between the parchment and the glass could be harmful. After consultation with glass and preservation experts, NARA decided on new encasements.

The parchments on which the documents are written were found to be in good condition. The text is legible, despite some ink loss and flaking, which occurred as a result of handling over many years before the documents came into NARA's custody. NARA conservators reattached loose flakes of ink to the parchment to assure that no further ink loss occurs. (Read more about the conservation effort in Fall 2000 Prologue.)

The new encasements, which look like large, deep picture frames, are to replace smaller ones made in 1952. The new cases are being constructed and tested by the National Institute of Standards and Technology and are made of titanium, with 24-karat gold plating in keeping with the décor of the Rotunda. Each encasement will be mounted on a stand whose height and angle have been carefully planned to accommodate people in wheelchairs.

While the Charters are being re-encased, the deteriorating murals that form a backdrop for them will also be repaired. Painted by Barry Faulkner in 1936, the murals depict James Madison presenting the final draft of the Constitution to George Washington and Thomas Jefferson presenting the Declaration of Independence to John Hancock. Both pieces—each twelve feet high and thirty-five feet long—have deteriorated and buckled, due to humidity, over the years.

The murals will be removed from the walls and transported to a laboratory, where they will be relaxed and flattened. The surfaces of the murals will be cleaned, and some mending will refresh their appearance. A ten-inch-wide, U-shaped cut in the Declaration of Independence mural will be retouched. A wax resin adhesive, applied to the back of the canvas, will act as an buffer between the canvas and the wall, supporting the mural and facilitating removal in the future.

The renovation plan also calls for a large space for a permanent exhibit that will provide context for the Charters, to be located behind and on each side of the Rotunda. An area for changing exhibits will be located in the southwest corner of the building, adjacent to the Rotunda.

A new area for outreach activities conducted by National Archives volunteers will be located next to the new exhibit areas and the Rotunda. These activities will include interactive and document-based electronic workshops for groups of up to thirty students. Five conference rooms will be available, two of them outfitted for distance-learning outreach activities using videoconferencing equipment. These changes will enable NARA to regularly schedule conferences and training in the building.

A new Genealogy and Community History Research Center will be built on the ground level just inside the Pennsylvania Avenue side of the building. Researcher registration and consultation will be located immediately behind the existing elevators near the Pennsylvania Avenue lobby. All researchers will first come to this area for researcher cards or help with their research projects.

Researchers using textual pension records or microfilm will stay on the ground level to use the new Pension Records Research Room and the enlarged Microfilm Research Room, which will be able to handle the largest summer crowds. The new center will bring together in one convenient location resources that had been spread throughout the building: NARA's library, a genealogy orientation center, a consolidated finding aids room, a publications sales area, lockers, restrooms, an electrostatic copier area, cashier, and an archival holding area.

The renovation, however, will affect the entire building—including staff work areas and the stacks where centuries-old records are stored. Work will include upgrading mechanical, electrical, plumbing, and fire safety systems; fully complying with the Americans with Disabilities Act; and improving storage conditions to meet modern archival standards.

The "National Archives Experience" is to be a public/private partnership designed to bring history to life by offering enriching educational experiences centered on NARA's holdings—the world's greatest treasure trove of documents.

Although Congress has generously provided funding for the renovations and the new encasements for the Charters, NARA must look to its private supporters for help in creating the "National Archives Experience." To find out how you can help, call NARA's director of development, Naomi Revzin, at 1-888-809-3126, or go to our special Charters site on the Internet.