A Top-to-Bottom Renovation for the National Archives Building 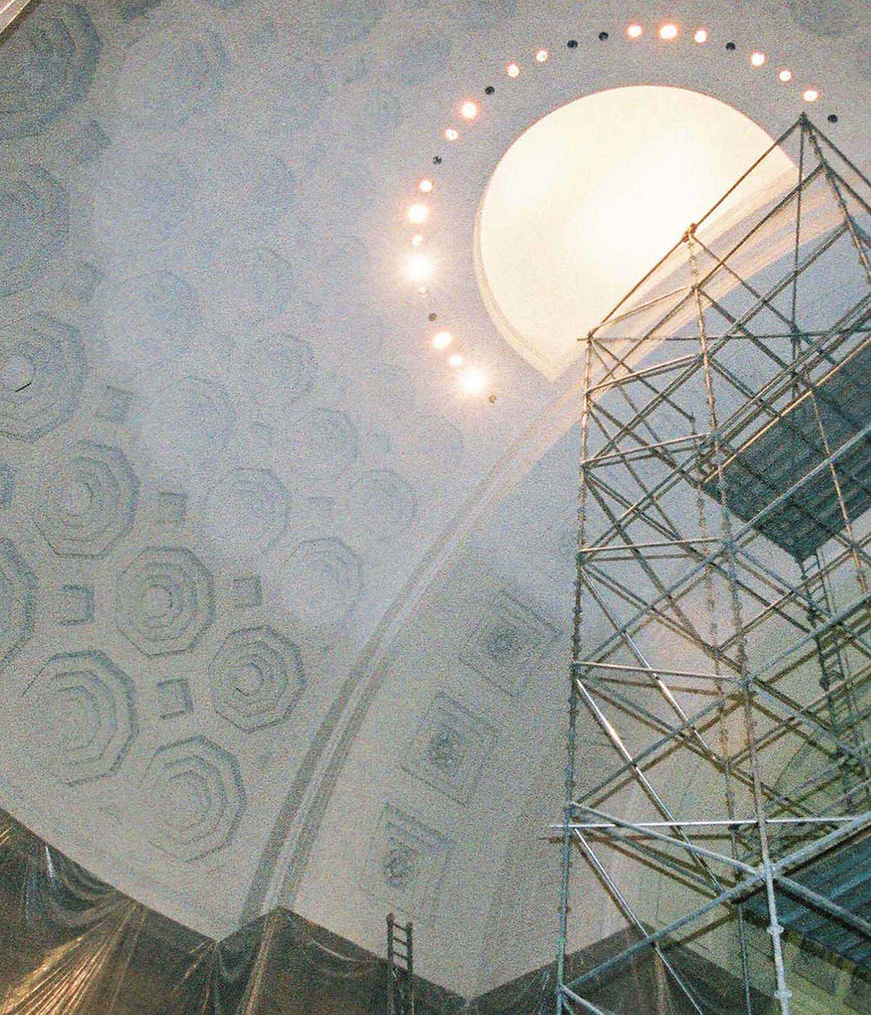 This picture of the Rotunda taken during repainting in September 2002 shows the contrast between the new and old paint.

Millions of visitors from all over the world have stepped onto its marble floors to view America's most well-known documents—the Declaration of Independence, the Constitution, and the Bill of Rights—in one of the most awe-inspiring settings in the nation. Legions of researchers have used the records housed there. Presidents have passed it on their inaugural parades to the White House.

It is the National Archives Building, a stately structure along the Mall in Washington, with giant Corinthian columns, forty-foot bronze doors, statues of heroic seated figures, and various inscriptions, including "What is past is prologue."

A top-to-bottom renovation of this historic building, constructed during the Great Depression and altered little since then, is now in its final stages. The $110 million renovation, upgrading and updating the building from roof to subbasement, will transform it into a modern visitor attraction and twenty-first-century facility for those who want to research the history of America or their own family. While the renovation is extensive, the esteemed spaces for which the building is most known retain their historic character.

The renovation affects virtually every part of the building, designed by the eminent architect John Russell Pope and built during the 1930s. It opened in 1935, before most of the stack areas were complete, and began receiving the historically important records of the U.S. government.

The most noticeable result of the renovation is the effort to bring the public areas of the building into compliance with the Americans with Disabilities Act and the Uniform Federal Accessibility Standards, which apply to all federal facilities.

To that end, the renovation includes new street-level entrances on the Constitution Avenue side of the building that lead to a new lobby, where one can take elevators to the Rotunda (one floor up) and Theater (one floor down) levels. In the Rotunda, the Declaration, the Constitution, and the Bill of Rights (collectively known as the Charters of Freedom) are in new display cases easily viewable by all visitors, including small children and those in wheelchairs. A number of large restrooms have been added.

The building's systems—plumbing, electrical, ventilation, heating, and air conditioning—have been replaced or upgraded so they comply with applicable building codes and meet current and future needs. Safety and security have been improved for the documents housed in the building, the National Archives and Records Administration (NARA) staff who work there, and visitors who come to see exhibits or conduct research. Fire safety issues have been resolved. Environmental storage conditions in the records stacks have been improved.

Hartman-Cox Architects, Inc., created the renovation design fully aware that the National Archives Building is a masterwork in the landscape of America's architectural heritage. New spaces were designed to complement the original spaces conceived by architect Pope.

One area of the Rotunda has been restored to its original Pope design using rare marble from the same quarry used during original construction in the 1930s. Untouched since that time, it matches the marble that was already in place in that area of the Rotunda.

New interior grand stairs harmonize with original marble stairs in the Pope portion of the building. These stairs, along with new elevators and street-level entrances on the Constitution Avenue side of the building, make it no longer necessary to ascend the outdoor Grand Staircase, providing the required accessibility in a manner that carefully blends new spaces with those Pope designed.

The first phase of the renovation was done through the general contractor John C. Grimberg Company, Inc., from 2000 to early 2001. The company's work involved building new office space in what were once outdoor "moat" areas along the northeast and northwest corners of the building and beginning the process of providing greater electrical supply to the building. Phase two encompasses the major portion of the renovation activity and is being skillfully conducted by general contractor Grunley Construction, Inc.

Rotunda visitors will notice many improvements to the space where the Charters of Freedom have been displayed since 1952, all with the approval of the State Historic Preservation Officer for the District of Columbia, the Historic Preservation Review Board (a D.C. entity), and the Advisory Council on Historic Preservation (a federal entity). Although not required by regulation, the U.S. Fine Arts Commission was also given opportunity to review and comment on the Rotunda plans.

The Rotunda dome has been cleaned and painted and is lit with fiber-optic lighting. Beneath it, the majesty of the room has been maintained while providing access to visitors in wheelchairs. Steps that once stood at the foot of the Charters of Freedom display area have been removed. New display cases make it possible for children and those in wheelchairs to easily see the documents, which are lit from within the display cases with fiber-optic lighting designed by BAND, Inc. And for the first time, all four pages of the Constitution, not just pages 1 and 4, will be on permanent display with the Declaration and the Bill of Rights.

Within the display cases, the Charters of Freedom are contained in new air-tight, state-of-the-art encasements fabricated by the National Institute of Standards and Technology. Diebold, Inc., provided a new security system and a million-dollar donation of material and labor. HK Systems, Inc., provided essential equipment to support this effort.

On the walls of the Rotunda are the restored murals painted by Barry Faulkner and first installed in 1936—one depicting the presentation of the Declaration of Independence, the other the presentation of the Constitution. They were removed for the first time for conservation in December 2001 and reinstalled a year later. The murals work was directed by the Atlantic Company of America, Inc., teamed with Olin Conservation, Inc., and UBS, Inc., the scaffolding contractor that also constructed the highly acclaimed Washington Monument scaffold. The murals work was supported in part by a grant from Save America's Treasures through a partnership between the National Endowment for the Arts and the National Park Service. Gifts also came from the John S. and James L. Knight Foundation and the Bay Foundation. For details concerning the murals work, see Spring 2003 Prologue.

To see the Charters of Freedom as well as permanent and special exhibits, visitors ascend one level from the street entrance to a new lobby. From there they enter the Rotunda through a new opening in the wall beneath an original niche that now forms an elegant top to the doorway. A mirror-image opening on the opposite side of the Rotunda is the exit to the elevators and stairs that lead down to the new Archives Shop and street exit and continue on to the lower level.

Also on the Rotunda level are new exhibit display spaces, areas designed for use by group tours, a resource center for educators and parents, conference rooms, restrooms, and water fountains.

On the lower level, beneath the Grand Staircase, will be the new 294-seat William G. McGowan Theater. It is named for the late founder of MCI Communications, Inc., in recognition of a five-million-dollar gift received from the William G. McGowan Charitable Fund. Also on this level will be a new café.

The renovation of this historic structure, begun at the end of the twentieth century, brings it into the new century, poised to continue to make available—in a new setting, and in new ways—the records of the nation's history and the lessons of the past to many new generations of Americans.