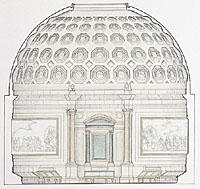 Architect's rendering of the Rotunda of the National Archives Building. (Hartman-Cox Architects, Inc.)

On December 15, 1952, our nation's Charters of Freedom—the Declaration of Independence, the Constitution, and the Bill of Rights—were officially enshrined in the Rotunda of the National Archives Building in Washington, D.C. For nearly five decades, the Charters remained on exhibit in the Rotunda so that millions of people could see for themselves the carefully penned words that founded our nation and our democracy.

President Harry Truman stood by the Charters of Freedom that winter day in 1952 and said, "We are engaged here today in a symbolic act. We are enshrining these documents for future ages. . . . This magnificent hall has been constructed to exhibit them, and the vault beneath, that we have built to protect them, is as safe from destruction as anything that the wit of modern man can devise."

While President Truman was right, the "wit of modern man" has now devised something better, and the Charters will soon be housed in new encasements designed to better protect them. Within these new encasements, the enduring words of the eighteenth century will meet the technology of the twenty-first century, as sophisticated monitoring systems will allow conservators to periodically check the condition of the parchments, and the sealed cases will provide a stable environment for the precious documents.

On July 4, 2001, thousands of people came to view the Charters just as they had been enshrined in 1952. When the last visitors had gone, the Rotunda was closed for renovation, and the Charters of Freedom were secured in their underground vault for the last time. A few days later, these precious documents were transferred to a laboratory for conservation treatment and re-encasement.

Our conservators have worked carefully to conserve the Charters. For example, they have painstakingly examined the ink—letter by letter—to look for lifting flakes of ink and applied minute drops of a parchment gelatin adhesive to reattach insecure flakes. Further work included relaxing the parchment to soften distortions and return the parchment to a flatter state. Old tears were cleaned and mended with stable materials, and dirt and other foreign substances were removed. Finally, the pages were placed in their new state-of-the-art encasements, ready to be returned to public display in the newly renovated Rotunda.

The celebration of the return of the Charters will begin on Sunday, September 14, when NARA will host family activities on the steps of the National Archives Building. The public is welcome.

Constitution Day, September 17, will be a historic day as the newly renovated Rotunda is rededicated and the Charters are unveiled in a special private ceremony that will include top officials from all three branches of the federal government.

At 10 a.m. the next morning, we will once again open our doors to the public so that anyone who wishes can see the parchment of the Declaration once held by Thomas Jefferson, the signatures penned by the Founding Fathers to ratify the Constitution, and the exact words that spell out our rights as Americans.

For the first time in history, all four pages of the Constitution, as well as the Declaration of Independence and the Bill of Rights will be on permanent display. The new exhibit will also make the documents more accessible to younger visitors and those using wheelchairs.

Visitors to the Rotunda will also once again be able to see the two murals, created by artist Barry Faulkner in 1936, that depict the presentation of the Declaration of Independence and the Constitution. Thanks to $2.2 million of private dollars donated for much-needed careful cleaning and restoration work, the paintings will have a new look.

We will be open from 10 a.m. until midnight September 18–20, with special evening entertainment and musical performances. On September 21, we will return to our normal operating hours of 10 a.m.–5:30 p.m.

The weekend of our re-opening will also be filled with special programs and activities for families designed to promote NARA's education programs and encourage learning about the Charters through hands-on activities, including programs developed in coordination with the annual Washington, D.C., Arts on Foot Festival.

We are excited to bring the Charters of Freedom back to public display because these documents are uniquely American; they are the very foundation of our country and our government. On these pages, our Founding Fathers captured the dreams and spirit of the new nation as they crafted a fledgling democracy designed to endure for generations to come. We are also excited because the return of the Charters is also the kickoff to our new National Archives Experience.

As I have previously mentioned in this space, the National Archives Experience is in essence a journey—a journey through time, and a journey through American struggles and triumphs. The Charters of Freedom in the Rotunda will be the core of the Experience.

The National Archives Experience will continue in the Public Vaults, interactive exhibition spaces that will convey the feeling of going beyond the walls of the Rotunda into the stacks and vaults of the National Archives. In the central corridor of the Public Vaults will be the Record of America, which will explore the transformation of records, from our earliest Native American treaties all the way to presidential web sites.

The Public Vaults are slated to open to the public in the fall of 2004. Other components of the National Archives Experience, which will be rolled out in the months to come, are a new 294-seat Theater, a Special Exhibition Gallery, and a Learning Center.

It is our intent that visitors leave the National Archives Experience with a new appreciation for the role that records play in our society. If you are in the Washington, D.C., area, I hope you will join us as we rededicate the Charters of Freedom, for just as these documents connect us to beginnings as a nation, they also guide our collective path to the future. As these most precious records show us, records matter—for us, for our future, and for the future of our democracy.