There's a NARA Near You! Exploring the Regional Archives

Buffalo Bill Cody and Billy the Kid are corralled in Denver.

The "Birdman of Alcatraz" is incarcerated in San Francisco and Kansas City.

Elvis and Richard Nixon serve together in St. Louis.

At 14 regional archives throughout the country, you can encounter some of the most famous (and infamous) names in American history. Their records are found among 650,000 cubic feet of material—nearly one-quarter of the total holdings of the National Archives—available for use by the public outside the Washington, D.C., area.

Nevertheless, the regional archives may be the best kept secret of the National Archives and Records Administration (NARA).

Particularly prominent among the regional holdings are records of the U.S. district courts and appeal courts, the Army Corps of Engineers, the Bureau of Indian Affairs, the Bureau of Customs, and naval districts and shore establishments. Many facilities have naturalization records, ships' passenger arrival records and indexes for vessels arriving at various U.S. ports, military service and pension records, and land records.

For example, federal population censuses for all states, 1790–1930, are available at all regional locations except St. Louis. The St. Louis regional archives just opened in June 2005. It is a special archives that holds 1.5 million Official Military Personnel Files (OMPFs) for Navy and Marine veterans from 1886 to 1939. Over the next six decades, the St. Louis regional archives will gradually accession 55 million more OMPFs from all military service departments.

For the public, using a regional archives can be a great introduction to the National Archives.

"I'm particularly proud of the way the staff always goes the extra mile for researchers," Sue Karren, archives director for the Pacific Alaska Region (Seattle) noted. "There are some stories that touch the heart and others that make you proud of what change you can make in a person's life."

The public responds to this service. One customer reported, "A friend told me about the Philadelphia branch. I had a response to my Internet [e-mail] inquiry within one day. I was thrilled. The archivist was friendly and thorough."

Thomas Hayes, archives aid in the Great Lakes region in Chicago, instructs a researcher on the use of the 1900 census finding aid. (Photo by Mary Ann Zulevic)

Research requests can be about anything. Common requests relate to genealogy or to research being conducted by authors and historians. Because of the wide-ranging topics of requests and the relatively small number of staff in each region, staff members in the regional archives tend to be generalists rather than specialists.

"Regional archivists have to be flexible," said Karren. "While we are generalists in a broader sense, our region has specialists in local history and in our knowledge of the holdings of other archival facilities in the region. Versatility is the hallmark of regional service."

Authors use regional archives records to produce a variety of books, articles, and dissertations. Archivist Rives has worked with numerous authors, most recently Geoffrey Ward, who writes screenplays and companion books for Ken Burns's Florentine Films.

"I provided him copies of documents from our Bureau of Prisons holdings for his Jack Johnson biography," Rives said. "It is always fun to be part of the process, especially when it is for such a high-profile project."

The impact of these publications is felt long after they have appeared in print. Archivist Eric Bittner of the Rocky Mountain Region (Denver) recalled a recent letter received from the daughter of one of the Heart Mountain draft resisters who wrote to say she had seen a Prologue article on Japanese relocation camps.

"A quote in the article taken from court exhibits was a statement by her father," Bittner said. "The researcher said that this part of her father's life was largely unknown in the family, and it was an obvious source of pride to read her father's words in the court case file housed in the Rocky Mountain regional archives."

One of our first research efforts after we opened was helping a woman obtain Medicare benefits for her dying father out in a little village in the Aleutians. For years, this woman had been unable to provide any documentation that her father really existed.

One day, a federal colleague pointed her our way. We found a Bureau of Indian Affairs census of the village that showed this man as a child. A certified copy was all that was needed for Medicare. Helping a respected academic research a book or scholarly article is fun and rewarding; helping a Native Alaskan navigate the maze of government recordkeeping to obtain his rights is even better.

In addition to professional staff members, many regional archives also make extensive use of volunteers. The volunteer program at the Central Plains Region (Kansas City) was one of the first.

"In 1983, when we started the volunteer program, we were not certain how many volunteers we would attract," recounted archival director Diana Duff. "However, the word went out, and we had 15 volunteers the first year and built up to 53. Today, the volunteer program remains very much alive. Volunteers are vitally important to our ability to assist patrons and reach out to the entire region."

Fifty-eight volunteers help to staff the Northeast Region (Pittsfield). Archivist Jean Nudd explained, "Our microfilm holdings focus on genealogy, so our holdings cross regional lines. Our volunteers will help genealogists who can't visit our facility, by researching any of our records that are indexed."

One challenge that staff at regional archives face is educating the public about the records that are available.

"A lot of people think they can get all of their genealogical information off the Internet these days," Mary Burtzloff, an archivist at the Central Plains Region said. "They don't realize there's so much more in original records that they can get in a repository like this."

In response to this challenge, regional archives offer to the public a wide array of educational programming. Public programs include genealogy workshops, research seminars for new and experienced users, teacher training on using archival documents, student programs, tours of the facilities, student internships, exhibits, and lectures.

The regional archives often partner with colleges and universities, historical and genealogical societies, museums, and other archives for the advancement of research and public education. The Great Lakes Region in Chicago partners with the Chicago Historical Society to host an annual Civil War Symposium and Reenactment.

In 2002 the Pacific Region (San Francisco) joined with 12 organizations to present "Reclaiming the Legacy: Asian Americans and Pacific Islanders in U.S. History," one of the largest symposiums ever produced by the National Archives.

Last year, the Southeast (Atlanta) and Mid Atlantic (Philadelphia) regions teamed up with the National Constitution Center and the Atlanta Public Library to offer a distance learning workshop on the Supreme Court's Brown v. Board of Education decision. The workshop was attended by hundreds of schoolchildren in the two cities.

Regional archives facilities often offer small exhibits that are free to the public. The Great Lakes Region (Chicago) developed an exhibit to celebrate the 100th birthday of Johnny Weissmuller, the most famous portrayer of Tarzan. The Mid Atlantic Region (Philadelphia) recently opened a special exhibit in conjunction with the 50th anniversary of the Brown v. Board of Education decision.

Staff of the Southeast Region (Atlanta) are partnering with the Martin Luther King, Jr., National Historic Site and other local cultural institutions on exhibits to commemorate the 40th anniversary of the Voting Rights Act (2005) as well as the 100th anniversary of the Atlanta Race Riots (2006).

Dozens of documents from regional archives are part of the Public Vaults exhibit at the National Archives Building in Washington, D.C., and regional archives regularly contribute to national traveling exhibits, such as NARA's "American Originals" exhibit, which toured the country from 2001 to 2004.

Educating teachers and students is another vital and growing part of the public programming offered by the regional archives. The Northeast Region (Boston) participates in a unique program for teachers.

"In Massachusetts, teachers need to earn 150 Professional Development Points (PDPs) every five years to maintain their teaching certification," Archives Director Stuart Culy explained. "We are an accredited PDP provider for the Commonwealth of Massachusetts. Our 10-hour program encourages the use of primary sources in the classroom."

These partnerships allow regional staff to reach teachers and promote the use of primary source documents from NARA holdings at their locations. In turn, teachers are able to return to their classrooms with documents that engage their students in history, help students learn "critical thinking" skills, and promote good citizenship.

Most regions are team members in "Teaching American History" grants awarded by the U.S. Department of Education. Regional staff also assist students with primary source research as they prepare projects for "National History Day" competitions and serve as judges for local and state competitions. In April 2005 the Mid Atlantic region teamed with 30 other cultural heritage organizations to host the first National History Day competition in the city of Philadelphia in two decades.

In July 2005, the Southeast Region, the largest of the regional archives, completed a move to a dramatic new, state-of-the-art facility in Morrow, Georgia, near Atlanta. This new facility is strategically located adjacent to both the Georgia State Archives and Clayton College and State University. Archivist of the United States Allen Weinstein was on hand to greet the first researchers when the building opened in April and led the official dedication in July. 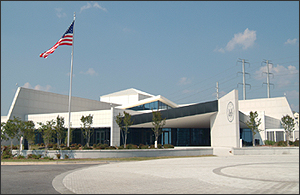 According to Tom Mills, assistant archivist for regional records services, the building is a huge success. "Research use has quadrupled; an exhibit in the lobby is attracting new visitors; community and educational groups are more eager than ever to work with us; and we are busy planning new programs and special events with our partners at the state archives and the university," Mills said recently.

"Equally important," he added, "the facility meets NARA's strict environmental standards for records preservation. Overall, it is a huge step toward renewal of the regional archives system."

The regional archives have allowed the National Archives to bring its holdings under better control and to offer better customer service to all Americans. Whether you are looking for Abraham Lincoln or your own "Uncle Abe," the regional archives are here to serve. Come see what we're saving for you!

Lori Cox-Paul is an archives specialist with the Central Plains Region in Kansas City. She holds a master's degreee in historical administration from Eastern Illinois University.

A Sample of the Names in the Records

Their stories—and those of the millions of Americans who lived and shaped this history as well—are waiting for your discovery. Visit your regional archives, and you will find the following individuals:

National Archives at Fort Worth