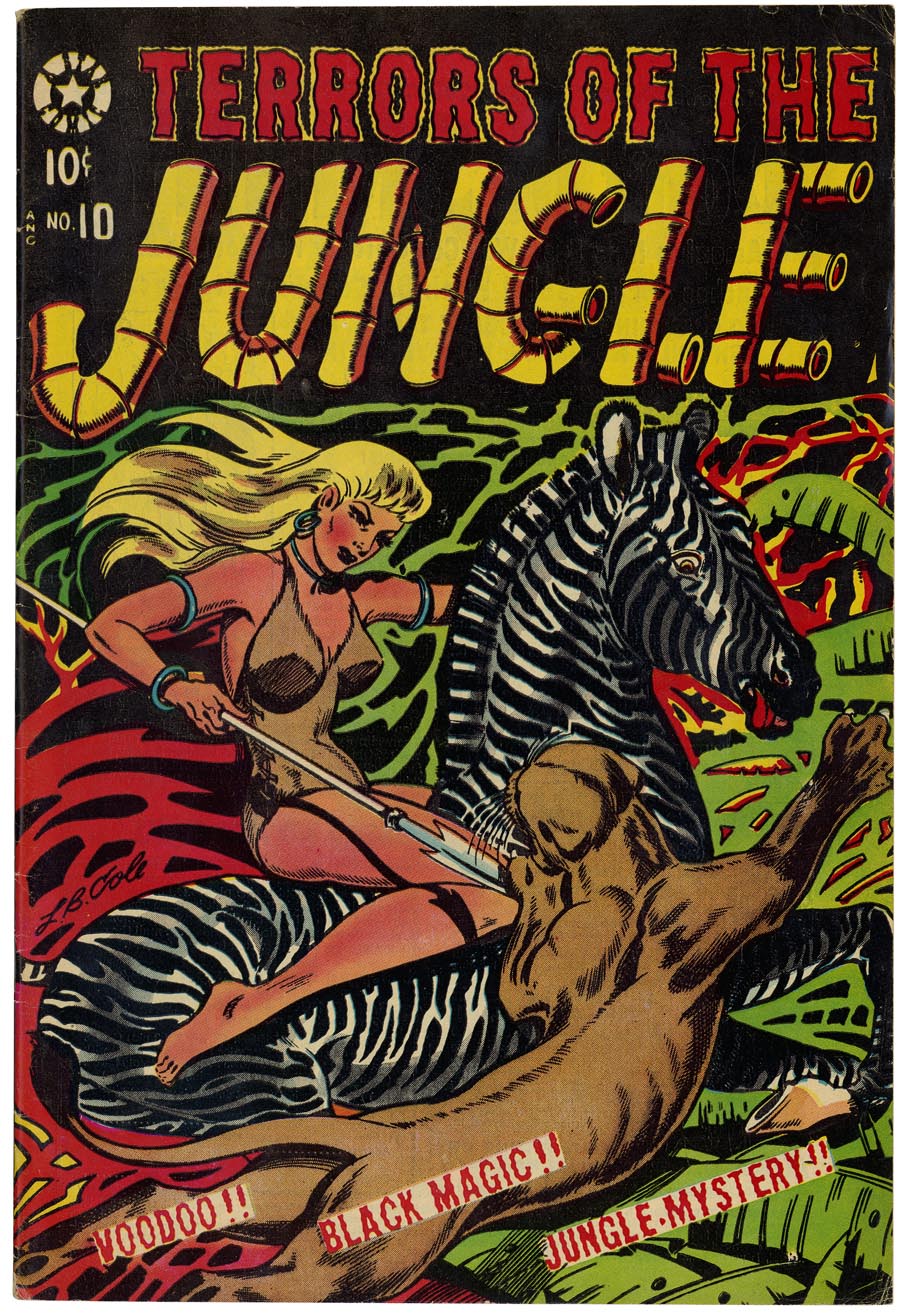 Enlarge
Terrors of the Jungle was submitted as evidence to a 1954 Senate subcommittee that examined the effects of sadistic comments on juveniles. (Records of the U.S. Senate, RG 77)

In 1954, a Senate subcommittee on juvenile delinquency met to discuss "the problem of horror and crime comic books." Over three days of hearings, numerous experts were called to testify whether comics of the day were contributing to increased violent crimes in teens. Doctors testified that "most of the children that we do see at the psychiatric services of the court are reading comic books." The New York State joint legislative committee claimed "The reading of crime comics stimulates sadistic and masochistic attitudes." Certain magazines were cataloged as examples of "disturbing" and "sadistic" comics.

Someone, or something, was to blame.

This is why the Center for Legislative Archives now holds in its records issue #1 of Mad magazine, and other comic books like Planet of Terror. They were submitted as a piece of evidence to display the corrupting characteristics inherent in the "printed poison" of comic books.

Moments such as this remain important in our American journey. The Senate may have never determined the cause of juvenile delinquency, and many Americans may not remember that comic books were ever a national issue of immorality in today's digital age. But the documents that capture this moment and the other half-billion pages of documents held at the Center for Legislative Archives are like a national diary, cataloging moments—their emotions, activities, and concerns. It's the Center for Legislative Archives' job to ensure those moments in Congress are preserved, comic books included.

Congress's memory lives in its paper trail. Before the 1930s, the trail led to obscure places in the Capitol—basements, attics, closets filled with subcommittee hearings and inaugural addresses.

It wasn't until 1937 that Senate records found a proper resting place inside the walls of the National Archives. In 1946 the House records followed suit. In this same year Congress responded to the executive branch's explosive growth during World War II with the Legislative Reorganization Act, increasing its size and, subsequently, its paperwork.

In the 1970s Congress's committee staff and workload grew again, and the National Archives began to receive much larger volumes of legislative records. Because of this influx of records and the need for Congress to have historical and contextual references when making decisions, the Archives started to take on a much larger role in the legislative branch than ever before. Early in its history the Center was considered to be little more than a warehouse, says Richard McCulley, the Center's historian. "That has very much changed."

In 1990, the Advisory Committee on the Records of Congress was created. Alternately chaired by the Secretary of the Senate and the Clerk of the House, the committee provided policy guidance to the Center and established a direct link between the Capitol and the National Archives, illustrating the importance of the Center as an archives to Congress.

Over time, the congressional paper trail has moved from parchment to paper and, more recently, into the digital realm, and with it the Center has evolved as well. It now works with Congress to ensure the transition to a more digital archives is a smooth one.

Whether in print or on screen, the Center remains an essential stop for researchers and members of Congress alike. Recently, it has focused on providing descriptions and products on a historic commission that may provide some context to the current struggling economy: the Pecora Investigation of 1933–1934 that looked into the causes of the Great Depression and informed New Deal banking and financial regulation. 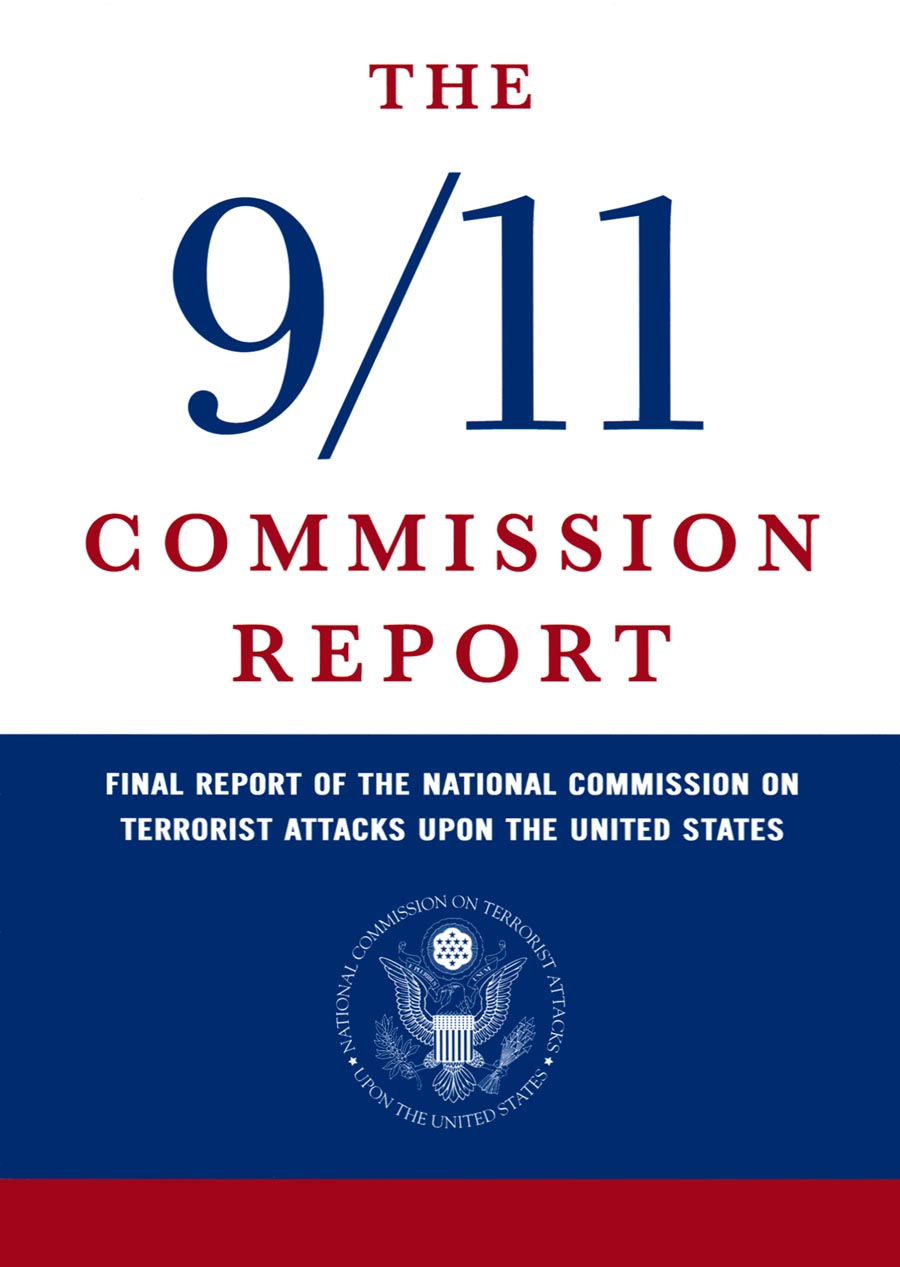 Enlarge
Since the closure of the 9/11 commission, the Center for Legislative Archives has opened about 35 percent of the commission s records, much of which is online.

It's also busy handling the most significant independent committee investigation in the past decade: the 9/11 Commission. Since the commission's closure five years ago, the Center has been hard at work cataloging and releasing its records. About 35 percent of the records are currently open, and much of it is available online. Release of the remaining documents is dependent on National Security interests and other standing confidentiality agreements.

These commissions represent a sliver of what the Center holds. As Congress's paper trail extends into the 21st century, the Center collects, and its archives just keeps growing.

Half a Billion Papers and Counting

Handling congressional papers is no easy task. While presidential libraries maintain a relatively static collection, the Center for Legislative Archives’ holdings increase every time Congress passes a bill, discusses proposed legislation, confirms a presidential appointee, or does anything at all.

When the House closes its congressional sessions every two years, all the House's related documents—paper or otherwise—are organized, held on site for four years, and then shipped to the National Archives Building for storage.

The Senate delivers the boxes in accessions sporadically. "Accessions can vary from a box to 300 boxes" explains Matt Fulghum, the Center’s assistant director, adding that the Center receives "four or five hundred accessions in one year."

More than 13 million pages will arrive this year, says Richard Hunt, the Center's director. "From the 1980s up to the present, our holdings of House and Senate records have been doubling every 10 to 15 years," a nearly incomprehensible amount considering the Center currently has a half-billion documents to track, enough to circle the globe three times, if one laid the pages end-to-end.

As if organizing and storing these documents weren’t difficult enough, the Center's team has 24 hours to fill requests from committees. They made 187 of these loans—totaling more than 1 million pages—in fiscal year 2008 alone. And that’s not all.

"We are a repository of last resort," McCulley says. If a researcher can’t find a government publication, "they come to us because we have a copy of the records." It's the GPO, after all, that prints all the government's publications, and so it's the Center's job to preserve them, all 31,400 square feet.

This is part of what makes the Center such a treasure trove for researchers. Balancing its obligations to Capitol Hill, the Center's 20-person staff also retrieved more than 3,500 items in its holdings for researchers in fiscal year 2008. According to McCulley, the research is as "diverse as the holdings" themselves.

That there are any records to study is something of a miracle.

Before 1800, Congress met in eight separate places in four separate states, each time shipping written records by barge or horse before finally settling in Washington, D.C.

In 1814, when the British army burned the Capitol, Senate Clerk Lewis Machen had to commandeer a wagon to evacuate the young Senate's records. The House was less fortunate: many of its petitions and documents burned.

Maintaining the documents was a less dramatic ordeal after 1814, but no less trying on the records themselves. Documents were stored wherever clerks could find space. Parchment decayed. Mice made meals out of hearings on bills and amendments. Mold settled in. Heat made Constitutional proceedings brittle. 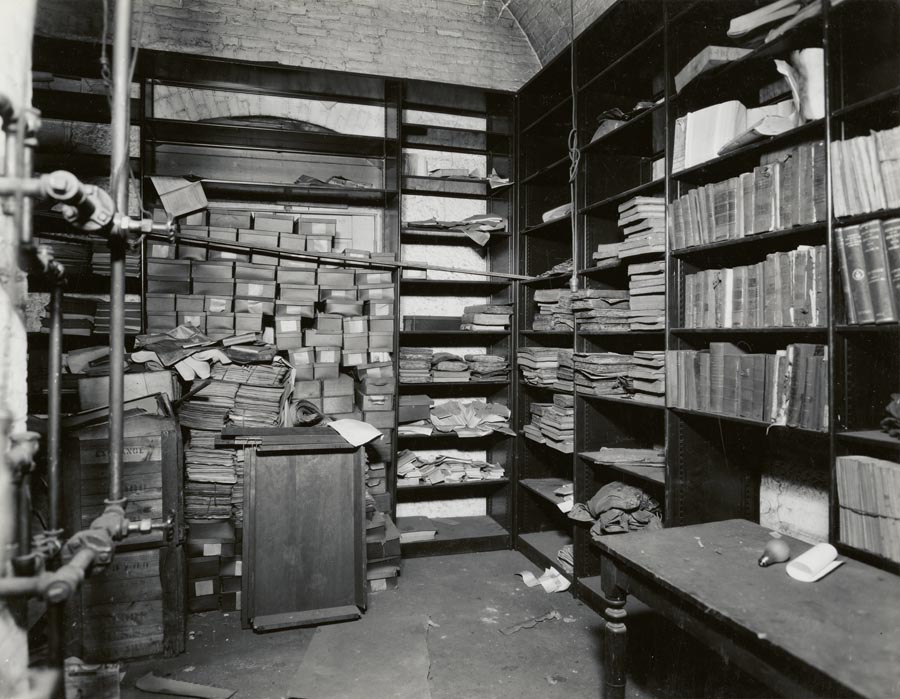 Enlarge
Before 1937, legislative records were kept wherever clerks could find room, such as the attic of the Senate wing of the Capitol. (64 NAD-171-PR)

It wasn't until 1927 that an exhaustive effort was made to catalog the Senate holdings. Harold Hufford, then a young Senate file clerk, found the Senate records scattered across 50 separate locations throughout the Capitol. When the Archives building prepared to receive the documents 10 years later, Hufford was ready. He later became the first director of the legislative section of the National Archives, working to ensure easy access for the legislative body to its own body of work.

Though much of the Center's records remain closed to researchers—unpublished records of the House are closed to the public for 30 years, unpublished Senate records are closed for 20—the Center remains a significant collection of American history.

Called "perhaps the most valuable collection of records in the entire government" by one of the original examining archivists in 1937, the collection is unique in touching nearly every aspect of American history. "We hold the records of the only representative branch of the federal government," explains Hunt.

"Congress deliberates on everything," and all those paper trails lead to the Center, McCulley adds.

"Everything" is not an understatement. Apart from Franklin D. Roosevelt's "Day of Infamy" speech, or George Washington's inaugural address, there are the more obscure documents that just as well provide a glimpse into an American moment. 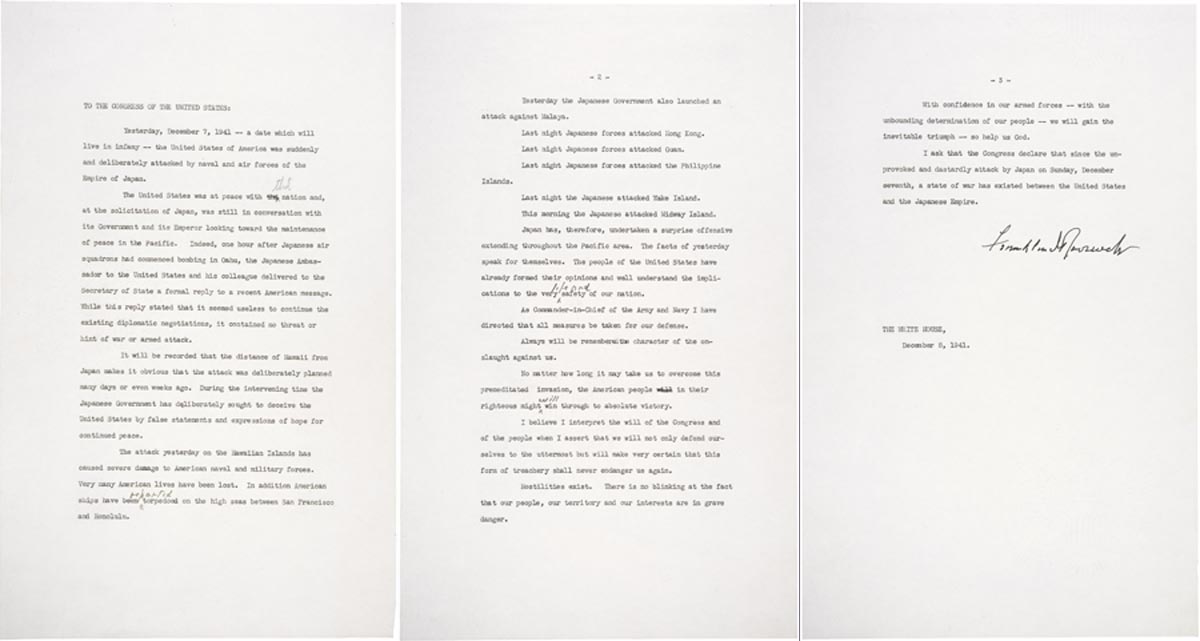 Enlarge
Long thought lost, the copy of the Day of Infamy speech Franklin Delano Roosevelt used while addressing Congress and the nation following the bombing of Pearl Harbor was later found in legislative records. (Records of the U.S. Senate, RG 77)

When Hunt searched through the House stacks years ago, he found a letter from a doctor to a member of the House. The doctor, who was observing the House in session, noticed one of its members had a horrible cough and had enclosed a modern-medical cold remedy for the congressman: opium.

It was inside a little folded piece of paper in the envelope, Hunt recalls. "I called security."

Fulghum once found cigarettes folded inside a letter to a congressman. It was from a soldier serving in the Far East during World War II who thought the Army's rationed cigarettes were subpar. "You try to smoke this!" the letter read.

There is even a secret journal of the House locked away in the stacks. Hunt notes that the only secret communiqué in it is an 1803 letter from Thomas Jefferson to Congress requesting funding for a politically sensitive expedition to the west: the Lewis and Clark expedition.

Together, this is what makes the Center a unique refuge for American history: it captures moments in American history as they played out in Congress—what concerned the nation, what its priorities were, how Congress intended to resolve issues.

The Senate Subcommittee on Juvenile Delinquency, after its hearings on comic books and submitting as evidence issue #1 of Mad magazine, released its interim report. "Majority opinion seems inclined to view that it is unlikely that the reading of crime and horror comics would lead to delinquency in a well-adjusted child and normally law-abiding child," the finding shows.

It appears that horror and crime comics were in the clear. But as the report continued, the Senate observed that if comics weren't causing teen crime, they may be guilty of something else. "There is evidence that comic books are being utilized by the U.S.S.R.," the report reads, "to undermine the morale of youth in many countries by pointing to crime and horror . . . as one of the end results of the most successful capitalist nation in the world."

This was in 1954, when America was gripped by fears of communist influence in government and everyday American life. These sentiments, written into the American diary, are now preserved for generations in the Center's holdings, so America never forgets its past as it steps toward its future. 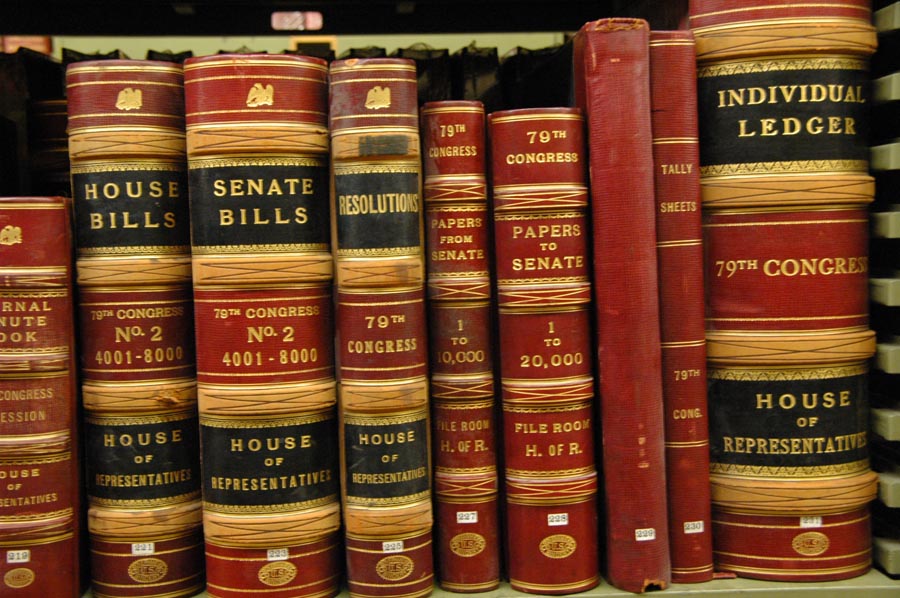 The Center for Legislative Archives preserves moments of congressional history, some well known, some hidden under the remains of lengthy proceedings and thick bills. Here are a few of the lesser-known facts about the legislative branch.