By Neil Carmichael and Brewer Thompson

Fifty years ago, talks between the United States and the Soviet Union broke down over the status of Berlin, capital of the defeated Nazi German state.

A Department of State memorandum of April 13, 1961, summarized a meeting with the President on contingency plans in the event of a blockade of Berlin. The President was concerned about commitment and concerted action â€”how the United Kingdom, France, and West Germany, as well as the United States, would respond to the pressures which may arise. Memo of Conversation re: Berlin Contingency Planning and Related Matters, April 13, 1961; Policy Planning Council; Subject Files, 1954—1962; General Records of the Department of State; Record Group 59. 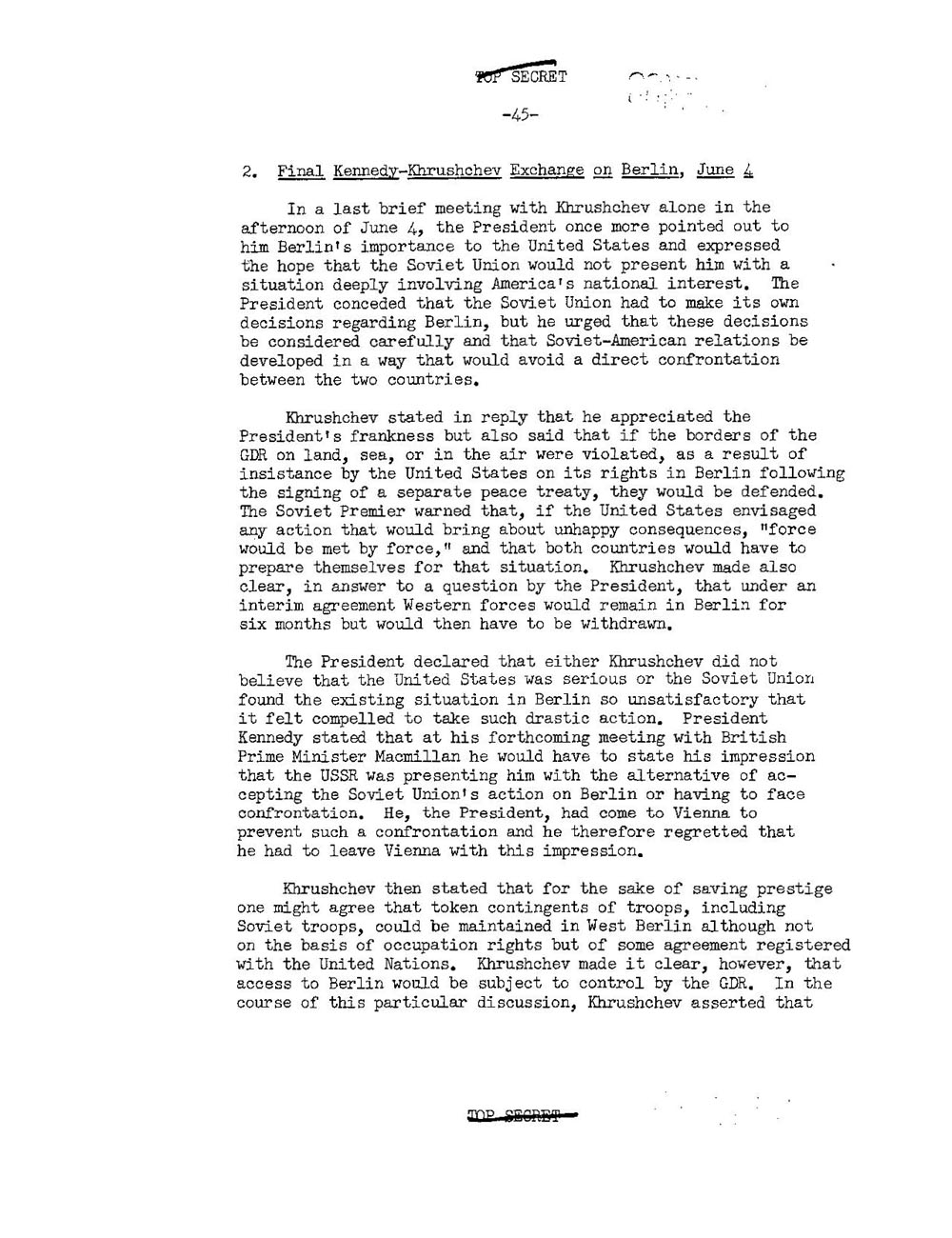 A State Department analysis of the June 4 Kennedy-Khrushchev meeting reported on the Soviet premier s hard stance, that his nation would defend any violation of the German Democratic Republic s borders on land, sea, or in the air, thus cutting access to West Berlin. Kennedy responded that the USSR was presenting him with the alternative of accepting the Soviet Union s action on Berlin or having to face confrontation. United States Department of State. Historical Studies Division (February 1970). Crisis Over Berlin, American Policy Concerning the Soviet Threats to Berlin November 1958—December 1962. Part V. Developments in the Early Phase of the Kennedy Administration and the Meeting with Khrushchev at Vienna, January—June 1961 (Research Project 614-E). Washington, D.C.

At the end of World War II, Germany was divided into occupation zones, with each ally—the United States, France, Great Britain, and the Soviet Union—in control of a zone. Berlin was in the Soviet sector, but it was agreed that it, too, would be divided, and the Soviets would allow the other allies access to it.

By the end of the 1950s, however, the Soviets wanted the other allies out of Berlin. They refused, and tensions escalated over the next few years.

When Soviet Premier Nikita Khrushchev met the new U.S. President, John F. Kennedy, in Geneva in June 1961, he reiterated his desire for the western allies to leave West Berlin and proposed a peace treaty on Soviet terms. The Western allies, however, had no intention of giving up their right of access to Berlin.

In early August 1961, the Soviet-controlled East Germans began cutting off all avenues of escape to West Berlin—the 97 miles surrounding the city and the 27 miles that cut through the heart of the city. The Soviets and East Germans moved in with a massive show of force, and Kennedy called 148,000 National Guardsmen and Reservists to active duty. 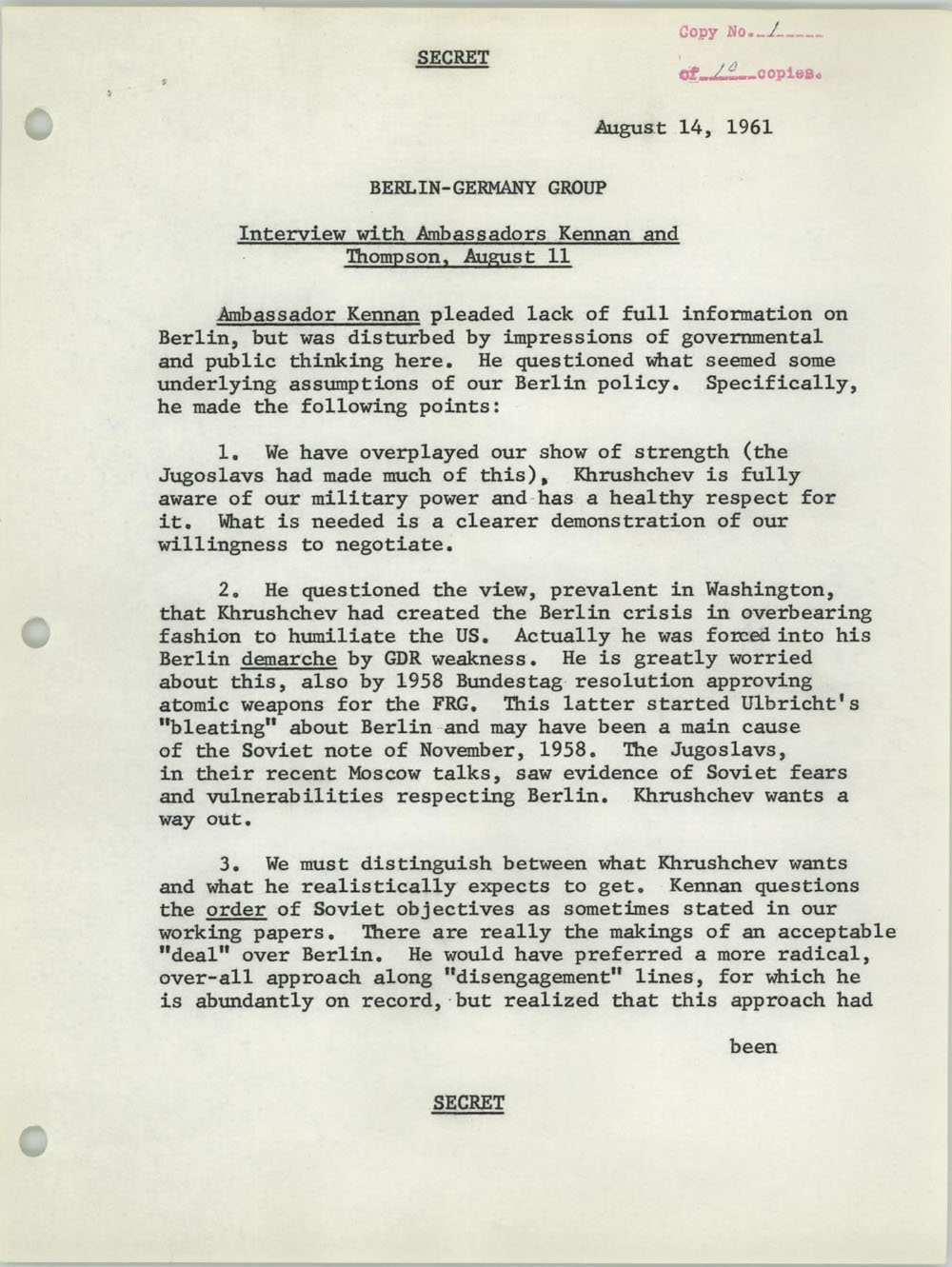 An August 11 summary reports Ambassador George F. Kennan s belief that the time might be right for an acceptable deal over Berlin. Kennan felt that the United States was misreading Khrushchev s overbearing posture and believed the Soviet premier respected U.S. might and sought a way out. Interview with Ambassadors Kennan and Thompson, August 11, 1961; Berlin Germany Group 1961; Policy Planning Council; Subject Files, 1954—1962; General Records of the Department of State; Record Group 59. 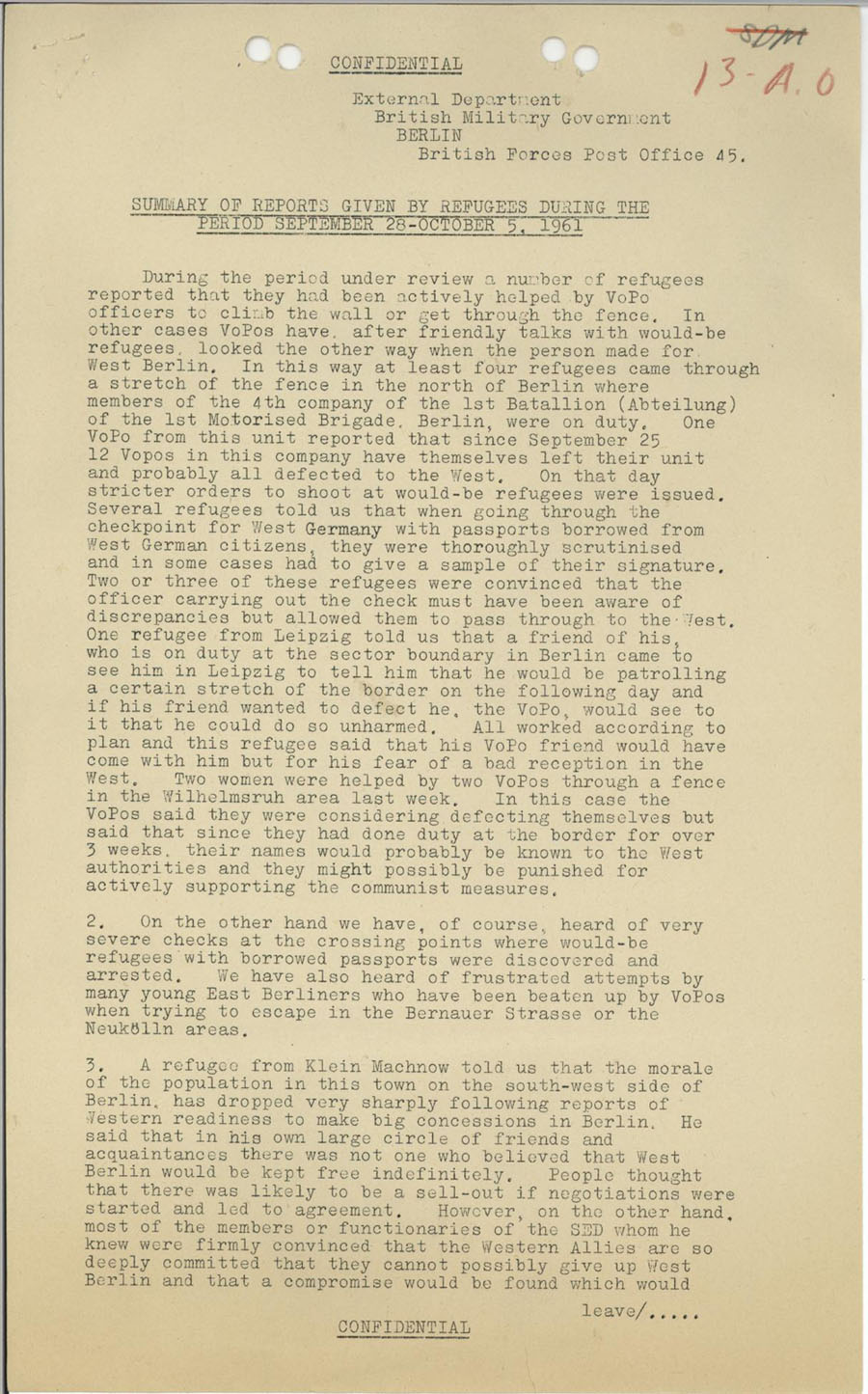 A confidential report on information gathered from would-be refugees attempting to escape during the early months of the Berlin Wall notes the assistance of East German guards, the use of borrowed passports at checkpoints, and an order to shoot at escapees.Summary of Reports Given by Refugees During the Period September 28—October 5, 1961; Bureau of European Affairs, Country Director for Germany: Records Relating to Berlin and East German Affairs, 1957—1968; Lot 70D4; General Records of the Department of State; Record Group 59.

And the East Germans began to build a wall, a tangible symbol of what Winston Churchill had called the "iron curtain" dividing Soviet-controlled Eastern Europe and Western Europe.

Once the wall was up, the access checkpoints became points of contention. On October 27, 1961, the Soviets deployed 10 tanks on their side of Checkpoint Charlie, and U.S. and Soviet tanks stood a mere 100 yards apart from each other. The confrontation made headlines around the world, and until Moscow and Washington mutually agreed to pull back, it looked as if the Cold War would become hot.

Throughout the summer of 1961, the story unfolded in dozens of reports, meetings, and discussions on an Allied response against a backdrop of possible nuclear war.

Roughly 500 recently declassified documents were published jointly by the National Archives and Records Administration's National Declassification Center and the Central Intelligence Agency's Historical Publications Office and distributed in conjunction with a conference on "A City Torn Apart: Building the Berlin Wall" at the National Archives in Washington, D.C., on October 27, 2011.

The Berlin Wall would stand for another 28 years before the people of East Germany would peacefully rise up and regain their freedom. 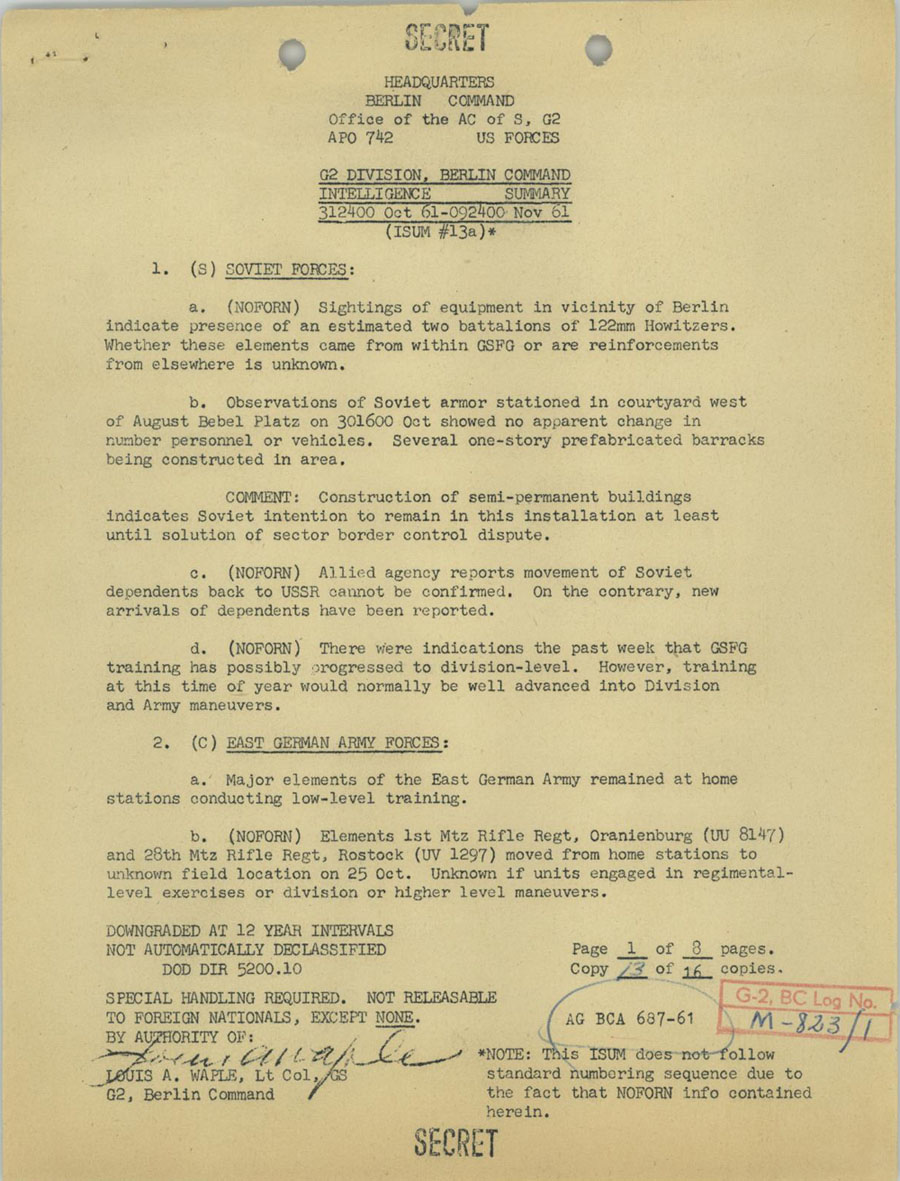 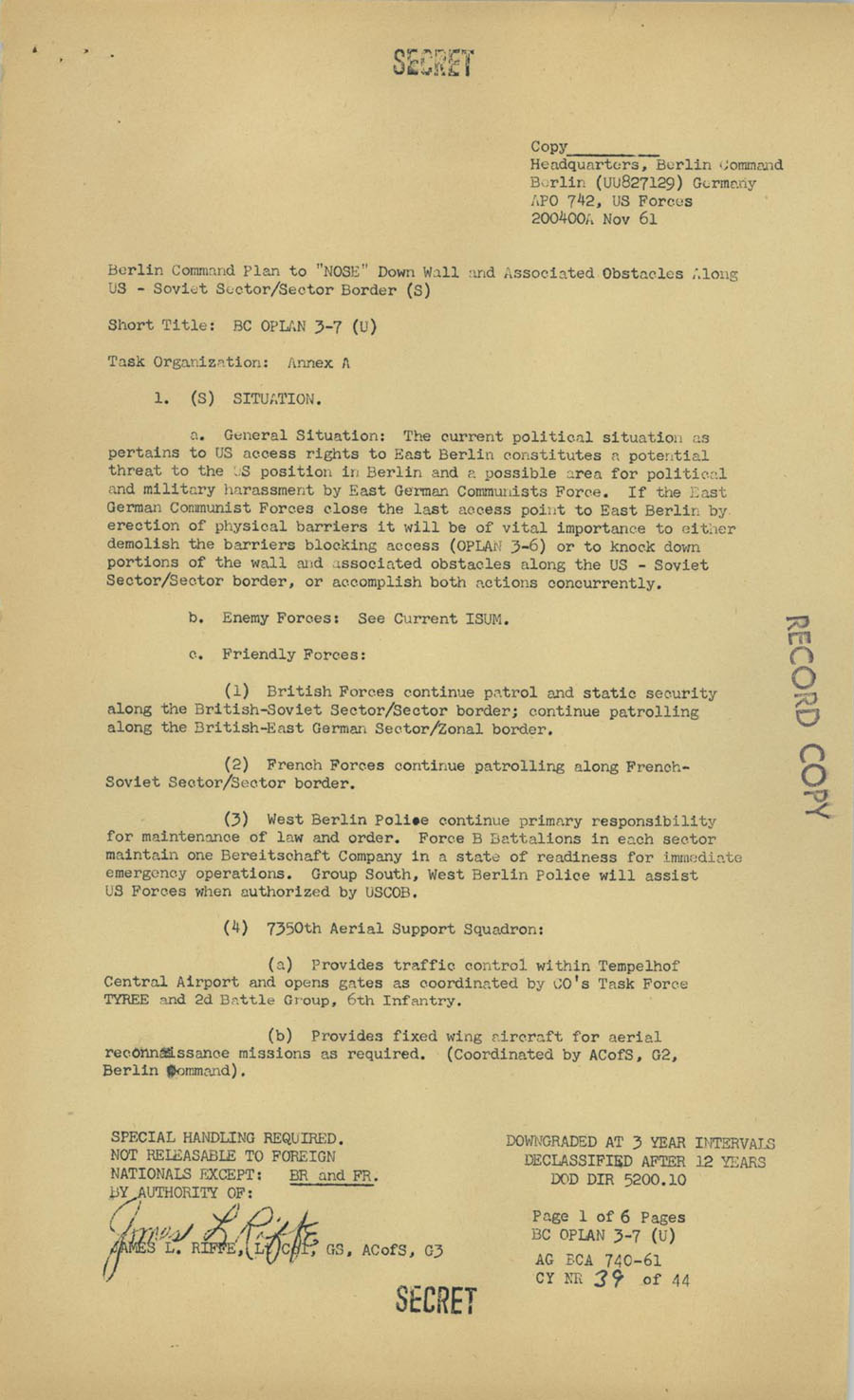 More documents can be found in the CIA's Berlin Wall Collection.