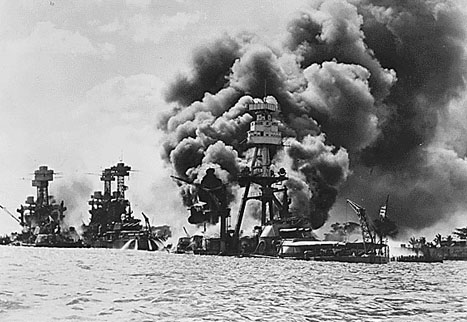 The Japanese navy's surprise attack on Pearl Harbor on Sunday, December 7, 1941, is etched in the memories of generations of Americans. The story has been told many times in print and on film.

Seventy years ago, even as Japan's envoys to Washington were receiving last-minute instructions from Tokyo for their meeting with the U.S. secretary of state, Japanese aircraft carriers and battleships stealthily moved into position in the Pacific northwest of Hawaii.

Most of the U.S. battleships in the Pacific were in port at Pearl Harbor, and U.S. fighter planes were clustered together on their airfield—making easy targets for an enemy. American soldiers and sailors had enjoyed another peaceful Saturday night, and early risers were waking up to a sunny Sunday morning.

A sighting of unidentified planes by radar station operators minutes before the attack was discounted by an officer at the command center headquarters, squandering time that could have been used to prepare defenses. Suddenly, planes bearing the red sun swept in, and the bombing began. Before the day was over, 2,403 Americans were dead, and our Pacific Fleet was in ruins.

Even in this time of crisis, however, records were being created on board the ships docked in Pearl Harbor—records that are now part of the holdings of the National Archives. These are firsthand accounts from the logbooks of the U.S. Navy's ships and stations compiled from 1941 to 1978. And they provide some insight into the events of the day—before, during, and after the attack— through the eyes of those who witnessed it.

The day—the one that President Franklin D. Roosevelt said would "live in infamy"—started out routinely, as the deck logs show. To maintain an accurate description of events as they happened, the assigned officer placed entries into the log every four hours. The intervals are found at the beginning of each entry as seen in the excerpts below. For instance, before the first entry from each ship you will see the number 4–8 or a variation thereof. This represents the time period from 4 a.m. to 8 a.m.

Navy ship deck logs are the "running record" of all events that occur aboard a naval vessel. Deck logs were, and are, kept for both legal and administrative reasons. Generally, the deck logs document a ship's movements and encounters along with the accidents, injuries, deaths, disciplinary actions, and provisions of her crew.

In addition, the names of the ship crew members were also included in the logs when mustered in or when charged with a crime. The vast majority of these entries document routine functions carried out aboard a ship, yet those entered at Pearl Harbor on December 7, 1941, also capture elements of the shock and confusion brought by the Japanese attack.

Although heavily damaged, the USS Maryland was also active in the rescue efforts. The ship was able to rescue 25 survivors from the USS Oklahoma, transferring some to the USS Solace. Meanwhile, the USS California was nearly destroyed, and its crew was ordered to evacuate as burning fuel oil on the surface of the water threatened the ship. However, the flaming oil slick cleared the ship, and the crew returned to battle mode.

4–8
Moored as before. 0630 Received the following provisions for use in general mess, inspected at [sic] to quantity by Lt (jg) J.R. HANSEN, USN., and as to quality by PARCHESKI, P.C., PhMlc., from Dairyman's Association Ltd.: ice cream—6gals. 0755 Japanese planes commenced bombing Pearl Harbor Area. Held general quarters, manned all guns, commenced breaking out powder. Commenced emergency repairs on main engines to get underway. Captain on the bridge.

8–12
Moored as before. At 0808 opened fire with 5" guns (#4 and #5 in local control) at Japanese planes over Ford island and with all machine guns on attacking planes as they flew low past the nest heading to Northward from vicinity of Ford Island. At 0813 attacking plane shot down by combined fire of nest and crashed in vicinity of CURTIS. At 0818 opened fire with 5" guns (#1 and #2 in director control) at horizontal bombers passing overhead in direction of Schofield Barracks. At 0825 opened fire with fwd 5" and machine guns at planes strafing nest from direction of Pearl City. At 0826 planes crossing low ahead of nest to NE were taken under fire; one burst into flames and crashed in clump of trees in Aiea Heights and exploded. At 0830 plane diving toward Ford Island from NE was shot down by combined fire of nest. At 0855 opened fire at planes strafing ahead and astern. At 0908 one plane attacking on stbd bow was shot down by nest and crashed in directions of Schofield Barracks. At 0920 opened fire on planes diving from port side of nest. 1045 REID got underway and stood out of channel. 1100 opened fire with #1 and #2 guns on planes attacking on port bow. 1104 Ceased firing. Rounds fired gun #1, 20; gun #2, 24; gun #4, 30; gun #5, 40; machine guns 2500 rounds. 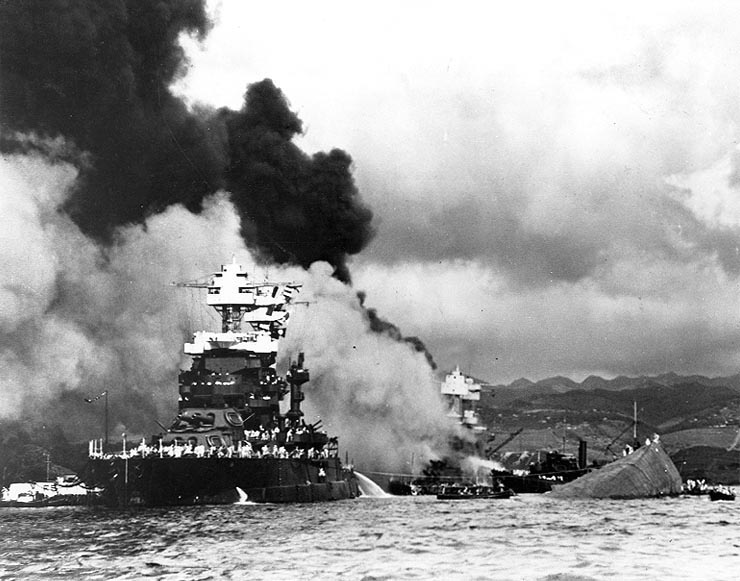 8 to 12.
Moored as before. Manning battery at General Quarters. 0803 After machine guns opened fire on Japanese Torpedo Planes. 0808 Opened fire on horizontal bombers with main battery. 0810 Commenced preparations for getting underway in accordance with signal flying on signal tower. 0811 Opened fire on dive bombers with main battery. 0820 Lull in air attack. Ceased fire. 0840 Opened fire to repel straffing attack. 0842 Following machine gun fire from after machine guns, glide bomber was observed veer away from ship with smoke trailing from it; it passed over Planning shop and disappeared in cloud of smoke issuing from Drydock #1. 0900 Sighted twelve scattered planes over Ford Island. 0903 Air raid resumed. Opened fire with main battery. 0910 Dive bombers attacked ships at Pier 19, bombs fell in water near ship, ahead and astern, within 25 yards if ship. As a result of bomb fragments, three casualties occurred as follows; the first two of which were subsequently transferred to the Naval Hospital, Pearl Harbor for further treatment, following first aid treatment by R.G. VLIET, CPhM, USN: GROUND, Orla L., 372 12 45 f3c, USN, suffered a wound, left lower lef #2576, condition not serious; MOORE, Grover C., Jr. 256 33 15, Seal, USN, suffered a lacerated wound in the left scapular region #2563, condition not serious; Smith, Fred A., 310 84 65, GMlc, USN, suffered a superficial wound in the right thigh #2576, condition favorable. Commander L.P. LOVETTE, USN. Commander Destroyer Division FIVE reported aboard to Commander Destroyer Squadron THREE for temporary duty, the CASSIN, flagship, Destroyer Division FIVE having been destroyed in drydock by bombing. 0920 A Karigane Fighter Plane was observed to break into heavy smoke as it veered in direction of West Loch. 1000 Opened fire to repel horizontal bomber attack from southward. 1002 Gunfire from main battery knocked wing off horizontal bomber. 1015 . . . officers from U.S.S. Case, unable to return to their own ship, reported on board to Commander Destroyer Squadron THREE for temporary duty. SHED, J.W., CRM (AA), USN reported on board for temporary duty from U.S.S. PREBLE. 1040 Underway in accordance with general signal directing sortie and verbal orders of Commander Destroyer Squadron THREE, proceeding out of harbor on various courses at various speeds on boilers #1 and #2; Captain at the conn Navigator on the bridge. Standard speed 15 knots. 1102 Passed channel buoy #1 a beam to starboard, and commenced observing International Rules of the Road. 1120 Changed speed to 10 knots; changed course to 200°T, distant about 1700 yards. Maneuvered to attack. 1127 Dropped three depth charges. Maneuvered to make second.

The logs also documented the confusion caused by the surprise attack, recording false reports and tense investigations of unidentified ships and sonar contacts. The USS Maryland received erroneous reports that a group of Japanese troops had parachuted into Barbers Point Naval Air Station and onto the North Shore of Oahu island. In this log, the crew even gave descriptions of the mysterious group, describing them as wearing blue overalls with red emblems.

Many of the logs contained detailed accounts of the damage caused by the attack. In the two-hour attack, the U.S. Pacific Fleet was left nearly in ruins, with 8 battleships, 3 cruisers, and 188 airplanes destroyed. The log of the USS Medusa notes that the USS Utah settled on its port side after being attacked. It also reported ships that were hit by air torpedoes and sank. Many also reported their own success, including the USS Dale, which recorded prominently that the ship was able to shoot down an enemy aircraft. The Maryland reported crew members performing several diving efforts to repair damaged parts to save the ship. 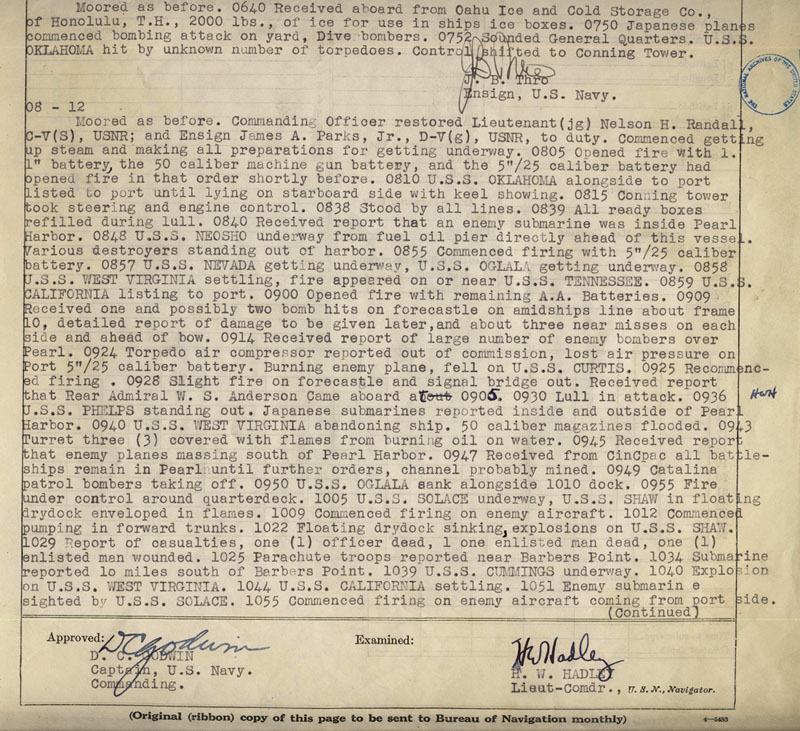 Enlarge
The deck log of the USS Maryland for December 7, 1941. (Records of the Bureau of Naval Personnel, RG 24) 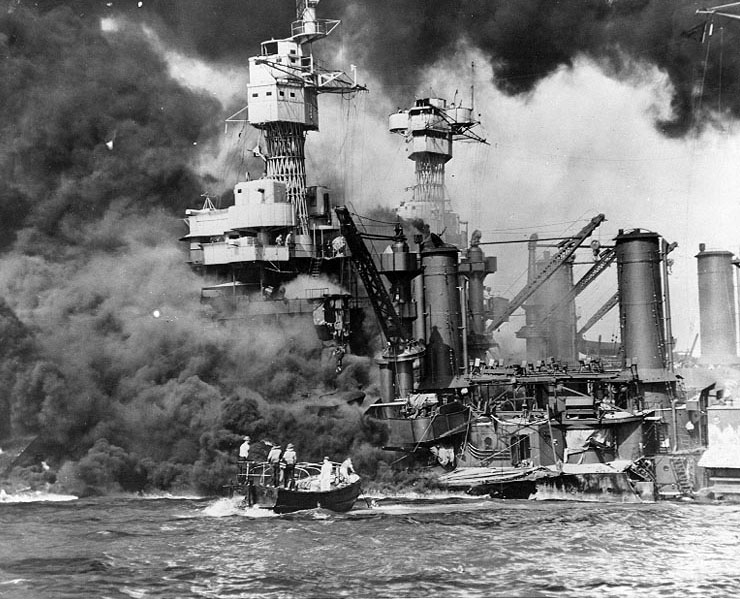 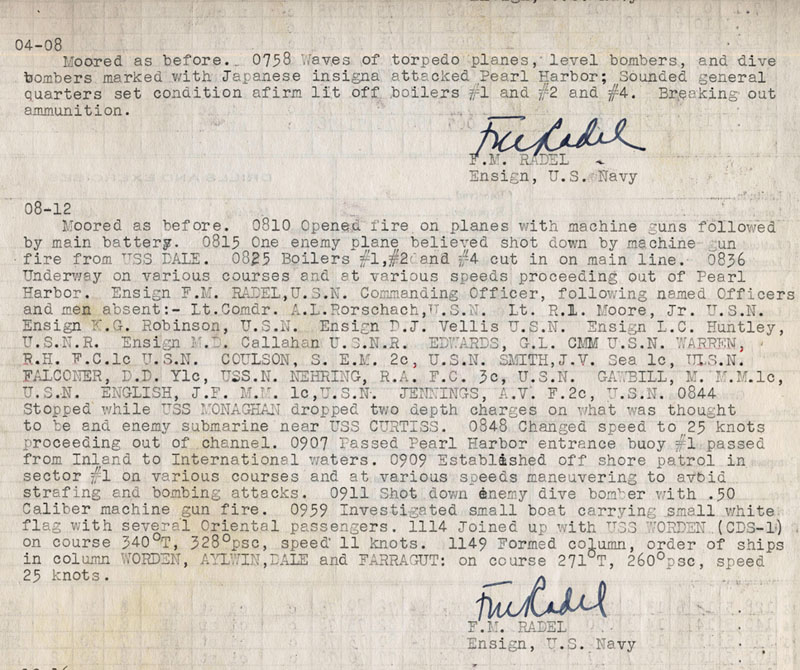 Enlarge
The deck log of the USS Dale for December 7, 1941. (Records of the Bureau of Naval Personnel, RG 24)

One thing missing from the logs, are the many acts of heroism that reflect the spirit of patriotism among nearly all who served the military during this period. One sure example of heroism missing from the logs is that of Cook Third Class Doris "Dorie" Miller, assigned to the USS West Virginia. Like many of the African Americans who joined the Navy, Miller was stationed in a position where he would never engage in a combat situation.

However, during the attack, Miller became more than just a cook. After retrieving his ship's mortally wounded captain, Miller manned a 50-caliber Browning antiaircraft machine gun. Miller fired at the Japanese planes until he was ordered to abandon ship. The inexperienced Miller shot down between four and six Japanese planes. For his efforts, Miller was awarded the Navy Cross, becoming the first African American to receive that citation. Adm. Chester W. Nimitz, the commander in chief of the Pacific Fleet, personally presented the award to him.

Following the devastating attack, Congress declared war on Japan, bringing America officially into World War II. All of the Pearl Harbor battleships save three, the USS Arizona, the USS Oklahoma, and the USS Utah, were raised, rebuilt, and put back into service during the war.

With time, old wounds heal and memories fade, leaving important events reduced to a point in a timeline. The attack on Pearl Harbor was one of those rare galvanizing events that united the nation behind a single cause. Such an episode was not to be repeated in American history until the terrorist attacks of September 11, 2001.

Through these entries drawn from deck logs—created as routine administrative documents—modern readers can get a sense of the shock, surprise, and confusion felt by the soldiers and sailors who experienced this pivotal moment in American history firsthand.

The authors, members of the Holdings Management Division, were part of the team that processed Navy Deck Logs, 1941–1979, between October 2009 and October 2010 at the National Archives at College Park.

Zachary Dabbs joined the National Archives and Records Administration in 2009. He received a bachelor's degree in history from the University of Wisconsin–Madison in 2007 and earned a masters degree from New York University's archival management program in 2009.

Eliza Mbughuni joined the National Archives and Records Administration in 2008 as a student while working for a masters degree at the University of Maryland College, College Park. She received a bachelor's degree in history from the University of Wisconsin–Madison in 2004.

The deck logs of vessels at Pearl Harbor on December 7, 1941, are part of the Records of the Bureau of Naval Personnel, Record Group 24. The records are located at the National Archives and Records Administration (NARA) in College Park, Maryland, in the Modern Military Branch. Logs included in this article were from the following ships: USS Chew (DD-106), USS Conyngham (DD-371), USS Cummings (DD-365), USS Dale (DD-353), USS Maryland (BB-46), USS Medusa (AR-1), and USS California (BB-44).

Every effort has been made to produce a faithful transcript by retaining the capitalization, punctuation, and overall structure of the document. However in order to preserve space and improve readability the authors have silently corrected spelling errors and have omitted long technical descriptions and long lists of names.