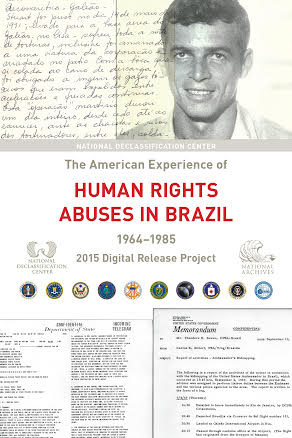 Brazil’s revolution of 1964 had its roots in more than a decade of increasing social tension and political polarization, complicated by mounting Cold War tensions in Latin America. Poor farmers had called for a redistribution of the land held in large estates—a move they felt would spur agricultural and economic development. Strikes and work stoppages advocated an increase to the minimum wage, which would benefit the urban poor. These developments were viewed with suspicion both by conservative industrialists and, especially, by the joint armed forces. Both groups became increasingly alarmed by what they saw as Communist infiltration and the expansion of subversive activities in Brazil.

The Brazilian military-conservative bloc saw civilian politicians who were sympathetic to the Labor movement as part of that Communist threat, and thus attempted to dislodge more liberal politicians from their elected offices or prevent them exercising constitutional power. This larger political role played by the military affected the career of João Goulart, appointed Minister of Labor by populist President Getúlio Vargas and later elected Vice President and then President of Brazil. As Labor Minister, Goulart supported among other social welfare programs a 100% increase in the minimum wage for the urban working class.  Once this increase was signed into law, backlash from media moguls, industrialists and the military led to his resignation in February of 1954—and ultimately to a political crisis culminating in Vargas’ suicide.

In August of 1961, as Vice President under Jânio Quadros, Goulart was away on a trade mission to China when President Quadros resigned.  Instead of permitting Goulart, whom they felt was a Communist sympathizer, to assume the presidency in accordance with the Brazilian constitution, a coup by three military leaders led to the creation of the post of Prime Minister. Many of the presidential powers were transferred to the newly-created office, and Goulart was permitted to serve as head of state only, without parliamentary authority, until a 1963 referendum rejected the constitutional change. Goulart’s Basic Reforms Plan platform promised redistribution of large non-productive agricultural properties, the application of 15% of Brazil’s income to educational programs, socializing the profits of multinational companies and applying them to re-investment in Brazil, and the extension of voting rights to illiterate citizens and low-ranking military officers. The military-conservative bloc labeled it a “socialist threat” intended to “Bolshevize” Brazil, and between March 31 and April 2, 1964, another coup deposed Goulart.  Within months, Institutional Act 2 dissolved all political parties and established indirect elections, entrenching a military rule that was to last two decades.

US citizens living and working in Brazil were caught up in the events of these decades.  Some employees of the Department of State were observers and reporters. Other Americans were imprisoned and interrogated, later to report on what they saw and experienced. Some searched for family who had disappeared.

“Policemilitary investigations” assessed many hundreds of people and organizations that were deemed subversive.  Thousands were detained—many arbitrarily—and held without trial.  By 1968, the military government had suspended habeas corpus and instituted systematic interrogation, not only to obtain information on subversion but also to discourage opposition. These abuses had more of an effect on Brazilian citizens, but also affected dual citizens, American aid workers, and even travelers on business.

The following documents tell the story of some of the Americans involved: 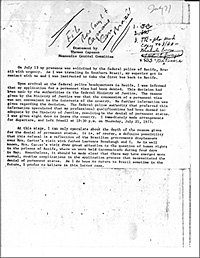 Mennonite Central Committee member Thomas Capuano and Catholic Father Lawrence Rosebaugh were arrested in Recife in 1977, detained without charge, and denied their right to inform the U.S. Consulate of their arrest. 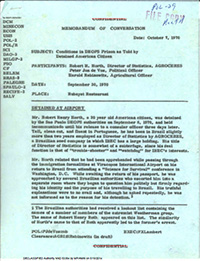 This memorandum of conversation contains a report by U.S. businessman Robert Henry Horth, detained by military police who had confused him with a member of the extremist Weather Underground.  Horth relates what he heard from fellow Brazilian prisoners about torture at a prison where he had been held in downtown Sao Paulo. 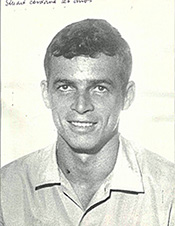 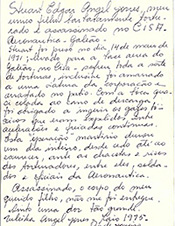 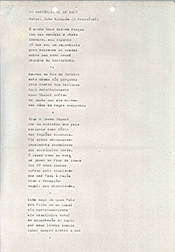 Stuart Edgar Angel Jones was a dual citizen and member of the extremist group Movimento Revolucionário 8 de Outubro (MR-8). Jones disappeared on May 14, 1971, and died in detention at the Centro de Informações de Segurança da Aeronáutica (CISA) two days later. His mother, Brazilian fashion designer Zuzu Angel, was regularly unable to obtain information regarding her son’s whereabouts from the military government. She appealed to the American consulate in Sao Paulo for assistance. 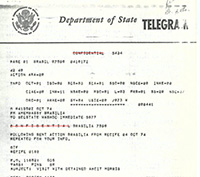 Methodist missionary Frederick Morris was arrested on September 30, 1974. Agents of the Fourth Army administered beatings and electric shocks while he was detained in an attempt to get Morris to admit to serving as liaison between Dom Helder Camara—a prominent human rights activist in Brazil—and the Communist Party of Brazil. 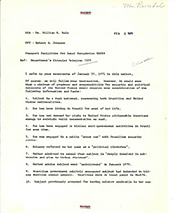 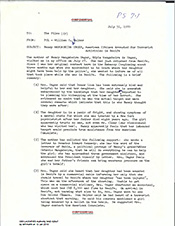 Nancy Mangabeira Unger, a member of the radical Partido Communista Brasileiro Revolucionário (PCBR), was arrested by the Brazilian military government for involvement in terrorist activities, including bank robbery, carjacking, and conspiracy to kidnap the American consul general. During her arrest, she was shot several times. The Brazilian government released her on January 13, 1971, in exchange for the kidnapped Swiss consul.
See also Passport for Nancy Unger 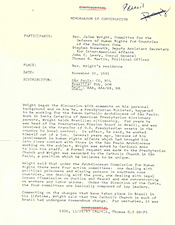 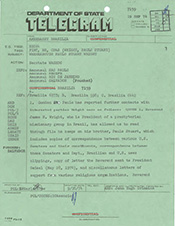 Reverend Jaime Wright, a Presbyterian missionary with American parents, spent years trying to sort rumor from the facts surrounding the 1973 arrest and disappearance of his brother, Paulo Stuart Wright.

American Observers and the Struggle for Rights

This letter from John Hugh Crimmins, of the U.S. Embassy staff in Brasilia, to Harry H. Shlaudeman, the Assistant Secretary for Inter-American Affairs, describes some of the main difficulties faced by diplomats attempting to protect human rights for citizens of sovereign nations: 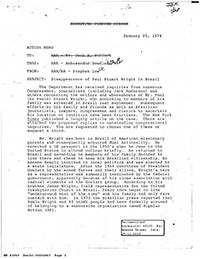 High-profile American interest surrounded the 1973 disappearance of Paulo Stuart Wright, who had been born in Brazil to American parents but had not maintained his American citizenship. This action memorandum from January 25, 1974, suggests a couple options that balance responding to Congressional requests for action about Wright’s whereabouts with the Brazilian perception that Wright’s case involved a known subversive Brazilian citizen. 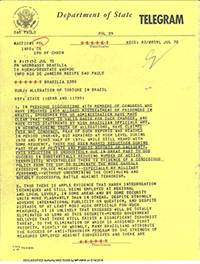 This telegram of July 1, 1972 clearly shows Ambassador William M. Rountree's lack of confidence that the US could put effective pressure on the Government of Brazil to further reduce incidents of torture: "...efforts by any branch of US Government or by US political figures to bring pressure on Brazil would not only damage our general relations but, by equating reduction in anti-terror measures with weakness under pressure, could produce opposite of intended result." Rountree does express that he feels the US should express "on appropriate occasion and in appropriate manner" that it does not condone the use of excessive force against detainees. There is also a handwritten note left in the margin by a State Department staffer "i.e. never and by saying nothing". 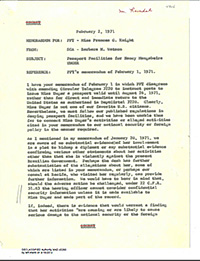 In a memorandum written in response to the derogatory on Nancy Unger, Barbara M. Watson defends the right of dual national Nancy Mangabeira Unger to a U.S. passport valid for 6 months. Watson, in defending this right, cites both a lack of "any substantial evidence confirming various other statements about her activities other than that she is violently against the present Brazilian Government" and the requirement that any confidential security information used to support the denial of a passport must be made available to the applicant.

Mistreatment or abuse experienced firsthand, or heard recounted by others, is often a first step in radicalization.  Those who feel they have been wronged may then organize to seek to right that wrong. A cycle of increasing violence may then develop.   Some U.S. diplomats observed this progression in the Brazilian citizens around them. 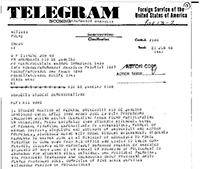 In Brazil, many opposition groups advocated peacefully for a return to democracy, but military police sometimes deployed tear gas against, arrested, and detained peaceful protestors. 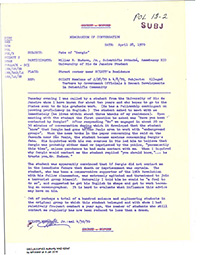 This memorandum of conversation from early 1970 describes how "Sergio", a member of a university scientific club and contact of Scientific Attaché Miller N. Hudson, Jr., was detained as a suspected terrorist and beaten until he lost consciousness. 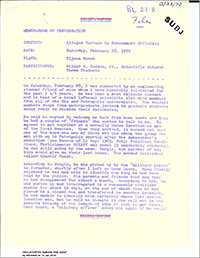 Sergio's friend later told Hudson that Sergio had joined an underground group, and was considering joining a terrorist cell himself. 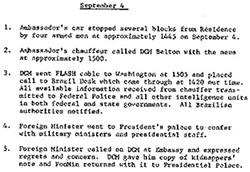