Prior to 1896, tribal governments exercised jurisdiction over citizenship and tribal enrollment. With an act of Congress on June 10, 1896, the Dawes Commission was authorized to receive written applications for citizenship and to add names to pre-existing tribal rolls.

The Act also allowed for applicants to appeal the Commission's
decisions to the U.S. District Courts of Indian Territory. Out of the 7,500 applications, the Courts received more than 1,000 appeals.

This application process was later ruled null and void. The subsequent Curtis Act of 1898 required all individuals and families to apply to the Dawes Commission even if they had submitted an 1896 Application.
The 1896 Application is referenced on the Dawes Census Cards as "1896 Case" followed by the case number. See the Dawes Rolls for more information. Note: the 1896 Applications are not the same records as the Dawes Enrollment Jackets.

1896 Application files can include:

After the appeals, this application process was later ruled null and void. Subsequently, the Curtis Act of 1898 required all individuals and families to re-apply to the Dawes Commission. The 1896 Application can be noted on the Census Cards as "1896 Case" followed by the case number. See the Dawes Rolls for more information.

These individual documents are indexed and available online at Ancestry.com (database titled U.S., Native American Applications for Enrollment in Five Civilized Tribes (overturned), 1896). Prior to digitization, these records were accessible via microfilm publication M1650 Applications from the Bureau of Indian Affairs, Muskogee Area Office. Relating to Enrollment in the Five Civilized Tribes under the Act of 1896. Visit the National Archives Catalog for the full archival records description: National Archives Identifier 268520.

The Choctaw and Chickasaw tribal governments disagreed with some of the citizenship and tribal enrollment decisions made by the Dawes Commission and the U.S. District Courts. To review these decisions, Congress authorized the establishment of a Choctaw-Chickasaw Citizenship Court (CCCC). From 1902-1904 the court heard 256 cases involving 3487 people.

Original papers filed in proceedings held by the CCCC included:

CCCC case information is noted on the Dawes Census Card by the acronym "CCCC" followed by a case number, and the letter "M" (McAlester) or "T" (Tishomingo) to indicate where the trial was held. These records are not currently digitized. 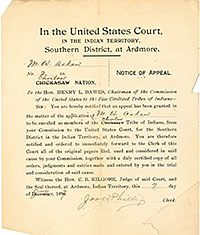 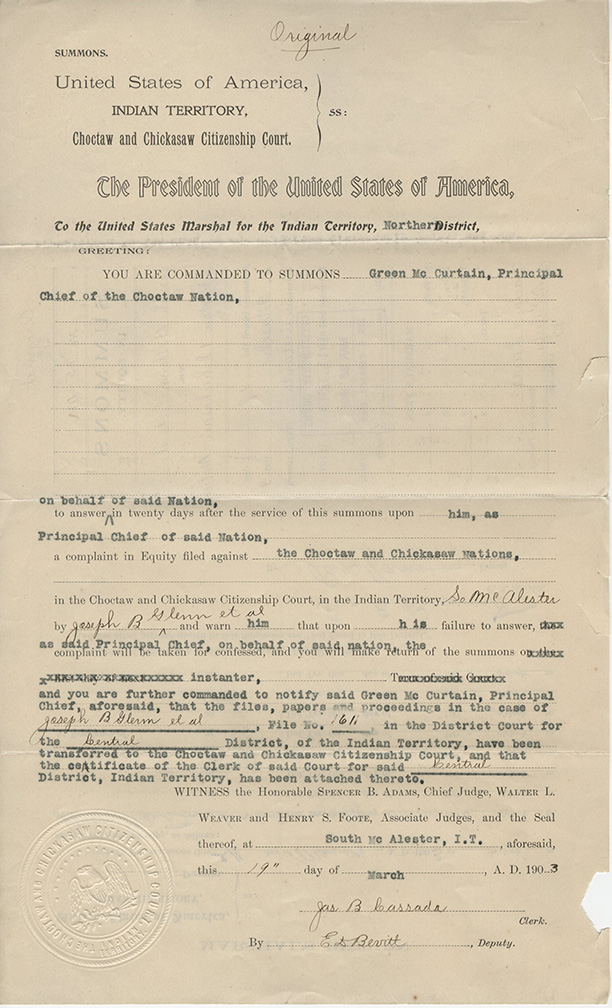