The Shape of Our Government: Amending America

Only 27 times - out of more than 11,000 proposals - have Americans reached consensus to amend the Constitution.

It is difficult - but not impossible - to turn an idea into an amendment. So few amendments have been successful because our Constitution sets a high bar to pass amendments. So, what kinds of proposals achieve enough support to become a ratified amendment?

Explore selected stories about how we have attempted to change the shape of our government.

The Founders who wrote the Constitution were uncertain it would work. They were constructing new ways to run a government that had never been tried before. It's not surprising, then, that time would reveal some flaws or inefficiencies that needed to be addressed. 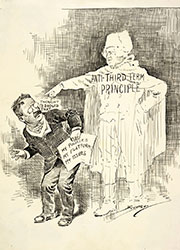 Only Two Terms for President
Theodore Roosevelt was the first President to seriously challenge the two-term limit precedent set by George Washington. When he was criticized for running a third time in 1912, he asserted that technically the 1904 campaign was his first true run for the Presidency. He originally took office in 1901 after President William McKinley was assassinated. Roosevelt lost the election. 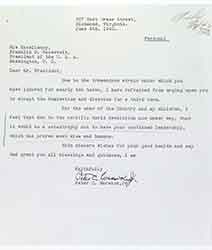 A Third Term during War?
When Franklin Roosevelt ran for an unprecedented third Presidential term in 1940, Europe was engulfed in the flames of World War II, and America would soon join. Less troubled with breaking George Washington's precedent, many Americans wanted the most qualified person to lead the nation during war. After Roosevelt won a fourth term, the 22nd Amendment limited future Presidents to two. 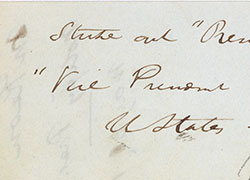 Acting President?
William Harrison was the first President to die in office, in 1841. Vice President John Tyler was sworn in, but Congress couldn't agree on whether he was President or Acting President. This resolution failed, and Tyler assumed the full duties of President. However, many questions about Presidential succession remained unaddressed until the 25th Amendment in 1967.

Motion to amend the resolution to strike out "President" and insert "Vice President now exercising the office of President," May 31, 1841, Records of the U.S. House of Representatives 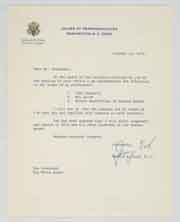 Political Crisis Averted
Without the 25th Amendment, the nation may have faced a political crisis in 1974. Accused of tax evasion, Vice President Spiro Agnew resigned in 1973, then President Richard Nixon resigned during the Watergate investigation in 1974. Both offices would have been vacant, but under the 25th Amendment, the President could nominate a replacement. Nixon asked Congressman Gerald Ford for recommendations, but ultimately chose Ford himself. Tie Vote for President
There was a 73—73 tie vote in the electoral college in the 1800 Presidential election. It was resolved only after Alexander Hamilton encouraged the House of Representatives to elect his adversary Thomas Jefferson over his future mortal enemy Aaron Burr. In 1804, the 12th Amendment modified the electoral college, ensuring that a tie vote would not occur again.

Electoral college tally for the 1800 Presidential election, February 11, 1801, Records of the U.S. Senate Resolutions of the Commonwealth of Massachusetts to amend the Constitution to abolish the electoral college and establish direct popular election of the President, May 15, 1969, Records of the U.S. House of Representatives 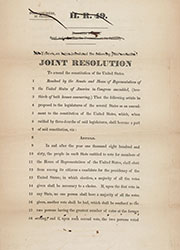 Electing a President by Lot
We could choose our President by picking a ball from a bowl. This was one of many ideas suggested in Congress for replacing the electoral college system devised by the Founders. The randomness of this method may have been an attempt to sidestep growing sectional rivalries before the Civil War.

H.J. Res. 8 proposing a constitutional amendment to elect the President by lot, January 13, 1846, Records of the U.S. House of Representatives.