Trial of the Century: La Amistad 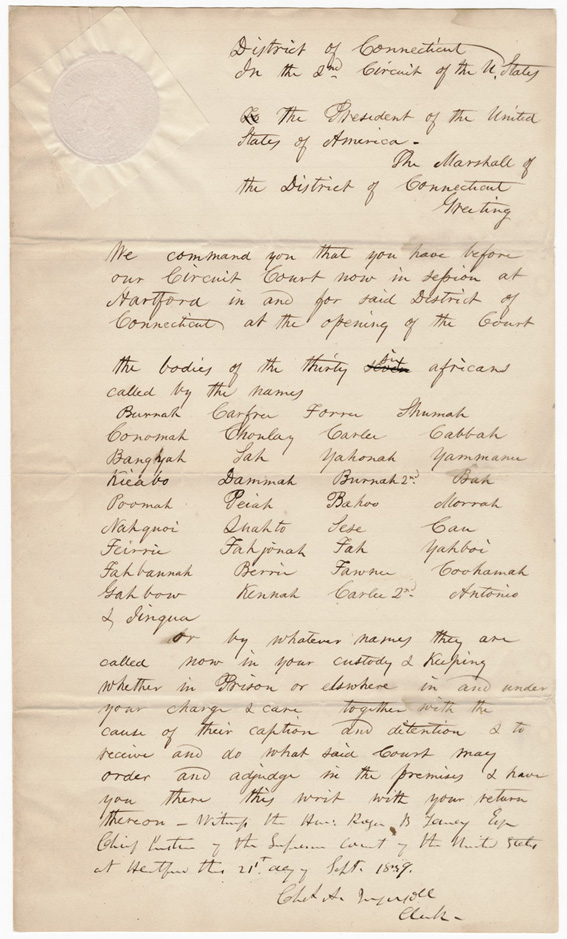 "...each of them are natives of Africa and were born free, and ever since have been and still of right are and ought to be free and not slaves . . ."

In February of 1839, Portuguese slave hunters abducted a large group of Africans from Sierra Leone and shipped them to Havana, Cuba, a center for the slave trade. This abduction violated all of the treaties then in existence. Fifty-three Africans were purchased by two Spanish planters and put aboard the Cuban schooner Amistad for shipment to a Caribbean plantation. On July 1, 1839, the Africans seized the ship, killed the captain and the cook, and ordered the planters to sail to Africa. On August 24, 1839, the Amistad was seized off Long Island, NY, by the U.S. brig Washington. The planters were freed and the Africans were imprisoned in New Haven, CT, on charges of murder. Although the murder charges were dismissed, the Africans continued to be held in confinement as the focus of the case turned to salvage claims and property rights. President Van Buren was in favor of extraditing the Africans to Cuba. However, abolitionists in the North opposed extradition and raised money to defend the Africans. Claims to the Africans by the planters, the government of Spain, and the captain of the brig led the case to trial in the Federal District Court in Connecticut. The court ruled that the case fell within Federal jurisdiction and that the claims to the Africans as property were not legitimate because they were illegally held as slaves. The case went to the Supreme Court in January 1841, and former President John Quincy Adams argued the defendants' case. Adams defended the right of the accused to fight to regain their freedom. The Supreme Court decided in favor of the Africans, and 35 of them were returned to their homeland. The others died at sea or in prison while awaiting trial.

The records of the case heard in US District Court and US Circuit Court for Connecticut are in the holdings of the National Archives at Boston.